Subscription beauty service Birchbox is launching a new, pricier tier to its service, offering customers the ability to better customize their monthly box of products, along with other perks. The service, which is only being offered to current subscribers for the time being, is $14 per month, compared with $10 per month for the original subscription.

The launch comes after a time when Birchbox had been in the press due to its struggles with achieving profitability. As Recode reported in August when the startup received a $15 million lifeline from investors in the form of a convertible note, the company had faced numerous challenges over the past year or so. This included a rash of newer competitors like Michelle Phan’s Ipsy as well as layoffs. The report also suggested there may have been struggles with customer churn as current subscribers tired of their boxes, and inefficient marketing spend. (Birchbox denies these claims.)

Birchbox had also shopped for a potential acquirer last year, The WSJ reported in June, but failed to achieve a deal.

The idea with Birchbox is to allow customers to sample beauty products – like makeup, hair and skin care items, among other things – through a monthly goodie box. Customers are then encouraged to buy the full-sized items online. But, as Recode noted, only 35 percent of Birchbox’s revenue came from the sale of full-priced products. (That 35 percent figure is still accurate, a Birchbox spokesperson confirmed.)

The company also has a retail store in New York, which contributes to sales.

In total, Birchbox has over 1 million subscribers, and 4 million total customers.

As for the new subscription itself, it appears to be aimed at sending customers more of the products they’re interested in, which would hopefully translate to more online sales. 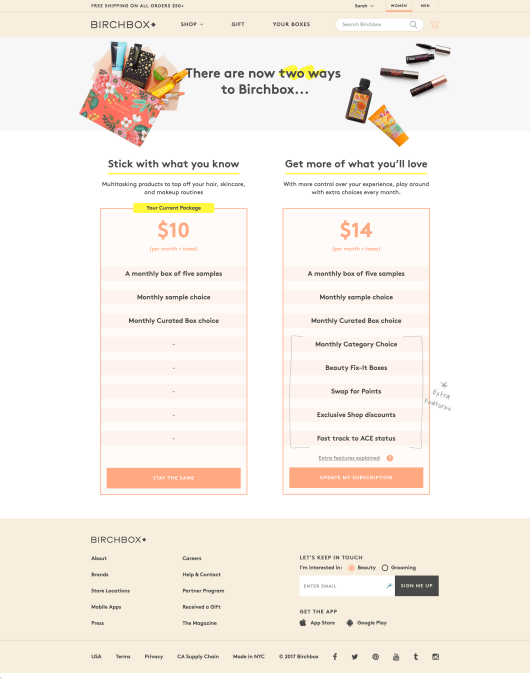 According to the Birchbox website’s description of the new service, the upgraded subscription still includes just five samples, but now allows customers to select which category of products they want to try or they can choose to receive a “fix-it” box (one focused on an individual issue, like acne, e.g. ) in lieu of the monthly sample box.

Customers can also swap boxes for points to be used while shopping online, receive special discounts and will be fast-tracked to “ACE” status (Birchbox’s VIP rewards program.)

These additions are meant to push Birchbox’s best customers to spend more shopping its online store, in an effort to grow its e-commerce sales.

The new service tier is launching in March, the website noted. It will not replace the $10 per month subscription when it arrives, but will be available as the next step up.

A Birchbox spokesperson confirmed the launch via the following statement:

We are always innovating to stay as relevant as possible to our customers; we introduced features like Sample Choice and, more recently, Ship with Box, to allow subscribers to have more control over their monthly experience. With the majority of our traffic coming from mobile, we rearchitected our mobile web design this past fall to make it faster and more seamless for customers to check out on their phones – resulting in our most successful holiday season to-date.

We are currently testing additional ways to allow subscribers to get the most out of their subscription. These new features have been in development for awhile and stem directly from customer research – we’re thinking strategically about what our subscribers want more of and how to execute on that in a way that makes sense for our business.