Ken Miller Contributor
Ken Miller is a technology partner at the Omidyar Network. Previously he was an executive at PayPal and Intuit, and early Board Advisor to Square.
More posts by this contributor

Since taking the presidency by surprise back in November, the Republican Party has been salivating on the unexpected opportunity laying before them — control of the White House and both chambers of Congress.

Even with the oddly unconventional behavior of the newly elected President Trump for them to juggle, Republicans recognize a mostly unobstructed opportunity to do what they like for at least the next two years.

This situation is a far cry from the 2013 post-election autopsy and self-diagnosis produced by the party in the aftermath of the 2012 election. The report, a post-mortem designed to identify what had gone wrong in Mitt Romney’s 2012 defeat, also served as a prescription for how to recalibrate and move forward. Much of the report focused on needed outreach to women and minorities, immigration reform and softening language to become a more inclusive and tolerant party.

But that 2013 game plan has since been shoved to the back of the Republican junk drawer. Republicans are celebrating their victory, and sharpening the knives to make good on Trump campaign promises — even the really questionable ones.

Lost on the party during this, however, would seem to be that they are statistically experiencing the ultimate political “dead cat bounce.”

The term comes from stock markets and refers to a sequence of events where a stock sees a temporary and brief recovery after a severe and prolonged decline, followed by a return to that same decline. The short recovery was really just a mirage as the underlying problems still exist, returning the stock to its initial, inertial free fall.

The key to understanding this phenomenon for the Republican Party is to look at changing U.S. demographics.

And that last percentage is shrinking. The U.S. Census Bureau now estimates that by 2044, no race or ethnicity in the U.S. will represent a majority of the population… and that includes whites. This sort of rapidity of a country’s population composition changing seems to be unprecedented.

The impact of this change has certainly been felt in recent elections. Local and state-level elections in regions with significant minority populations have consistently moved Democratic, and there is no real indication to believe this is changing anytime soon. It’s also been true at a national level. In this past November’s presidential election, Democrats benefited from 89 percent and 66 percent of African-American and Latino votes, respectively.

So what’s propping up the Republican Party right now, allowing them to sneak in a surprise like Donald Trump against all expectations? The easy (and lazy) answer is that it must be that the 62 percent of whites are still voting overwhelmingly for Republicans, offsetting these growing demographic changes. Though there is truth to that, digging a bit deeper shows it turns out to be a much more nuanced situation than just that. 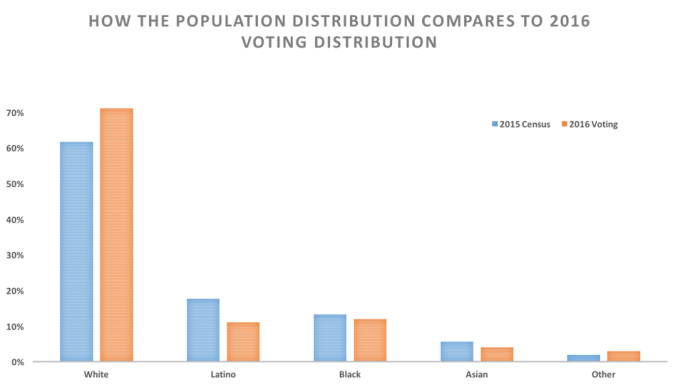 Most striking in this is that though whites currently only make up just shy of 62 percent of the U.S. population, they accounted for 71 percent of all voters this past November. The takeaway here is that white voters are having a disproportionate effect on the outcome of the election versus other predominant American races and ethnicities. As a whole, they are clearly taking their civic duty and constitutional privilege very seriously (or suppressing the vote of other ethnicities).

Furthermore, when you look at exit polling data, white voters as an entire group went fairly heavy to the Republican Trump over Democrat Hillary Clinton, 57 percent to 37 percent. The 20 percent margin of victory, coupled with that extremely high 71 percent of the overall voting pie, was enough to offset Democrats’ strong performance among minority voters and narrowly eke out an electoral college win for President Trump — a win largely determined by the unexpected upsets in Michigan, Pennsylvania and Wisconsin. 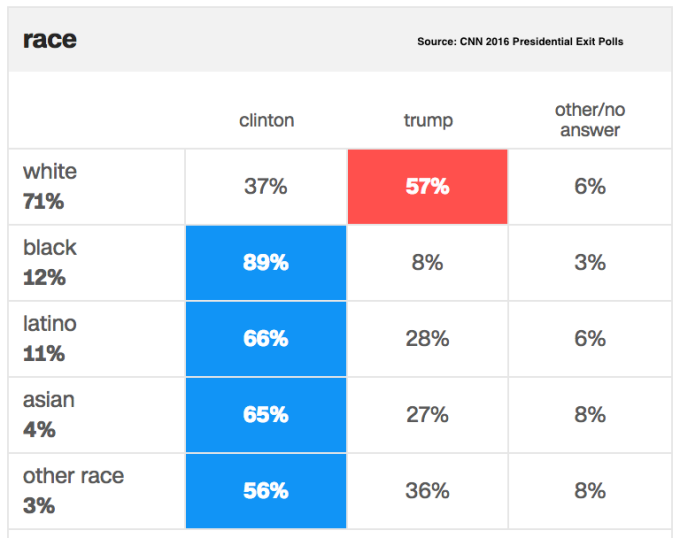 This is particularly compelling, because recent studies have shown that white evangelicals (and even white protestants more broadly) are generally decreasing as a percent of the U.S. population each election cycle (largely driven by the fact that younger generations are less religious, or at least less strident in their religion than older generations). Yet, the 26 percent of voters this year is consistent with the past couple elections and actually up from levels in the 1990s and early 2000s. 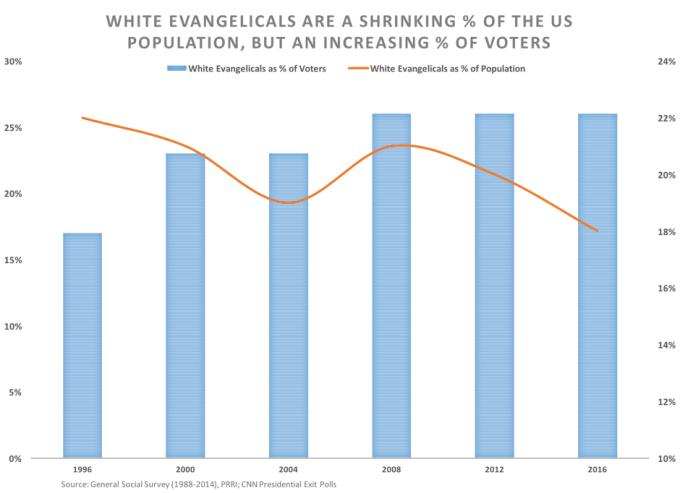 But at the same time that Republicans are having a very challenging time courting minority voters, it appears they are also struggling with the rest of white America — the non-evangelical whites — which is clearly much larger in size. In the 2016 election, non-evangelical whites comprised 63 percent of the total white vote and 45 percent of the overall vote… and it turns out they broke for the Democrat Clinton by a healthy 6 percent margin. 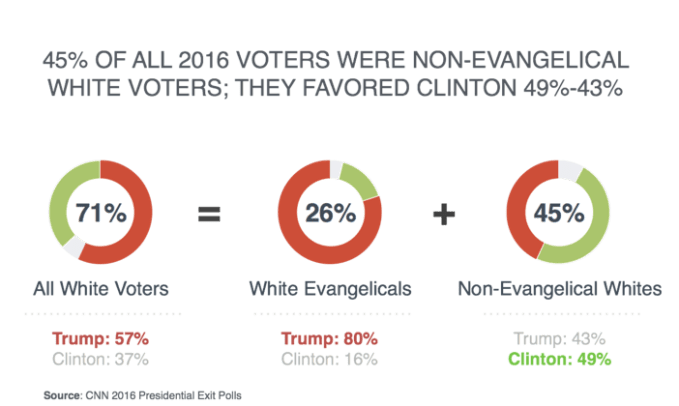 White evangelicals have done a tremendous and even historic job of propping up the Republican Party in the face of substantial demographic and ideological shifts in the nation. But implicit in all this data is that Republicans may have finally exhausted the segment that’s been most reliably carrying them in recent elections.

Given that the percent of the population that identifies as white evangelical is shrinking, while at the same time the portion that is showing up in the voting booth is increasing, there may not be many more white evangelicals for the Republican Party to lure to the voting booth. Of the estimated 41 million who are voter eligible, an estimated 35 million voted in 2016, for an astonishing 85 percent turnout rate. 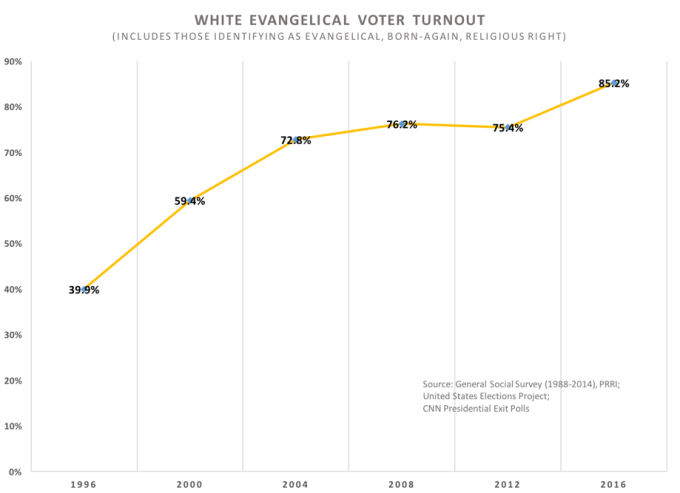 Democrats are licking their wounds, trying to understand themselves what went wrong in 2016 — and they need to. There’s a lot to digest, and they have their own major issues to address.

It’s clear Republicans hitched their wagon to a demographic they have successfully exploited at historic levels the last couple of decades. Yet in doing that they’ve still lost six of the last seven popular votes, and, as the data shows, they’ve now pretty much run out of white evangelicals to add to the mix.

And short of a massive religious revival in America that restocks the pond, Republicans run the risk Trump’s victory will conceal what they likely figured out four years ago — that 2020 and beyond look to be mathematically ugly given America’s changing demographics.

Yet, surprisingly, President Trump appears to be doubling down on this exact group that is already saturated and holding them back. At the recent National Prayer Breakfast meeting in Washington, Trump committed to “totally destroy” the 63-year-old Johnson Amendment, which bars churches from engaging in political activity or risk their tax-exempt status.

With the landmines Republicans are now navigating on a daily basis (thanks to the policies of the current administration), plus their own buzz over a temporary restoration of power, time will tell if they end up neglecting an acutely serious party inclusion issue that could have real long-term effects.