In a world defined by trends, we’ve been beset by a highly worrying one: There is an undeniable lack of IPOs.

This is a big deal. Why? Because the public market, with its aggressive scrutiny of economics, is the single-most objective judge of company formation and success. 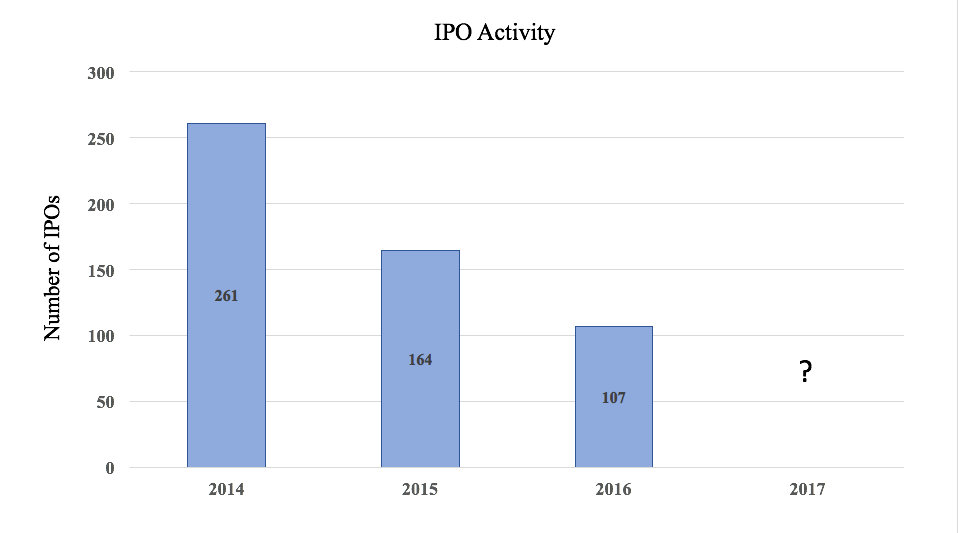 Why so few IPOs? The excuse most frequently given is that “market conditions are unfavorable.” This is hogwash. Certainly Brexit, the U.S. election, the ongoing threat of interest rate hikes and the attendant uncertainty may have spooked IPO investors for short periods of time. But the mythical “closed IPO window” almost never lasts more than three months — anyone who has taken a company public has seen the investment banker charts to prove that point.

Great companies can IPO in almost any market environment: Acacia Communications went public with a bang this May in an “impossible” market; Twilio and Nutanix soon followed, echoing Acacia’s success; Zendesk went out in 2014 among headlines that spelled the end of the “SaaS bubble;” Google had no trouble getting out in a dire 2004 market, nor did Facebook in 2012 or Square during the bleak tail end of 2015. And each of those great companies “opened” the IPO window for many companies to follow.

So logically speaking, if good companies can successfully IPO in any climate, but we’re not seeing IPOs, what’s going on? Are today’s companies simply not good enough?

One school of thought states that because giants like Amazon, Google, Facebook and a handful of other established players are expanding into adjacent markets, they are eating up all the big opportunities. These are without a doubt great companies, but I find this perspective troubling. Fifteen years ago we all thought Microsoft, Oracle and Cisco had the technology market cornered… and then today’s giants arrived on the scene. The nature of the tech industry is to innovate and give rise to new standouts. If companies are failing to IPO because they can’t out-innovate current incumbents, we may have bigger problems on our hands and the tech ecosystem will continue to grow weaker.

Another equally disturbing possibility is that companies are spending themselves into oblivion — something the public markets won’t tolerate — in their eagerness for Valley stardom. One could make the argument that companies are mistakenly operating as if growth-at-all-cost is the optimal — and available — strategy. Could entrepreneurs be so eager for tech press fame and chasing the vanity metric of the day that they’re ignoring the need to build a real business? While hubris surely plays some role, like it always has in business, it’s hard to believe hordes of entrepreneurs are mismanaging their companies into early graves by failing to live up to the standards set for public companies.

We’ve all become complacent, almost addicted to the status quo.

Instead, I believe the real issue driving the lack of IPOs is our addiction to following trends. It’s easier to start (and get VC money to back) a company in a space that’s categorized as being “hot.” In the right times, it works wonderfully. Recruiting is easier, fundraising is a snap, valuations are higher and there are more exits. Careers and industries have been made by getting a trend and the timing right. And if you’re wrong… well, so were all those other smart people who were doing the exact same thing.

We’ve all become complacent, almost addicted to the status quo. Instead of launching new, unique companies, we desperately try to follow a trend. In some cases we follow trends long after they mature, resulting in overcrowded sectors like cybersecurity, which had 336 companies funded in 2015, way up from 194 three years earlier. Mobile saw 2,578 investments in 2015, almost doubling the 1,437 deals in 2012.

In other cases, we copy startups hoping to follow a new trend, not concerning ourselves with the true depth of the “vein” we think we’re mining. The number of food-delivery startups, self-driving-car software makers, drone companies and VR purveyors is overwhelming, at the very least. Never mind that the number of IPOs in those markets, combined, is exactly zero. Let’s stop being enablers and learn from companies that have braved the markets, despite less than optimal conditions.

Acacia, Nutanix, Twilio, Zendesk — the recent big IPOs, and even the large, “trend-setting” acquisitions like Oculus, Nest and Cruise, all had one thing in common: They went alone into a space others considered too early, too late, not big enough. They followed no trends and jumped into unproven markets. In other words, they took risk.

To get back to success, to start building great companies and generating IPOs again, we — entrepreneurs, investors, executives — need to start taking risks again. We need to find new markets, ones that aren’t “proven” by the existence of a dozen other startups. It’s uncomfortable to be alone. We’ll make mistakes and pursue some bad ideas that lead to failures. But it’s the only way out of the current “too few IPOs” doldrums: We need to shift from being trend followers back to being trend setters.