It’s always good to hear that scientists are bringing the latest technology to the fight against cancer, but virtual reality doesn’t seem like an obvious addition to the arsenal. Yet it’s VR and 3D visualization that Cambridge University researchers are planning to explore under a multi-million pound grant. 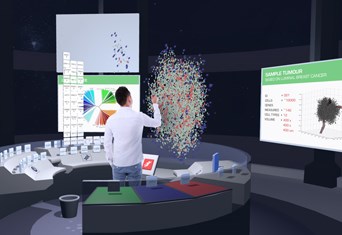 “We want to create an interactive, faithful, 3D map of tumors that can be studied in virtual reality that scientists can ‘walk into’ and look at it in great detail,” said lead researcher Greg Hannon in a Cambridge news post.

Tumors — breast cancer samples to start with — would first be sliced into extremely thin pieces, then those pieces would be imaged and analyzed, right down to each individual cell’s genetic makeup. All the slices would be reassembled in a 3D model that researchers can dive into and manipulate in virtual reality.

3D scans of tumors and other cancerous growths already exist, of course, but this would provide much greater detail and interactivity.

“I think this is the very cutting edge of how people will in the future understand not only cancer but organismal development,” said Hannon in a video from the university. “All sorts of biological problems happen in 3D, and they happen in 3D with cells communicating with each other in ways that we really don’t yet capture with any technology that we’ve developed so far.”

The team pitched the project to the Cancer Research UK’s Grand Challenge, which awards £20 million grants to cutting-edge efforts like this one. In this case, it will be awarded over a six-year period — hopefully enough time to develop some of the tech needed to bring it about.