Twitter’s advertising business is stalling, but the company is trying to focus on some flashes of improvement among the service — which it’s attributing to product changes, and not just to major events like presidential debates or the President’s usage of Twitter.

There were some questions as to whether President Donald Trump’s usage of Twitter would be something that would a big driver for Twitter’s growth — along with the heavy usage of Twitter throughout the U.S. presidential election. An event like the election is essentially Twitter’s sweet spot, and Twitter’s usage among events is something that you’d expect to be a core part of the company’s growth and business. Despite this, CFO Anthony Noto said the majority of Twitter’s usage improvements came from product changes and marketing, and that those events and people weren’t the primary drivers.

Twitter’s monthly active users count rose by 2 million, and Twitter said its daily active user growth is accelerating. Its DAUs are up 11% year-over-year. Total ad engagements grew 151% year-over-year, the company said, so there appears to be some signs that Twitter is starting to find new areas of growth. Amid all this, Twitter said it’s re-assessing its advertising products to emphasize the ones that are performing best and growing.

“I would say is that the President’s use of Twitter has broadened the awareness of how the platform can be used, and it shows the power of Twitter,” Noto said. “When he tweets, it sparks conversation and discussion. So at a macro level, discussions on a platform really helps us be the best at showing what’s happening in the world and where discussion strengthens our key differentiators and comprehensiveness fast. From a quantitative perspective, what I’d say is each quarter, we measure and analyze factors that drive causal growth in the audience, not coincident growth. In the fourth quarter, the primary driver of our growth was, as I said earlier, product changes and marketing.”

Diving deeper into that, Noto is essentially saying that it’s important to have these people on Twitter because it drives people to pay attention to the platform and use it to gather that news and conversation as it breaks on Twitter. But Twitter still has to provide a positive experience for its users and keep them on the service beyond just seeing the occasional Tweet. And Twitter has been notoriously seen as somewhat slow-moving in the product category, only recently starting to address things like abuse and harassment problems through product changes.

“As it relates to impressions growth, which is another area we look, at as I mentioned earlier, the magnitude of the impressions platform is so large, it would be very hard for an event or a single person to drive sustained growth and impressions growth,:” Noto said. “All of that said, having the world’s leaders on our platform talking about global issues, people being passionately expressing their points of view, that’s all positive or Twitter, and that’s what we’re focused on. So anytime that we can drive faster distribution of content, more comprehensive content, more discussion or more personalization, we’re better at delivering what’s happening in the world and what’s being talked about.”

While the company saw a lift in Tweet impressions, Noto said, it would be hard to assume that single major events would be the primary driver in the net increase in overall impressions. The company still touts its events — like its deals to broadcast NFL games and major political events like the inauguration — but even the sum of these products requires a good overall experience beyond just people coming to watch them on Twitter instead of somewhere else. 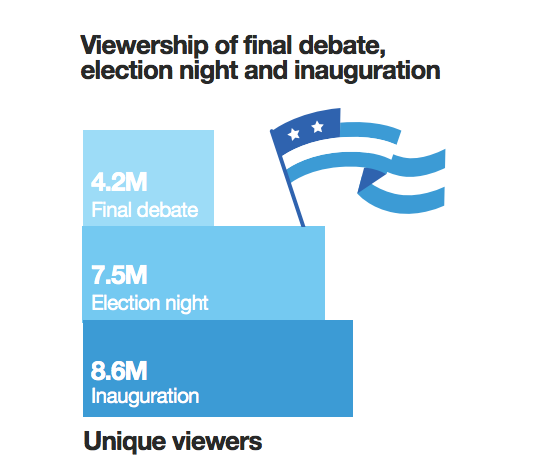 “I think I’ve talked in the past about even on nights of the presidential debates, we would have like a 10% lift in Tweet impressions,” Noto said. “And even if I assume all of that lift is incremental, it only could translate into a 0.1% lift in impressions for the entire quarter. So to get double-digit growth for an entire quarter in impressions for 3 quarters in a row takes a fundamental change, and that’s being driven by machine learning in the timeline. It’s being driven by better notifications from a relevant content and all the things that [Twitter CEO] Jack [Dorsey] talked about. The other measure that we look at, because we do have a significant amount of video on the platform and that continues to increase is user active minutes, and that also has been up double digits. So we’re really encouraged by the outputs, but the inputs are really the product changes that are driving those engagement trends.”