Box decided early on it wanted to be a platform on top of which which developers can build applications using Box services. Today, it introduced several new tools designed to make it easier for developers to get up and running on the Box platform.

Today’s announcement starts with a newly designed Box Developer Console. This is the place developers typically grab their API keys and get started. Box has streamlined the experience by adding some typical developer paths to help guide users based on their preferences. This was introduced at the company’s Boxworks customer conference last fall, but it’s being made available in an open Beta today.

The API Navigator is an entirely new tool designed to simplify using the Box APIs. Typically, a developer decides to use a platform, reads some documentation, downloads some sample code and gets familiar with the toolset. The company was looking to streamline that process, and the Navigator uses a split screen view to present documentation and code together in one interface.

Finally, there is a new set of interactive documentation, which not only provides the instructions you would expect in a documentation set, but also includes code samples in a split screen view, so developers can just copy, paste and adapt the code as needed. The documentation has also been designed to allow the community to suggest new instruction by submitting them to Box, which will review the suggestion and publish it if approved. 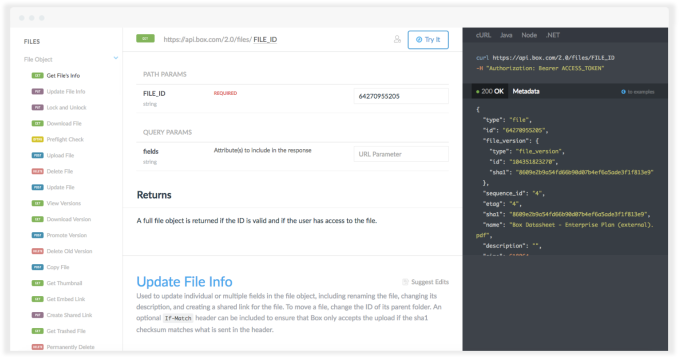 The company doesn’t just want Box being used in the conventional fashion as an application. For some time, it has also wanted to open up the services it has created for that application around storage, search, watermarking files and so forth, and let developers use those tools to build their own applications.

Jeetu Patel, Box’s chief strategy officer and SVP of Box Platform says the goal of the platform is to simplify how people think of content and collaboration. “Forty percent of applications use content in apps. If I’m going to build apps, I don’t want to build a content management stack each time,” Patel told me last fall at the Boxworks customer conference. By using Box’s developer tool set, he reasons that they can simply tap into the work Box has done and apply a consistent set of services across apps.

The idea of cloud companies like Box opening up their platform for developers has been around for a long time. Salesforce popularized the notion a decade ago when it launched Force.com, a platform that has proven so popular it has led to the creation of many successful companies including ServiceMax, Apttus and Veeva to name a few of the better known ones.

It’s actually a common idea these days. Everyone wants to be a platform, but you need to reach a certain critical mass of users before you can attract a fair number of developers. It only makes sense that developers want to go where the users are, and they aren’t going to invest the time to learn about a platform without sufficient economic motivation to do so.

Box achieved that critical mass some time ago and now claims 90,000 developers using the platform. While they might not have the traction of Salesforce when it comes to third party companies creating applications, over the last 12-18 months Box has seen customers and ISVs building independent applications using Box developer tools.

It introduced a number of these last Fall at Boxworks including LegalZoom, which uses Box’s content services to manage the flow of documents between clients and attorneys.

Patel sees adding value and simplifying the process for developers as key to succeeding as a platform. “Our goal is to compress the time it takes people to innovate,” he said. The tools announced today are a step further in that direction.