WaystoCap is an e-commerce firm taking part in the current Y Combinator program.

True in part. Yes, in the U.S., Europe, Asia and elsewhere the consumer platforms are already in place. But there remains much more to be done across the world, particularly in markets were internet access is nascent and industries are yet to adapt to digital.

WaystoCap, for example, is tackling cross-border business-to-business sales in Africa — and its founders believe it is just scratching the service.

B2B sales is the way Alibaba, China’s $250 billion e-commerce gorilla, first started so there is clearly potential with the right recipe. WaystoCap began informally helping connect sellers across Africa, by virtue of CEO Niama El Bassunie’s own meandering career path which began with PWC, before settling on a marketplace model in 2015. So far, the company has sold $3.5 million in merchandise, with sales “much stronger” over the past few months.

Africa is a vast continent and there’s near-infinite scope for “B2B sales,” so focus is important. The young company initially specialized on the food business in 10 countries. Over the past year, its categories have fanned out to reach 10 segments, from household appliances and textile and clothing to machine and industrial tools. Food remains its core strengthen, though, and that is what the sales team — based at head office in Casablanca, Morocco — is principally focused on.

The kind of products on offer won’t appeal to your average consumer, this is for wholesalers or retailers. 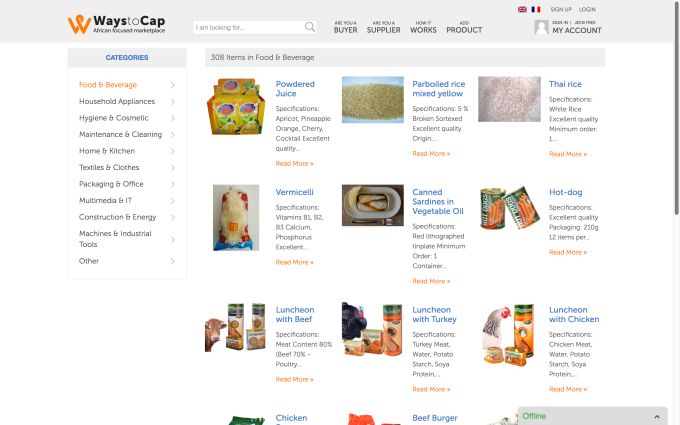 El Bassunie said the biggest hurdle is a lack of knowledge. Cross-bordering trading is estimated to be a source of income for over 40 percent of the continent’s population yet it has barely evolved.

Existing online sites are crude at best. Directories and sales boards are rarely updated, while anyone using the internet to buy product — be it domestically or overseas — is taking a huge risk on whether it actually turns up. Sellers, likewise, have no guarantee they will be paid in such circumstances. Yet, still there is vast potential to spot a deal or a particular product for import.

Aside from the fact that it keeps tabs on both buyer and seller, the startup collaborates with export insurance specialist Coface to ensure delivery while an unnamed trade finance specialist guarantees payment. The latter deal also allows buyers to enter into flexible spending plans to help manage their finances and cash reserves.

“Payment default is one of the main issues suppliers have faced,” El Bassunie said in an interview. Adding that WaystoCap wants to “rethink the whole model and disrupt the traditional importers who have access to finance, information and more.”

Going forward, WaystoCap is looking to expand its focus to more markets and more verticals. The company previously raised undisclosed seed financing, and it is looking to attract attention from investors at Y Combinator’s upcoming demo day — although it has also seen interest prior to entering the program.

“Our main plan is to get into English speaking West African countries and look into East Africa after we raise funding,” El Bassunie said. “The market is really huge — estimated at around $750 billion.”

The company currently has a team of 12 which it is looking to add to. Alongside El Bassunie, its founders includes COO Mehdi Daoui, Chief Sales Officer Anis Abdeddine, and CTO Aziz Jaouhari Tissafi.