iPhone 7 sales put Apple back on top as the world’s top smartphone vendor in the fourth quarter, according to a new report from Strategy Analytics, which attributed at least some of the growth to Apple’s ability to capitalize on Samsung’s recent missteps. The latter, of course, is referring to the Note 7 battery recall, which had led to exploding devices due to design defects.

In addition, smartphone growth as a whole recovered slightly in major developing markets, the report said, including China and Africa.

In Apple’s earnings, released this week, the company reported selling 78.3 million iPhones, higher than Wall Street’s forecasts of 76.3 million in the holiday quarter.

Strategy’s report puts this figure into further context, saying that Apple captured just under 18 percent of the smartphone market in the quarter, rising 5 percent from the 74.8 million units shipped over the same period last year.

“This was the iPhone’s best performance for over a year, as Apple capitalized on Samsung’s recent missteps. Samsung shipped 77.5 million smartphones worldwide in Q4 2016, dipping 5 percent annually from 81.3 million units in Q4 2015,” said Neil Mawston, Executive Director at Strategy Analytics, in a statement. 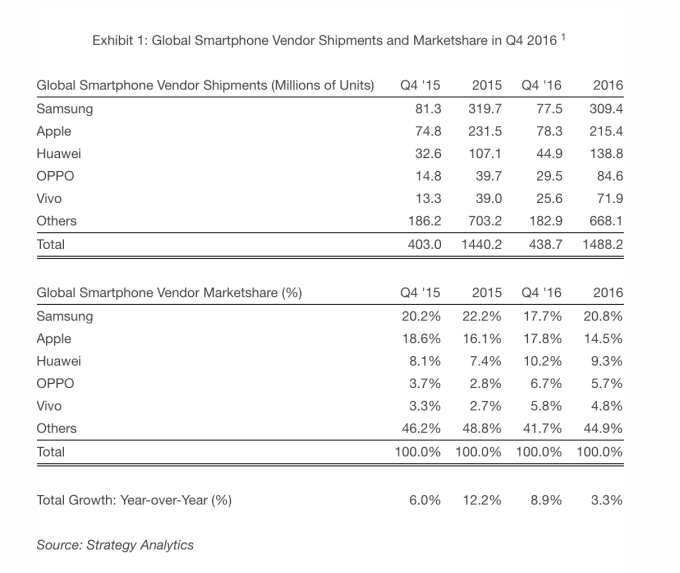 Mawston explained how Samsung lost momentum because of the Note 7 fiasco. Samsung captured 17.7 percent market share in Q4 compared with Apple’s 17.8 percent, which gave Apple the lead once again, if only slightly. Samsung’s market share, which resulted in a 21 percent share for the full year, was its lowest level since 2011, he also said. However, on an annualized basis, Samsung maintained first position with 309 million units shipped worldwide in 2016, the report notes.

For Samsung, the company is hoping for a return to growth when it releases its rumored Galaxy S8 model in a few weeks.

In addition to the Apple vs Samsung battle, the market overall saw growth of its own in Q4. Global shipments grew 3 percent year-over-year from 1.44 billion in 2015 to a record 1.49 billion in 2016.

Huawei earned the third position in the quarter, with 10 percent market share – the first time that the company had reached the double digits. The brand has struggled against rivals at home in China, but saw improved performance in Western Europe.

Meanwhile, OPPO came in in the fourth spot, with a 7 percent share of the global smartphone market after nearly doubling from 4 percent a year ago. Its growth is being attributed to popularity in China, and now it’s preparing to expand into other emerging markets, like India and Nigeria.

India, it’s worth noting, is becoming the new battleground for these smartphone vendors. With increasing competition from local players, Apple has more recently turned its sights on India, where sales are booming thanks to a growing population, where half are under the age of 25, and a growing middle class.

As Apple CEO Tim Cook noted on the earnings call this week, the strong U.S. dollar had hurt revenues in both China and India, but Apple was still bullish on India in particular.

“Despite the demonetization move in India that created lots of economic pressure there last quarter, despite that we had all-time record revenue results,” Cook said. “So we were very happy about that. I feel really good about how we’re doing [in India]. It’s a great place to be.”

Apple didn’t break out its figures for India, but Cook did say Apple recorded “record revenue” in the market, and noted the company planned to invest in the region, including retail stores.