Starbucks is embracing the trend towards voice-based computing with the launch of a new feature in its mobile app called My Starbucks barista, which allows customers to order and pay for their food and drinks just by speaking. This includes being able to modify their drink order, as if they were speaking with a barista in real life. Additionally, the company is launching a skill for the Amazon Alexa platform, which lets customers re-order their favorite items by speaking to their Echo speaker or other Alexa-powered device.

The company had previously announced its plans to launch a voice assistant at its Investor Day, saying then that it would arrive to beta testers sometime in the early part of 2017.

The feature utilizes artificial intelligence to process the incoming orders through a new messaging interface in the Starbucks app. Here, customers can also interact with the virtual assistant by messaging their order, chatbot-style. The assistant can confirm which location you want to order from, and help to process the payment, as well. 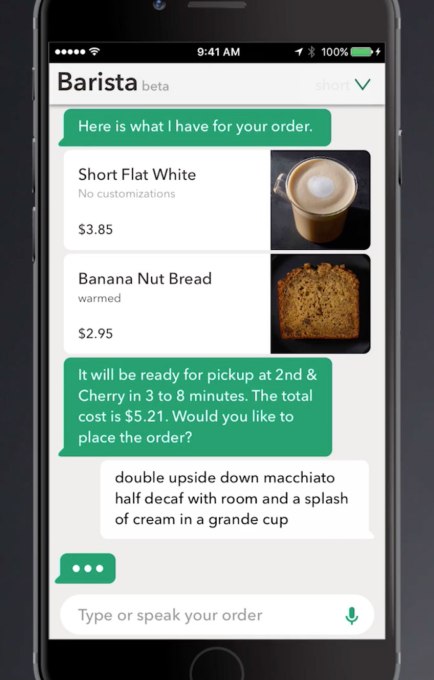 Starbucks says that the new assistant will initially only be available to one thousand customers nationwide on iOS during a limited beta test, with a phased rollout planned through summer 2017. The Android version will then follow later in the year.

Related to Starbucks’ adoption of voice computing, the company also introduced the “Starbucks Reorder Skill” for Amazon Alexa. This lets customer re-order their usual items by saying “Alexa, order my Starbucks.” This will require customers to have the Starbucks mobile app installed on their device, and an account set up where they’ve designated their favorite order. 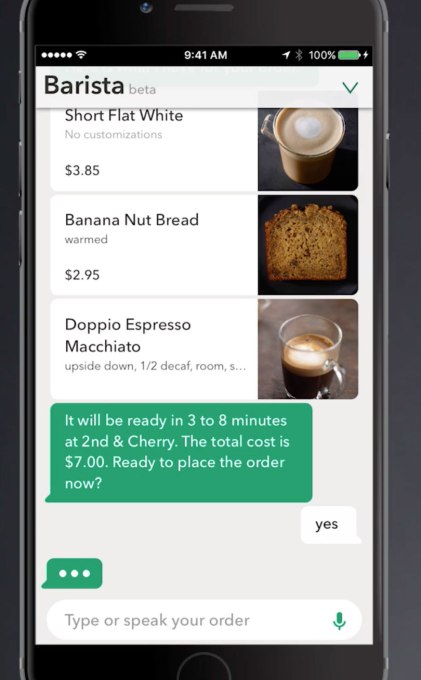 The launches come at a time when voice computing is on the rise. A recent forecast estimated that 24.5 million voice-first devices would ship in 2017, with platforms like Amazon’s Alexa and Google Home leading the way. Customers are also getting more comfortable speaking to assistants on their mobile devices, like Siri, Cortana, and Google Assistant, as a means of accessing information or performing tasks.

It makes sense then, that Starbucks would join this trend with efforts of its own. Its app has already led the market in terms of advancing technologies like mobile payments and order-ahead, so being among the first in its space to debut a voice assistant is the next logical step.

At its investor day, the company noted it has 8 million mobile paying customers, with 1 out of 3 using Mobile Order & Pay. The company also said today it has 13 million Starbucks Rewards members in the U.S. and its Mobile Order & Pay now accounts for more than 7 percent of transactions in U.S. company-owned stores.

“The Starbucks experience is built on the personal connection between our barista and customer, so everything we do in our digital ecosystem must reflect that sensibility,” said Gerri Martin-Flickinger, chief technology officer for Starbucks, in a statement. “Our team is focused on making sure that Starbucks voice ordering within our app is truly personal and equally important was finding the right partner in Amazon to test and learn from this new capability.”