Most reported declines in Snapchat Stories view counts ranging from 15 to 40 percent, and a reduction in how often they or those they monitor post to Snapchat Stories. Meanwhile, our sources report rapidly growing view counts on Instagram Stories, and engagement-to-follower rates one social influencer talent agent called “Insanely f*cking high”.

The success of Instagram Stories, the decline in Snapchat usage we’ve heard from a wide array of sources, and Facebook’s relentless drive to compete with the startup could spell trouble for Snapchat’s IPO on the NYSE market that’s expected in March. Snap Inc declined to comment for this story.

“Everyone is posting way less. Some are not posting at all anymore” on Snapchat, says the CEO of a social content production studio about the dozen social media stars they represent.

Several sources refused to be named in print for fear of retaliation from Snapchat or because they weren’t authorized to disclose client data. But across the social content production firm’s stars, the CEO says there’s been an average decline in Snapchat Stories views of 20 to 30 percent from August until mid-January.

In the 25 weeks since launch, Instagram Stories has reached 150 million daily users. That’s the same number of users that Snapchat’s whole app reportedly hit around June 2016, after seeing swift growth from 110 million daily users in December 2015, Bloomberg reported. Snapchat hasn’t announced a higher number since, nor has one leaked, despite it trying to impress potential investors during its current pre-IPO roadshow.

Snapchat is expected to publicly file to IPO this week, and that might include some larger stats. But the consensus from our sources is that they’d be higher if not for Instagram Stories, and Snapchat’s long-term growth, especially internationally, will be hindered by the competition. 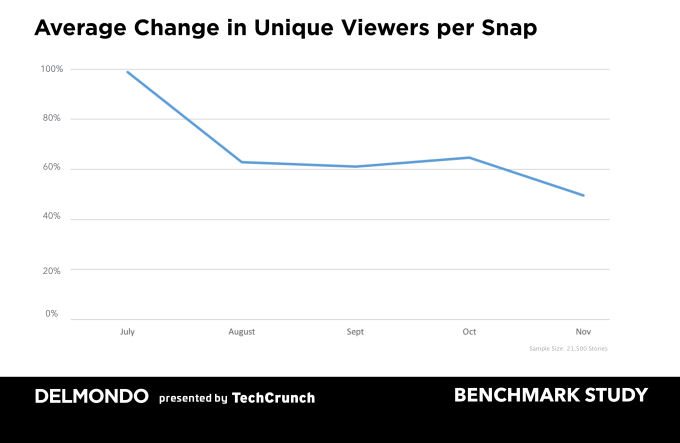 As for downloads, App Annie shows Snapchat saw a big drop right when Instagram Stories launched at the beginning of August. It fell to its lowest ranking all year, #11, after hovering in the top 3 for the first half of 2016. It’s unclear why it bounced back at the end of October, but it’s begun to slip again. [Update: Instagram experienced a dip in August download ranks too, which we’re investigating.] 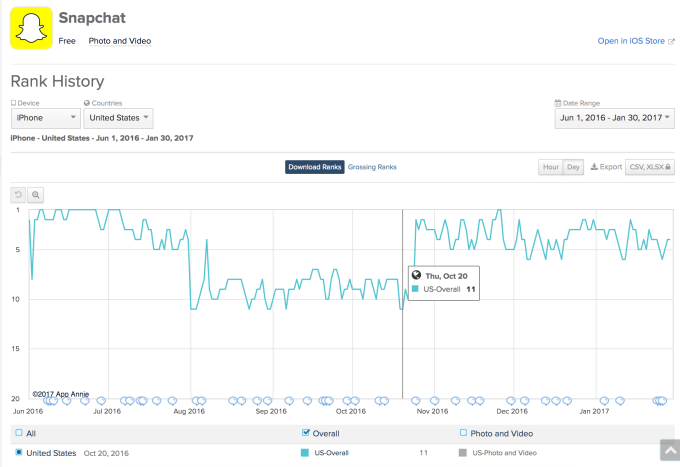 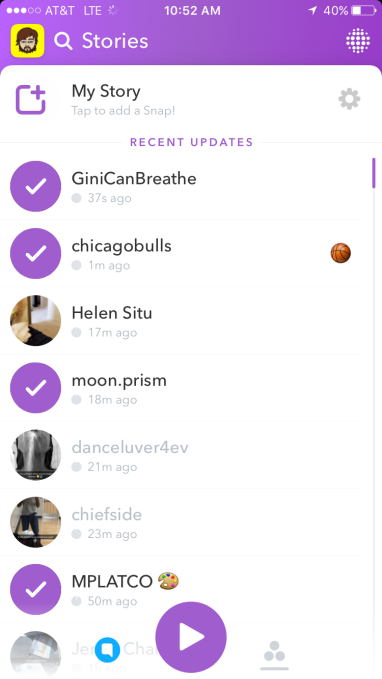 Without Auto-Advance, you have to manually select Snapchat Stories to watch in a Story Playlist

One thing that’s important to know as we review these reports is that Snapchat removed its Auto-Advance feature on October 7th, so users could no longer instantly watch every Story in their list in a row. Instead they had to manually select Stories to load as an ad hoc Story Playlist (pictured here), though there’s a little-known way to select all Stories with by tapping the triangular dot button.

This change should have directly caused some drop in views since Snapchat users aren’t being shown Stories they’re less interested in, which they might have fast-forwarded through while still triggering view counts. Snapchat marketing and analytics company Mish Guru’s CEO Thomas Harding says that in October when Snapchat removed Auto-Advance, a selection of its client accounts that have been posting consistently saw an immediate 9.64% drop in views.

You could argue that the remaining views are more intentional and therefore more valuable. But the change also made it less convenient to lean back and watch a day’s worth of Snapchat the way you used to on Snapchat and can on Instagram thanks to its Auto-Advance feature. And several sources think that’s leading some users to open Snapchat less overall.

Social talent agent Charlie Buffin who represents some former Vine stars says one of his top creators was averaging 330,000 views per day on Snapchat in late 2015 until June 2016. But by December, they were receiving 205,000 to 250,000 views per day.

“It is clear to us that regular users’ Snapchat usage/engagement have gone down significantly since the release of Instagram Stories” writes Buffin. He also noted that “Snapchat removing the Auto-Advance feature has affected the natural ‘binge-watching experience’ for consumers, which is really cutting into views for creators.” But Snap Inc doesn’t seem to care. “Snapchat has always remained distant from its creator community, which is not a strong move for the company” Buffin concluded. 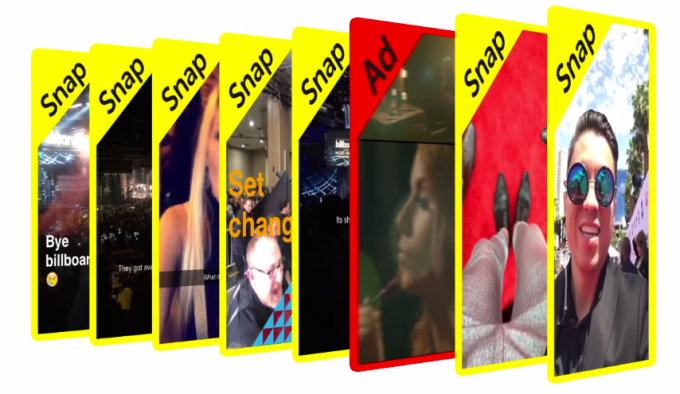 Snapchat shows ads between people in your Stories Playlist, so its revenue for this ad product depends on large numbers of viewers

One star, Hannah Stocking, saw her Snapchat Stories views fall from 150,000 on August 16th to 90,000 on January 17th. That’s despite massive growth on other platforms like YouTube, and Instagram where she rose from 1.2 million to 4.3 million followers in the same time frame. “Her Instagram Story numbers are growing faster than anything right now” says John Shahidi, founder Shots Studios, the Justin Bieber-backed selfie app and video creation startup that represents Stocking.

Media marketing and business development agency Fighter Interactive’s CEO Kwasi Asare tells me “Snapchat opens have gone down a minimum of 15 percent for some big social media stars.” He sees the removal of Auto-Advance as mistake, saying “Snapchat messed up by letting people choose whose stories they view individually. Instagram has more of a flow where it allows you to watch the stories of everyone you’re following.

Asare also believes Instagram’s clone has quickly risen to equal status with teens, noting that “Most kids are starting to post on Instagram or Snapchat, and then post on the one they didn’t post on first.”

Social talent media company Galore’s CEO Mike Albanese says “Influencers that were late to build an audience on Snapchat pretty much abandoned the platform because it was so much easier for them to reach more people through their existing audience on Instagram Stories.” 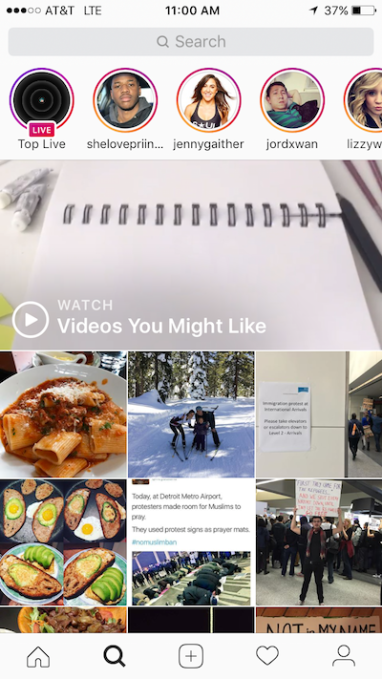 That said, he was the only source we asked who said that they’d seen growth in Snapchat views, though that was for “top Snapchat influencers” like models Val Mercado and Sahara Ray, and actress Ava Allen who he says pour a ton of effort into Snapchat and heavily promote their account through their other social presences. But he believes “there are less Snapchat Stories being published on a daily basis overall versus August of last year.”

A leading social media talent company’s co-founder tells me that amongst the stars they work with, “Almost all of them are down about 20 to 25 percent on Snapchat” since August.” One of their creators was seeing 75,000 opens per Story in August, and only 50,000 now. Another went from 50,000 to 30,000. Meanwhile, the stars are seeing 6 to 10 percent of their Instagram followers opening their Instagram Stories each day, which the co-founder called “really f*cking high”.

“Marketers are dedicating more resources to Instagram because you can’t grow on Snapchat. Now there’s a lot of campaigns we don’t even need to do on Snapchat.”, they say. “The only way to grow is from [cross-promoting on] YouTube or Instagram. Snapchat is making some of the same mistakes as Vine. They aren’t embracing creators. They want to be private messaging.” In contrast, Instagram promotes social media stars and helps them grow their Stories views by featuring them on its Explore tab that Snapchat lacks.

Then they gave perhaps the most damning quote we heard. “Everyone has forgotten that Instagram Stories is a Snapchat clone.”

These industry reports build on a mountain of anecdotal evidence about Instagram stealing Snapchat users that I’ve heard online and from my network, and seen in my own usage and view counts.

It seems Facebook has finally found way to challenge Snapchat after multiple failed attempts since it turned down the social giant’s first acquisition offer in 2012. Poke, Slingshot, Bolt, and Flash all flopped as standalone apps, while baking Snapchat’s best features deep inside Facebook seemed to have little effect.

But by putting a Snapchat clone front and center atop Instagram’s feed, the Facebook family of apps discovered a way to make its version more convenient to use than the original. And emboldened by Instagram’s success, now Facebook is testing similarly designed Snapchat clones in its main app as Facebook Stories, and its chat apps as Messenger Day and WhatsApp Status. 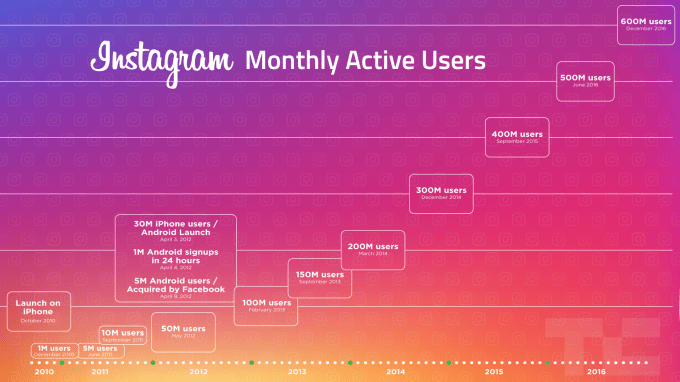 Snapchat lovers are exporting and syndicating their Stories to Instagram for extra reach. Those who’d only recently gotten into posting Snapchat Stories are finding it easier to watch and share on Instagram where they already spend time and have built a social graph. And people who’d never tried Snapchat but were intrigued by Stories are finding Instagram is good enough that there’s no need to sign-up for Snapchat.

It’s that last one that might be most threatening to Snap Inc’s IPO. We’re already seeing how Instagram is eating up Snapchat usage, reducing the Stories views it depends on to drive ad revenue. Yet what matters to Wall Street is growth potential. Ad-driven social networks need massive scale, which usually comes from international domination.

That can’t happen if Instagram, Facebook, Messenger, and WhatsApp deliver the Stories feature to foreign countries where Snapchat hasn’t gained traction already. Around 80 percent of Instagram’s 600 million monthly users are international. And if Instagram Stories continues on this trajectory, it could prove bigger than the app it copied.

As I wrote a week after the launch, Instagram Stories castrated Snapchat, even if it can’t kill it. Snapchat will continue to have a lively user base, though Instagram may inhibit its continued expansion. 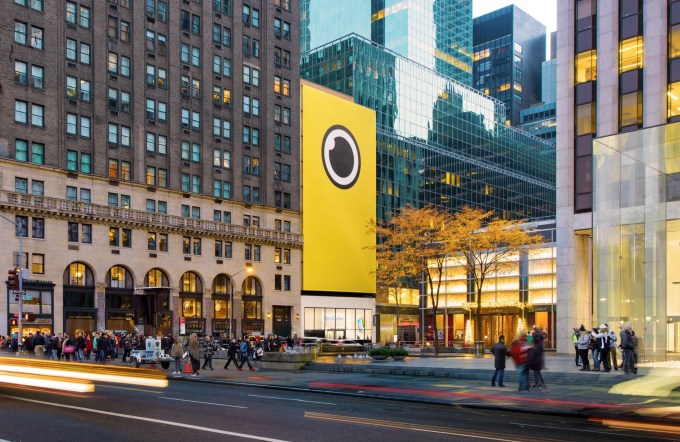 Reports from social media celebrity managers and analytics companies that work with big accounts may present a more dire outlook than what’s going on with average teens on Snapchat. Kids under 25 in the US who are completely immersed in Snapchat might not stray. But Instagram may be convincing the 25 to 35-year olds who came of age on its app to stick around, while it’s swooping on international teens before Snapchat gets popular in their market. Plus, vanity dictates that people will share where they get the most views, and many people have spent years longer building their Instagram audience.

Going Public With A Different Story

With its future in broadcast social media under fire, Snap Inc may need to tell a different story for its IPO. At the least, it might have to concentrate on touting its average revenue per user rather than its scale.

It has spent the past quarter repositioning itself as “a camera company” that makes hardware like its Spectacles camera-sunglasses. It’s also tried to double-down on the app’s first feature, disappearing private messaging, by adding a groups feature and improved navigation. But scrounging together hardware profits and monetizing chat directly can be quite challenging.

In six months, the game has changed for Snapchat, and not in its favor. Once the undisputed king of cool amongst Western teenagers with the potential to disrupt the world’s biggest social network, it’s now in danger of becoming just one of several popular apps for ephemeral storytelling.