Figuring out where to eat is often a headache. While there are a plethora of restaurant-discovery apps and sites already out there, one app, available today, aims to make the process a lot easier. Tell, available now for iOS, is yet another food-finding app — but two things set it apart from the rest.

First, it trades in reviews for simple recommendations, because, at the end of the day, people just want to know if they should go to a restaurant or not. Second, Tell eschews recommendations from random reviewers you’d find on Yelp or Foursquare and instead shows a curated list of recommendations from food influencers, blogs and celebrity chefs — people you follow and trust.

Specifically, the app allows you to select a group of trustworthy advisors from a list of influencers that have partnered with the app. These include publications like Infatuation, Eater, Michelin Star, Lonely Planet, Time Out, Grub Street and Zagat, and bloggers such as the Brunch Boys and No Leftovers.

Tell has also partnered with celebrity chefs and restauranteurs, such as Scott Conant, as well as non-food celebrities such as Entourage creator Doug Ellin, who is an investor in the app. 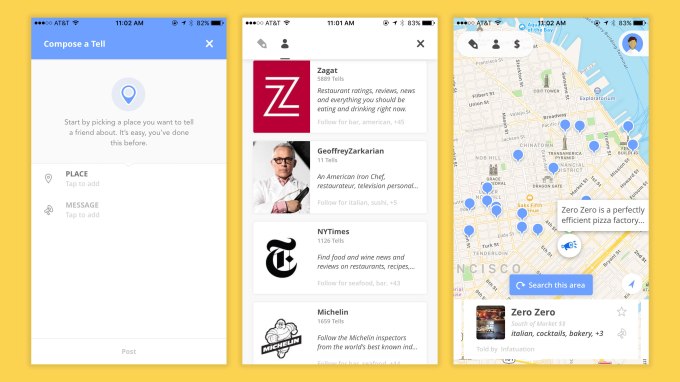 You can pick as many or as few of these influencers as you want, and then see a map of the city in which you are looking for a restaurant. All of the spots recommended by the people on your list will be mapped out.

Besides being able to discover recommendations from your curated network, the app has other cool features, such as a way to save any restaurants you’ve been meaning to check out or go back to, and a way to filter results through type of food or occasion.

The app also taps into your social network, allowing you to share recommendations with your friends and contacts that are Tell users.

So far, the creators have focused on New York City as the launch city for the app when it comes to partnerships, but the platform can be accessed anywhere and will still provide some recommendations in many major cities. Tell will expand throughout the U.S. this year, followed by an international rollout.

One thing everyone can agree on is finding a restaurant should be a simple task — and what better way to find one than from a trusted source that has already tried it.