Hmm. Twitter users searching for the word “asshole” will receive a recommendation for the profile of our 45th president of the United States, Mr. Donald J. Trump.

Why is this happening? We reached out to Twitter for comment and will update if we hear back. [Update 1/26: Although Twitter hasn’t responded to us, it appears they have removed Trump from the search results for “asshole” and other keywords mentioned in this story.] Our best guess is that Trump’s mentions are full of people calling him an asshole, and so this has convinced Twitter’s search algorithm that the word is associated with his account.

The strange search result was noticed by Greg Jenner, a historian who co-hosts Inside Versailles and a consultant on the comedic history show Horrible Histories.

Haha, type "asshole" into Twitter's search bar. Do it.

Here’s what happens on mobile: 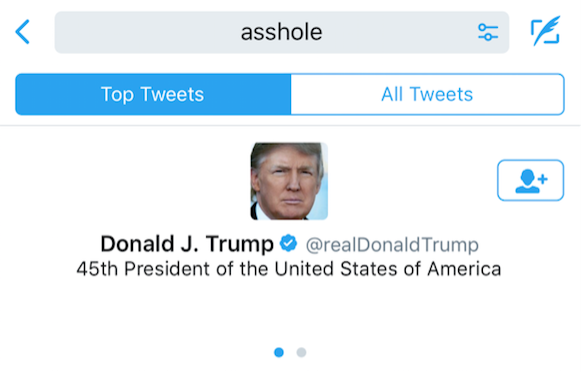 And here’s the view on desktop: 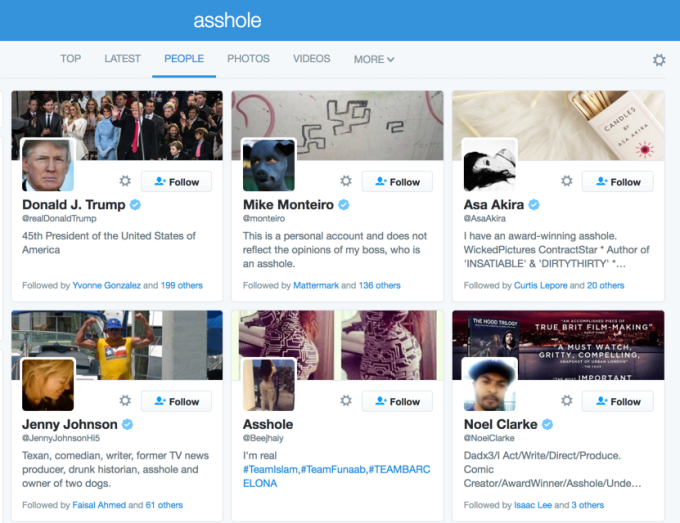 Oh look, it happens when you search the word “racist” too:

And even “tiny hands”!

But Trump isn’t the only politician whose profile is the top recommendation for a word with a negative connotation:

To fellow journalists tweeting about this Twitter search thing, it does cut both ways: pic.twitter.com/mzMB5wnGGt

If this is indeed the product of what people are saying in tweets that @-mention the president, it will be interesting to see what Twitter will do about it. Trump is probably showing up in these results due to algorithmic mishap, and Twitter has apparently chosen to manually remove his profile from the results. After all, Trump is a big fan of the social media platform. It seems that Twitter isn’t choosing to stand by its search algorithm and allow the president’s account to show up in search results for words that users frequently associate with him.