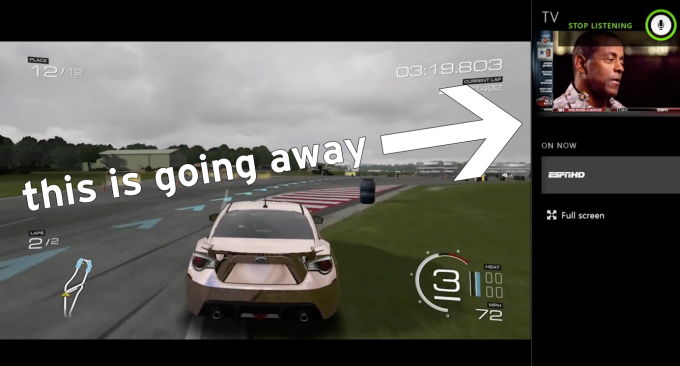 I always really, really liked the idea of “Snap Mode” on Xbox One. It’d let you run a game on 75% of the screen, all while running another app on a vertical sliver of the screen. Playing Titanfall and watching Always Sunny? Yes please.

Alas, the feature’s real world execution kinda sucked. It was slow and kludgy to the point that third party apps like Netflix ditched it outright months after launch, leaving people who’d gotten used to it (like me!) wondering what the heck happened.

Now Microsoft is nixing Snap Mode outright — but will it get a replacement?

Word of the change comes from Microsoft’s Mike Ybarra, who tweeted that Snap mode would be going away as part of their efforts to speed up the Xbox One interface:

Note, however, that he says “replaced”, not “removed”. That’s leading people to think that Microsoft probably has an alternative in the works — and hopefully one that actually, you know, works. (Dear Microsoft: Just give us picture-in-picture mode for video. No one wants the other stuff.)