Anshu Sharma Contributor
Anshu Sharma is a serial entrepreneur and a former venture partner at Storm Ventures.
More posts by this contributor

Davos leaders are gathering this week to change the world. Again.

“We are faced by a world which is increasingly schizophrenic. Our world is rapidly changing and power is shifting geopolitically, in business terms and even in the virtual world. Power, wealth and well-being are spread in ever more complex ways, leading to a world which is harder and harder to understand and which often seems alien to us. It is to make sense of this world, and to tackle its complex problems and opportunities, that leaders from all walks of life will once again meet in Davos at our Annual Meeting. The World Economic Forum Annual Meeting gives all of us a chance to understand and shape the Global Agenda in the year ahead.”

Sounds pretty good to me. Except this is a quote by the Chairman on the focus of Davos 2007. In 10 years, nothing seems to have changed at Davos.

Meanwhile inventors and doers who were likely not at Davos in 2007 have changed the world in ways never imagined by the billionaires and technocrats who appear to run the world as we know it.

Wrapped in the rhetoric of changing the world and solving inequality, what you have is a collection of successful and (mostly very) rich people who are there to get to know each other and make deals.

Nothing wrong with that.

But let’s stop pretending that the solution to any of our world’s problem is going to emanate from Davos.

The next iPhone, Tesla, CRISPR, solar panel, Uber, self driving car is being invented in a lab or a garage somewhere while dealmakers of today gather in an artificially constrained city in the middle of Europe purely because of history. The rational thing would be to throw the same party in Bali or Durban. But the rational thing is inconvenient for the crowd that is used to things staying the way they always have been while preaching radical change to others.

Reinventing the World Without Davos

Unlike the other critics, I am an optimist. The world is getting better when you look at it through the arc of history. Billions of people have been lifted out of poverty and while we keep fearing the rising inequality in this world, the ability of the poor to get access to technology has never been better. This seems hard to believe because our experience suggests that the world is ever more divided between billionaires and the average person.

Are We All Billionaires?

Illumina just announced that we will be able to read the full human genome for $100 — something that would have taken $2.7B a decade ago will soon be available for $100 to you and me.

We all know that our iPhones have more computing power and memory than the computers for Apollo 13. 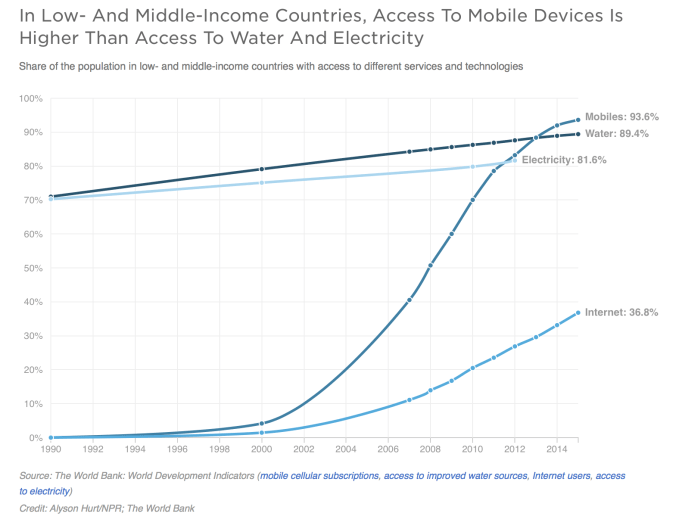 The median income earner in America today has access to technology that would cost millions of dollars just a few decades ago. Rather than argue about the perceived inequality between the billionaires and millionaires, we need to get the next billion global citizens into the fold of the global middle class.

The Future of Davos

Davos continues to be a hub for the movers and shakers but it is an opaque event whose presentations and content are nowhere close to the energy of a TED event. Or even a vibrant open discussion on Twitter on a good day.

Perhaps the fundamental fallacy of Davos is that its a geographically constrained closed network of a select few when we live in a world where presidents of nations, and CEOs of companies like AirBnB, are interacting with a much larger open network of humanity through social media.

Perhaps, Davos needs to morph into a different beast — warmer, more open, and accessible to everyone especially those that are truly changing the world.