In December, Hulu announced the debut of user profiles in order to make its streaming TV service more personalized to end users, offering each user their own Watchlist, viewing history and recommendations based on their activity and interests. At the time of launch, the feature wasn’t broadly available, however. That’s now changing, as Hulu has just rolled out user profiles to mobile users.

According to the most recent update to Hulu’s iOS application, user profiles are now available to all. This also includes support for kid profiles, the company says.

That means parents can set up a special profile for each child in the household, which locks down their ability to access or view mature TV shows or movies, or be shown adult content in the recommendations. This will go a long way toward Hulu’s ability to compete with rival streaming services, like Amazon and Netflix — the latter of which has offered user profiles for years. 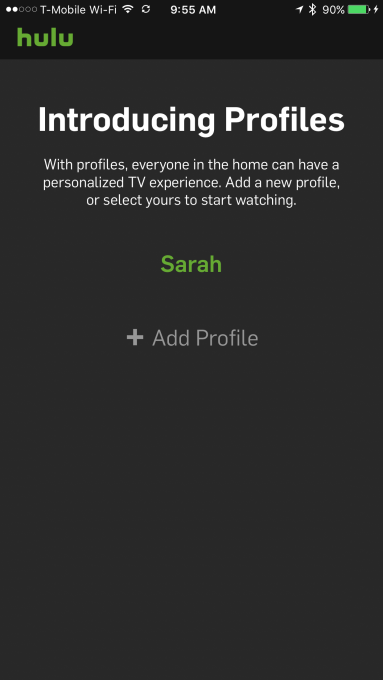 Though seemingly a minor update, profiles are actually a competitive advantage in today’s streaming era, where user experience and personalization are two of the main areas where services now compete. After all, a service’s catalog may be large, but if it fails to put the right shows and movies in front of the user who would want to watch them, then the customer may turn to another service instead in order to find something to watch.

In addition, profiles make a service more appropriate for families, where parents don’t want kids seeing some of the more violent, frightening or inappropriate content that’s available on its service.

And while Hulu previously offered a “kids” area, you would have to first launch the main Hulu interface, then navigate to the kids section — during which time kids could be exposed to mature content, or even tap to watch the adult shows. Meanwhile, Hulu’s parental controls have not been very robust. 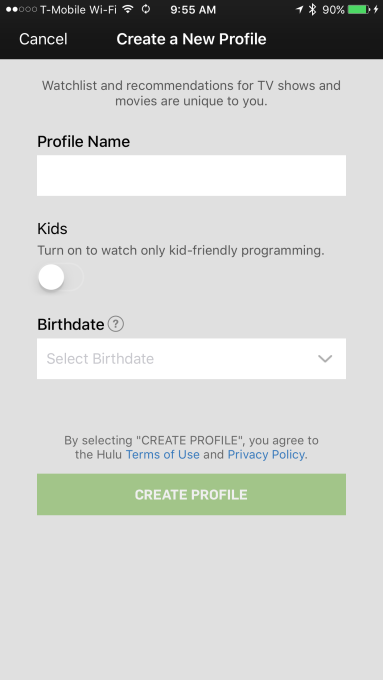 For Hulu, which is preparing to launch its own live TV streaming service in the days ahead, user profiles will also serve to tie its video-on-demand catalog to its live TV streams.

The company recently purchased a database of video metadata, The Video Genome Project, to help it improve its recommendations ahead of its expansion to live TV. The company explained that it could use the technology to ingest news feeds of current events, then connect their theme (e.g. “political upheaval”) to its on-demand library of shows and movies.

If it actually rolls out such a feature, that could make Hulu’s service a compelling alternative to existing live TV services, including Sling TV, PlayStation Vue and the newly launched but troubled DirecTV Now.

Hulu user profiles were initially available on the web, ahead of their mobile debut. The Google Play application does not indicate they’ve arrived yet on Android, but those are quietly rolling out now, we understand. Profiles should be live on Android by the end of the week.

Web users should all now have access to profiles, as well, and viewers on Xbox 360, Xbox One, PS3 and PS4 should also see profiles. Other devices will come soon.