Amazon’s ComiXology is delivering on the promise it made last year to create original content exclusively for users of its platform and Kindle customers, with Adventure Time Marshall Lee Spectacular, an Adventure Time tale focusing on the Vampire King from the franchise’s alternate gender-swapped story universe.

The Marshall Lee story is available as a $3.99 one-time purchase, and during its debut is free to ComiXology Unlimited users, who can subscribe to receive a library of back-issues for unlimited reading in exchange for a monthly fee of $5.99, with a 30-day free trial. It includes four stories penned by a variety of creative teams, including one penned by Mariko Tamaki and illustrated by Audrey Mok, so you can expect very good things from this ComiXology original debut issue. 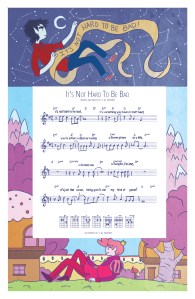 The comic is still published by BOOM! Studios in partnership with Cartoon Network and leverages their existing IP and license arrangement, but will be available only via Amazon platforms. The push to create more exclusives for the platform is reminiscent of what Netflix and Amazon have done with their video platforms, using both original owned IP and popular franchises (Marvel superheroes, for instance) to create a content moat to attract and retain subscribers.

ComiXology’s release slate includes the upcoming series Valiant High from Late Show with Stephen Colbert’s Daniel Kibblesmith writing, as well as a re-creation of graphic novel pioneering work Marley’s Ghost, both of which will be released at a later date.