ProtectWise, a security startup that records all your network traffic DVR-style, and saves it in the cloud, announced a $25 million round today.

The company’s security strategy is surprisingly simple. It records all of the networking activity, then indexes the data and provides customers with forensic tools to search and review it. Once a breach has been detected, the victimized company can rewind “the tape” and see when and how the hacker entered the network. It’s essentially like having a video camera on your warehouse and buildings, but it’s watching the network.

“The solution is enabled by light-weight software sensors that act like cameras on the network and record [all of the activity] on the network,” CEO and co-founder Scott Chasin explained.

While this isn’t a new approach to cyber-security, Chasin says what differentiates his company, is that it’s in the cloud. “We know that breach detection [takes] 200+ days. This kind of visibility has been a luxury. Network recording appliances have required big storage arrays and have given you a myopic recording window. Using cloud resources, we are able to exploit a much longer retention window,” he said.

That means you could potentially track hacking activity months after the hacker entered your network. If that seems like it could be an awful lot of information, he says algorithms help optimize what gets saved and allows the company to use commodity bandwidth to store what are likely massive amounts of data, even from a modest-sized company. 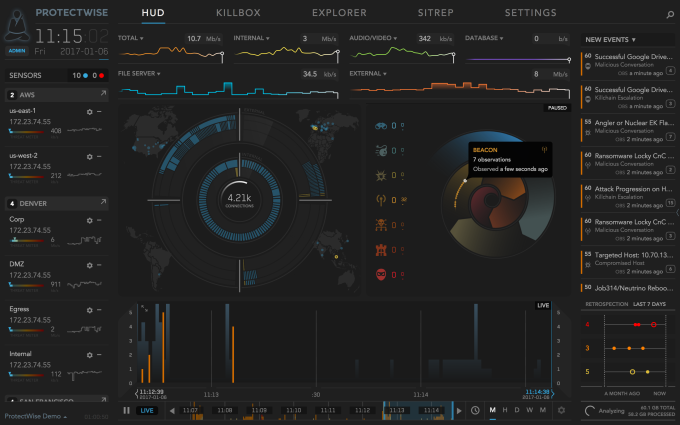 The idea is to break that data down and make it more accessible. “We have built a lot of key intellectual property around how search works. The key to boiling the ocean is not to boil the ocean. We have built intelligent capabilities around how we index and store data,” Chasin said.

The product is designed to help find, then visualize data in the record in a pretty cool visual style. “We have solved the problem of pervasive visibility and have built automation that sits on top of that, with a rich presentation layer for forensically exploring.” That ability to visualize the data leads to much more efficient incident response and more analysis and searching capability with the data set, he added.

While he wasn’t willing to talk about customers or exact growth numbers, he did indicate they were doubling their number of customers quarter over quarter.

The company, which launched in 2013, currently has 70 employees, and is based in Denver, Colorado.