According to a new year-end report from Sensor Tower detailing the top apps of 2016, streaming services dominated when it came to which apps, outside of games, pulled in the most revenue over the past year. At the top of the list is Spotify, which not only scored the number one spot on the iTunes App Store, but also was the number one revenue earner across both platforms, including both the App Store and Google Play.

Meanwhile, thanks to chat app LINE’s traction on Android, it ranked as the number two app by revenue overall, followed by Netflix, Tinder, Pandora, then HBO NOW.

Hulu also made an appearance on the list, as the No. 9 app by revenue overall, and No. 7 on the App Store. 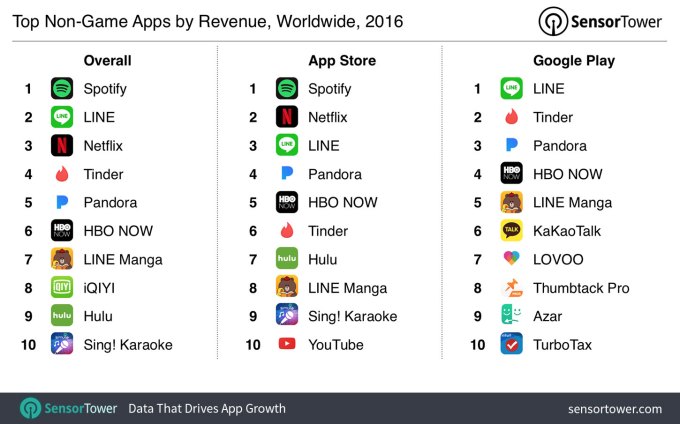 The list indicates that the trend toward cord cutting – shifting attention away from linear television to streaming services – is still going strong, as is the growth of subscription-based streaming of music.

That being said, ranking high on the App Store’s revenue charts is one thing, but translating that into a profitable business is still a challenge.

Case in point: earlier this week, Pandora announced it was laying off around 7 percent of its U.S. workforce, despite having grown its business to include over 4.3 million paid subscribers. But the older music streaming service is today facing new competition from the likes of Apple Music and Spotify.

And in the video streaming market, the newer over-the-top service HBO NOW is also still working to become profitable. With just over one million subscribers as of March, HBO NOW may have earned its No. 6 spot as one of the biggest apps by revenue, but the $15/month price point is still keeping many customers, including millennials, away.

To make the service more appealing, HBO said in December it would increase its original programming by 50 percent to 600 hours annually, and it has cut the cost of the service to just $5 on the newest TV streaming service, DirecTV Now.

Elsewhere on the top revenue charts, is the standout hit LINE Manga, LINE’s comic reader and storefront which launched in 2015. The app made an appearance on all three charts – No. 5 on Google Play, No. 8 on the App Store, and No. 7 Overall. 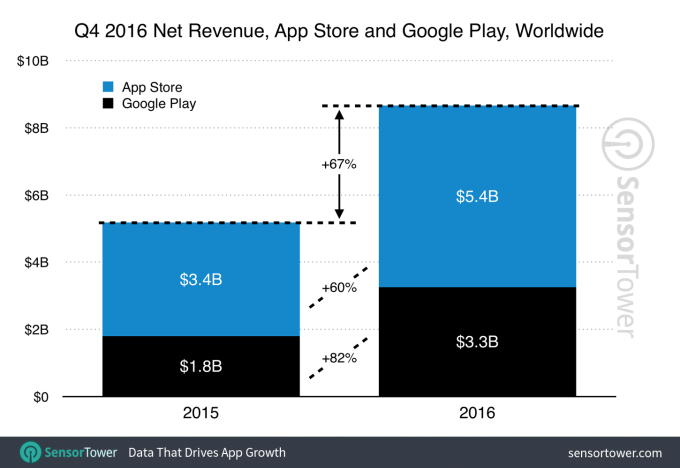 The fourth quarter is historically a big revenue driver, thanks to holiday sales of new devices. This remained true in 2016, where worldwide net revenue from both apps and games across both platforms reached $8.7 billion. That’s up 67 percent from the $5.2 billion seen in Q4 2015.

The report also examined the top non-game apps by downloads, which led to fewer surprises.

The most notable entry here is Uber, which came in at No. 9 overall and No. 7 on the App Store, following a year of expansions both in the U.S. and in more locations around the globe. 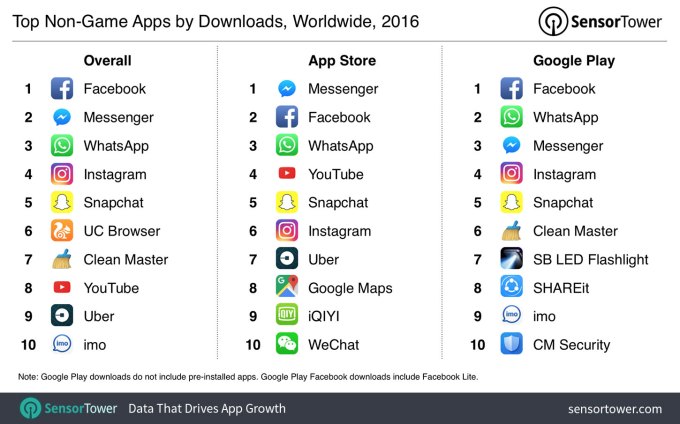 Throughout the year, said the report, there were more than 80 billion new app downloads in total.

The lists were compiled were compiled by app store intelligence firm Sensor Tower. Its findings may ultimately differ from rivals, like App Annie, because of the way these firms generate their data. However, it will be a useful point of comparison going forward, as more year-end lists continue to emerge in the weeks ahead.