Razer, the billion-dollar startup that builds hardware and software for hardcore gaming enthusiasts, is today unveiling two of its latest products aimed at ramping up the immersive gaming experience. And — surprisingly, given how much else we’ve seen in this area this week already at CES — Razer is not launching yet another virtual reality tool.

Project Ariana is a new in-room projector that expands your gameplay with a flood of lights, colors and high-definition sound. And Project Valerie is Razer’s latest laptop that gives a new meaning to the concept of widescreen: its display fans out triptych-style to give a portable computer owner use of three screens instead of just one.

Razer is also opening up its Chroma 16.8 million-color palette — the colorful flashes that Razer builds into its computers and peripherals that respond to gameplay — so that it can be used by third parties. Early adopters, Razer said, include Lenovo, NZXT, Antec, Lian Li, Wicked Lasers and Nanoleaf.

The two hardware products are being unveiled today at CES in Las Vegas, but the Valerie laptop will not ship until later this year and is still missing details for several of its specs (including battery life).

Meanwhile, Ariana is being termed a “concept design” that doesn’t have a rough delivery date. In fact, even the display of it here at CES has been down to the wire, and we weren’t able to get our own video and photos ahead of the news coming out. We will be doing that and talking to Razer’s founder and CEO, Min-Liang Tan, after the show opens Thursday and updating then. 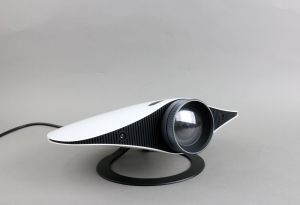 For now, one of the most notable aspects of Ariana (a model of the projector shown here) is that it shows how Razer is expanding some of the concepts that have been hallmarks for the company, and also how it’s using some of the tech that it has been picking up by way of acquisitions.

Razer’s Chroma lighting technology forms the basis of the lights and colors emitted by the Ariana projector, filling up a room with the same kind of flashes of light that appear on Razer’s keyboards and other hardware. Chroma has been a popular feature to date: Razer said that some 5 million devices have already been sold with it built in.

And while Razer has not made a big song and dance about this detail, it turns out that the Ariana has been built with THX sound technology. You might recall that Razer acquired the iconic audio company and brand late last year with an intention of expanding its business beyond its traditional range of peripherals and traditional gaming audience. Ariana is one example of how that will be carried out, ideally with a network of other hardware and software makers to made it more widely adopted.

“Project Ariana is a concept design that showcases the power and potential of the Razer Chroma platform in the pre-VR world in bridging the gap between gamers and games,” says Razer Co-Founder and CEO Min-Liang Tan. “Video projection, multi-color lighting and the responsive intelligence of our Razer Chroma engine are changing the way we game today. We and our publishing and technology partners are working toward new visual solution for an even more incredible and visually rich tomorrow.” If Ariana is about taking the gaming experience outside of the screen, Project Valerie, pictured above, addresses the fact that many gamers will continue to focus on the screen anyway.

Razer says that the new laptop is the world’s first portable laptop with three built-in monitors. Each of its 17.3-inch 4K IGZO displays includes NVIDIA G-SYNC tech for smooth framerates, as well as 180-degree NVIDIA Surround View gaming. And while it’s potentially a device that could stand in for VR experiences, the Valerie is also built to be VR-ready with seamless integration and support for devices like HTC’s Vive and the Oculus Rift, Razer said.

The screens fold out on hinges that are operated by the user and are optional to use (supported games will change their view as you change the screen setup).

While the initial aim of the Valerie laptop is to offer a wider screen to gamers, Razer is also continuing its wider strategy of building products and experiences not just for the hardcore gaming world. In this case, the company is positioning the computer as a strong contender for those who might need a large screen for other uses, such as design or business professionals.

“Multi-monitor desktop set-ups are becoming more necessary for professionals, creators, and gamers,” said Min. “For the first time, we’ve engineered a solution that users can take with them.”

Still, there is an unmistakable feeling that the three-screen Valerie laptop could potentially go the way of the dodo bird — an outsized specimen too awkward to make it to the next step of how the world of computing is evolving. Only time will tell if enough users will actually want the double-features of super-wide screen plus portability.

And it’s encouraging to see Razer, with both Ariana and Valerie, push the boat out on what a hardware company could and should do, and not necessarily march to the beat of the same drum as the rest of the pack.