While it’s clear that daily fantasy sports games like the ones offered by DraftKings and FanDuel make watching sports more exciting, they aren’t necessarily the best companion if you’re focused on watching one team play.

Let’s use The NFL as an example. Any given Sunday your daily fantasy sports team can have players from 9 different teams – potentially even playing in 9 different games, all live on different channels. Trying to keep up with watching your players and switch between channels is a nightmare.

So while daily fantasy sports can be a great fan engagement tool, it’s not the best second-screen experience to play while trying to just relax and watch one game on TV.

The NBA has realized this, and is launching a new mobile fantasy game called NBA InPlay. The game will be synchronized to live TV broadcasts in real-time, meaning you literally play live on your phone while watching an NBA Game.

Here are the rules: Before a game starts you select one of the two teams competing. Then you pick four players – one per each quarter that you think will do particularly well that quarter.

So I could choose Kevin Durant for the 1st quarter because I know he starts off hot, Steph Curry in the 2nd because that’s when I think he will shoot the most 3s, etc. You then accumulate points based on each player’s performance (points, rebounds, assists, etc) during the quarter you have them picked for. 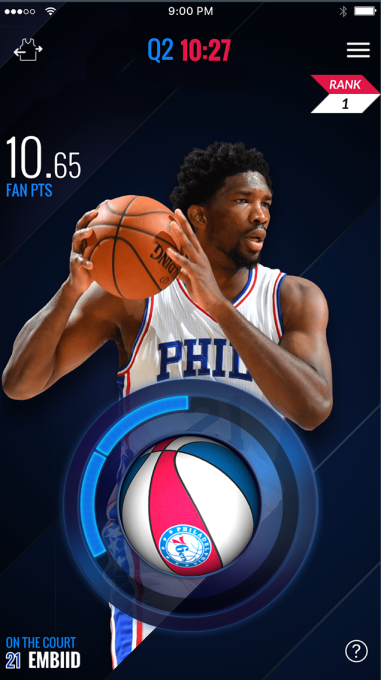 And here’s the real-time component: Each quarter users are granted four “turbo boosts” that they can activate. These boosts launch 48 seconds each and do two things – allow you to accumulate points based on the performance of every player on your team, as well as give you extra points from the player you picked that quarter – both of which only happen during the 48 seconds after you activate a boost.

The NBA is emphasizing the real-time nature of “turbo boosts” – they literally want you to tap and activate it right before someone jumps to make a 3-pointer, or is running down the court on a fast break.

This hyper time-sensitive feature requires your actions to be in total sync with the game’s servers – which is tough considering TV broadcasts are delayed anywhere from 2-10 seconds depending on where you are watching.

So to fix this, NBA Digital detects a silent audio signature in all broadcasts – users grant access to their microphone so it can pick up the broadcast and synchronize their fantasy game with the real game on TV.

The game will launch tonight during the Los Angeles Lakers vs. Miami Heat game at 8pm on TNT, and will be available for every live nationally televised game (on TNT, NBA TV, ESPN and ABC) for the rest of the season – so you should have plenty of opportunities to play. You can either play in the general league with every other fan, or create a private league to just play with your friends.

And the game is free to play with no paid options – something that differentiates it from more traditional daily fantasy sports games, and allows the game to avoid any regulatory issues still surrounding the industry. There will be prizes though – the league will give away gift cards to the NBA Team Store to winners, as well as partner with sponsors to give things away like credit to buy a new car from Autotrader and tickets to the NBA Finals.

NBA InPlay was launched by NBA Digital, the group co-managed by the NBA and Turner Sports that is responsible for other digital innovations like League Pass and the partnership with NextVR.

However FanDuel, the popular daily fantasy sports company that will soon merge with DraftKings, helped NBA Digital develop the app “as part of the company’s efforts to innovate and diversify its offering of gaming options for fans”. The NBA invested in FanDuel in 2014 back when the industry was just beginning its rapid growth.

NBA InPlay is available now and you can download it and start playing tonight.