Super Mario Run may be the first mobile app to pass 40 million downloads in four days’ time on Apple’s App Store, but the game’s payment model has been controversial for its high price of $10 for the full version and limited free play. This has led to roughly half its audience leaving one-star reviews. Despite these complaints, the game has grabbed a huge percentage of mobile game sales, according to a new report from Slice Intelligence.

In its first few days, it accounted for 30 percent of all mobile game spending on iOS devices, the firm found. However, its buying population is already starting to decline. 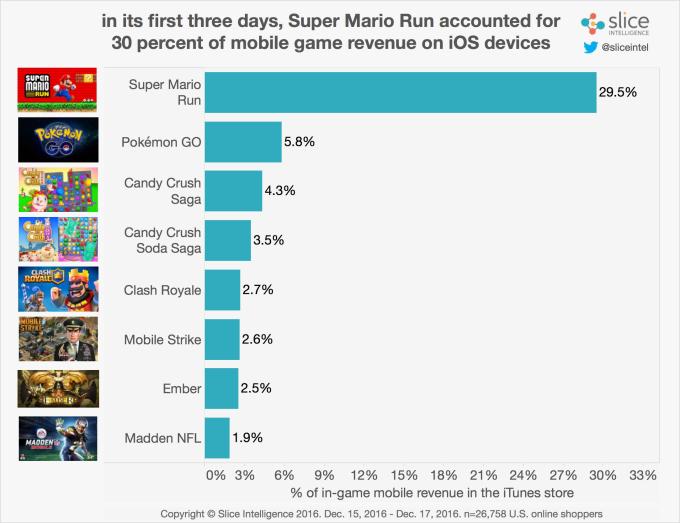 During its first few days, in-app spending on Mario surpassed Pokémon Go, with 3.3 times the number of in-game buyers.

However, this is not the fairest comparison as Pokémon Go and Super Mario Run are very different types of games. Essentially, Super Mario Run requires an in-app purchase to play – it only gives you access to a few levels for free. Meanwhile, Pokémon Go purchases can enhance gameplay, but aren’t necessarily required.

It makes sense that Mario would then attract a larger number of buyers in its first few days on the market – these are the people who actually want to play the game in full, not just take a peek. 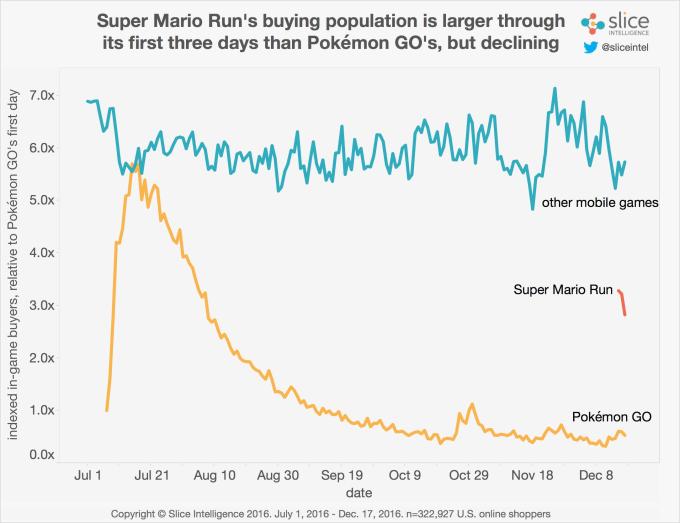 As Slice noted, though, once those early adopters’ purchases were made, the paying population quickly declined.

Pokémon Go, on the other hand, took nine days to reach its peak paying population. And by the time it did on July 15th, 2016, the number of in-game buyers was 74 percent larger than Super Mario Run’s launch day.

There has been some concern that Mario’s business model with Mario may not have been the best strategy. The numerous one-star reviews have negatively affected the company’s share prices, in fact.

Pokémon Go’s decision to offer an addictive, free-to-play experience where in-app purchases can help you buy helpful items and have more fun, may have led to a slower build up of paying customers. But ultimately, this has allowed it to maximize its profits before the game’s popularity peaked.

It’s still too soon to tell if Mario will be continue to be able to attract paying customers, but seeing its paying population decline so soon after launch is not a good sign. 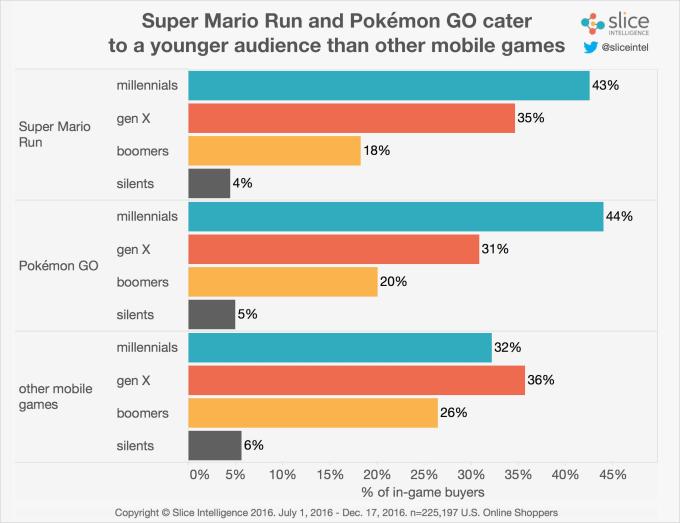 Additionally, Slice found that millennial customers are spending the most on Mario, accounting for 43 percent of the buying population. This is similar to Pokémon Go – meaning, players are younger than the mobile gaming population in general where GenX tends to dominate.

That’s an interesting metric, given that Mario seemed poised to capitalize on GenX nostalgia for the classic game. Instead, it points to Mario’s ability to reach out to a new, younger audience. 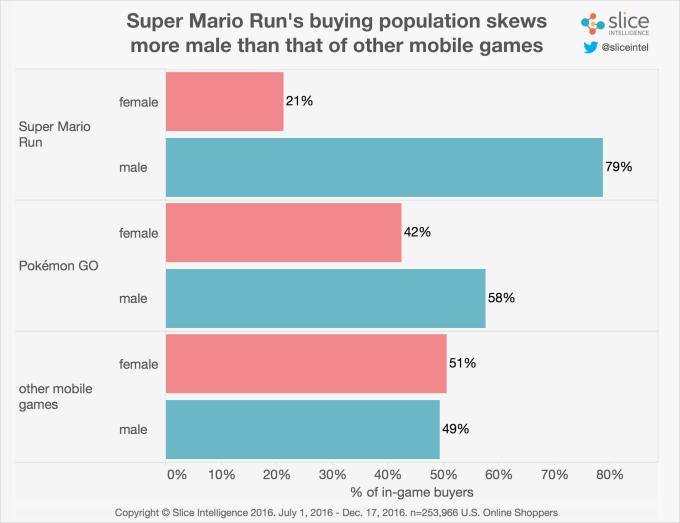 Unfortunately, the gaming population is not that diverse when it comes to gender. The majority of Mario players (79%) are male. This is very different from Pokémon Go, where the split between men (58%)  and women (42%) is less profound. In the wider gaming market, women and men are more equally split, with females accounting for 51 percent of all other mobile games, says Slice.

Slice’s data may not be exact, but it’s a good estimate of larger trends. The data comes from its panel of over 4.4 million online shoppers, whose spending is tracked by extracting details from their hundreds of millions of digital receipts. Its full report is here.