Google (or Alphabet, if you prefer) has long been plagued with a problem with its advertising business: while the number of ads people are clicking on has been growing, the value of those ads has been constantly dropping. Google has always excelled at showing the best ads against a search result, but that business may not last forever as the way people interact with technology starts to change rapidly.

That’s all fine as long as Google can keep those clicks growing and coming along, but as we’ve seen in the case of Apple’s smartphone market share topping out, there are only so many eyeballs to get ads in front of people. And for now, it might be able to keep its stock price in a good place. Google has to keep padding those impressions, or get creative around the way it advertises to its users. Wall Street, as usual, is looking for growth — especially in the largest companies in the world. Apple has more or less been punished (or at least, not rewarded) for its slowing smartphone sales and so far lack of dramatic new growth engines.

And that’s just what the company has been doing. This year, Google unveiled two major new hardware products: the Pixel smartphone and the voice-driven living room assistant Google Home (in addition to a few smaller launches like Google Wifi and an updated Chromecast dongle). These more or less fit into the vision of getting people to engage with Google’s search engine in some active way with the hope that if Google figures out how to get it right, it’ll be able to monetize it down the line.

Whether that will convince Wall Street that Google is able to get beyond the search engine by diversifying its touch points — whether that’s voice, phone, VR or any other new interactive medium — is still yet to be seen. Google’s core competency has always been advertising, and while it might be able to build a business on cloud services (as we’ve seen with Amazon is becoming very successful) or new hardware, Google still has so much data that if it can figure out next-generation advertising products on new mediums it might have a new fantastic growth story for Wall Street.

It needed to at least show that intent to Wall Street. A healthy stock price — and also a story about innovation and looking forward — is important to keep attracting the best talent. Google’s problems are some of the hardest in tech, and it needs to be able to tell a story to not only investors but prospective employees that they can work on those hard problems and also be well-compensated for doing so.

Google is trying to flex the power of its machine learning algorithms, which given the data it has may arguably be the most powerful in the world. That helps Google understand complex queries from products like the Google Assistant — and get people to stick to Google’s voice interface versus Apple’s. Amazon exposed latent demand for a voice-driven interface with the Amazon Echo, and Google is essentially hoping to perfect the experience.

As such, while Google has shown that its advertising business isn’t so challenged, it’s showing that it’s already looking toward the future. And that’s been largely reflected in the company’s share price from Wall Street. Despite some bumps in the road, Google at the very least looks on track to hold steady or end the year up a bit from where it was around a year ago today:

All of Google’s efforts to figure out what the next-generation “search” interface will be will have to eventually play out. The way it works is this: Google’s paid clicks are going up, but the cost-per-click — which is the key metric Wall Street is looking at when it’s looking at the health of Google’s business — is still on the decline. That’s because mobile ads are generally less valuable than the company’s desktop search ads.

Here’s a look at the decline, from the company’s last earnings report: 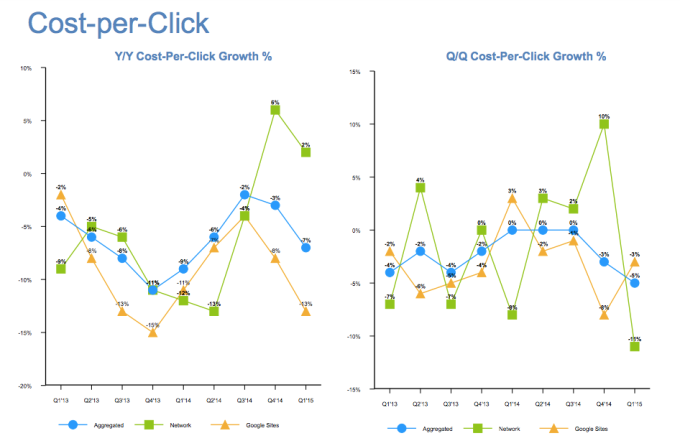 And meanwhile, the paid clicks, also from the last earnings report: 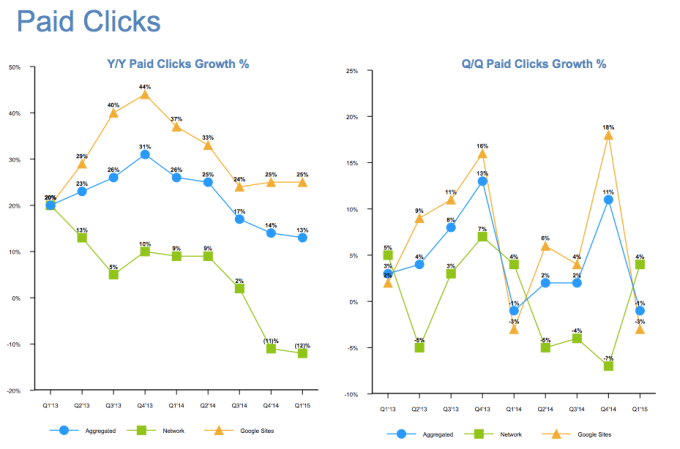 So, if Google’s core business is eventually at risk of a slowdown, or decline, where does it go from here?

Google has shown clear signs that it’s trying to diversify its revenue. Perhaps the largest indicator was the hiring of Diane Green and the ramping up of its cloud services tools in an attempt to challenge Amazon, whose AWS business is rapidly becoming a huge growth engine for Amazon without the excessive costly fiscal baggage of its retail business. Amazon unveiled a huge number of updates to its AWS service earlier this year — including literally driving a truck to your office to put your info into the cloud — and Google is going to be playing catch-up for a while. But, clearly, it’s trying to show Wall Street that it’s more than a search engine.

There’s also its increasing number of updates to its online productivity — which also puts it in competition with Microsoft. It’s also competing with Microsoft through both its cloud services and productivity tools, which Microsoft will never let you forget. And Apple is rapidly trying to ramp up its own services, regularly pointing to the success of things like Apple Music, in order to show Wall Street that it isn’t just a hardware company and can level the playing ground against companies looking to be a combo of hardware and software like Microsoft or google.

And that’s also why there’s a whole section devoted to Google’s “other bets” in its earnings reports, though they haven’t shown themselves to be dramatically successful yet. Google’s core growth engine has been its search ads, but it’s also been known for its “Google X” labs, where it experiments on anything from network fiber to balloons and self-driving cars.

Alphabet — through its CFO Ruth Porat — has been clear that it wants to be more judicious about the way it invests in these other bets. It’s all fine to invest in experimental projects like Fiber and self-driving cars, but if there isn’t a clear path to revenue, the company is going to have to figure out whether or not to move on to the next project and where to devote its resources. Alphabet may be one of the most valuable companies in the world, but even then it still only has so much runway and faces the constant threat from other companies emerging with experimental projects that could be runaway successes (the most obvious threat being the Amazon Echo).

If you wanted any evidence as to how absolutely tiny Google’s bets are for now, here’s a chart for you:

Google saw the demand that Alexa tapped, and it is now looking to essentially smash Alexa — and Siri — with its own assistant powered by machine learning. And there’s a good bet it’ll work. Google has collected data for years and years on how people use the Internet, what kinds of questions they ask a search engine, and where they travel around after those questions have been asked. Google at a very fundamental level has a pretty good understanding of how we tick, and every time you use its services, it gets smarter and smarter. That’s why Google is constantly trying to bury its own interfaces within everything it does.

Sure, Google has a large portfolio of services that it can still throw ads up against. And that, at least for now, is something that can add a lot of value for its investors and keep the ship steady for a while. It has Gmail, with more than a billion users. It has one of the largest browsers in Chrome. In fact, it has a wide portfolio of services with a billion users or more. But those are not Google’s key revenue drivers, and Google has to show that it can keep growing revenue if it’s going to keep Wall Street off its back.

There’s a barrier that Google still has to overcome: while it is constantly learning, refining, improving and helping its users figure out what they are looking for, it also has to do so in a manner that doesn’t seem creepy. Google wants you to be constantly wired to the Internet — whether that’s through your phone, your voice or the way you move throughout the physical world. Google wants to tap your experience through everything from a screen to a virtual reality experience in the case of Daydream. And the company is aggressively spending in order to expand into all of those areas.

Apple still has an ace in the hole. It’s trying to roll out its own wireless earbuds that will give you Siri in your ear and, in theory, because of its proprietary technology it’ll be able to control the entire experience and make it uniquely Apple-y. Like Google, Apple is trying to figure out what kind of user experience looks like beyond the phone. Alexa and Google Home are in the living room, Google Assistant is talking to your phone, but the Airpods and Siri are a sort of wild card that we don’t know how it will play out yet.

In short, Google hasn’t cleared the way and gotten away from its existential crises. As long as those paid clicks keep going up, it’ll be able to keep the runway and hopefully figure out how to apply its strong machine learning capabilities to wherever users are drifting to next. And then once it gets people comfortable talking to, or clicking around, on their controlled user experience it can figure out how to monetize them the way it knows best — through advertisements.

Alphabet’s opportunity is very big. For a moment earlier this year, Alphabet was the most valuable company in the world. In the face of slumping hardware sales, Apple clearly showed the risk that comes with focusing on a business beyond simply hardware, and that for growth it’s important to have a revenue base that exists as a collection of software and hardware. That’s what Google is looking for, with the unifying component being whatever search looks like after people are no longer using a search bar. And it’s a new story for Wall Street that just might work.