Teen app sensation Houseparty will get some competition as Facebook Messenger is launching its own split-screen group video chat feature. Six users can appear in split-screen at the time and don Snapchat-style selfie masks, while 50 total can listen and talk over voice while sending text, stickers, emojis, and GIFs.

The feature could make a Messenger a place to “livechill” with friends rather than just a way to send texts to exchange more utilitarian information or plan logistics. Instead of just popping in to fire off messages, you could hang out for extended periods on the app. Facebook frames it as “perfect for those spontaneous moments where text just isn’t enough”.

Group video chat starts rolling out worldwide on iOS, Android, and web, today, though Android will have to wait for the MSQRD-powered selfie masks that might not ever come to desktop. It’s free on wi-fi but standard data charges will apply on cellular connections.

The launch makes Messenger the first popular western messaging app with group video chat. It’s managed to beat FaceTime/iMessage, Google Duo, and Snapchat to the punch. Messaging pioneer WeChat added it a year ago. WhatsApp pushed video calls last month, and can handle groups video via Booyah. [Correction: WhatsApp lacks a native group video chat feature.] Google’s neglected Hangouts app launched many of these features back in 2013, but it hasn’t become a core place for text messaging, making it more of a specialty app amongst Google’s fragmented communication family. 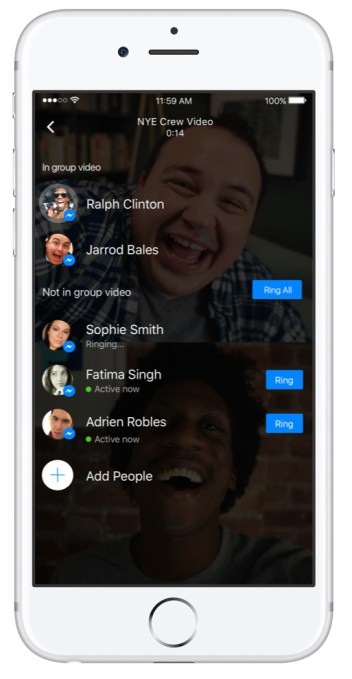 US teens might be most familiar with the format from the recent rise of Houseparty, the new app from the makers of Meerkat. We profiled Houseparty’s climb to 1.2 million daily users as it becomes a laid-back “livechill” group alternative to exhausting performances on live broadcasting apps like Facebook Live. It’s since briefly climbed into the top 5 iOS apps and raised $50 million led by Sequoia.

Messenger group video chat works a little differently, but with a similar design. Instead of simply logging into an ever-present video chat room that notifies friends like on Houseparty, you deliberately select friends or a group text thread to invite to a video call.

Once in, up to 4 Messenger users can share big slices of the screen, while Houseparty accommodates 8. Between 4 and 6 callers, the Messenger screen switches to a gallery format, with whoever is speaking taking up the bulk of the screen with little thumbnails of everyone else at the bottom. And everyone beyond the first 6 up to 50 callers will only be able to listen, speak, and send content but won’t appear in the video gallery.

By embracing group video chat, Messenger becomes more of a communication destination rather than just a sporadically used tool. Along with its Active Now feature, we could see it becoming more of its own full-fledged real-time social network, while Facebook proper becomes a hub for consuming existing content.