You’ve probably seen a few of these smart paper or smart pen things over the years — write in this special notebook and it gets saved to an app, that sort of thing. A new entrant to this niche space is the Everlast notebook, which obviates the necessity of restocking proprietary paper in that its pages can be wiped clean with a damp towel.

No, to answer your first question, it’s not a tiny whiteboard. The Kickstarter page is very clear on that:

The 36 pages (or 32 on the large-format version) are a “waterproof synthetic poly blend,” which when written on with a pen from the Pilot Frixion line can be wiped off over and over again, but only with a wet towel — normal rubbing won’t do it. It’s important to use the Frixions because they use an erasable ink that comes off the page completely (you can also just use the eraser for quick edits).

When you’ve written on the Everlast, you can then capture images of the pages quickly with the Rocketbook app. The Rocketbook, by the way, was the notebook the company funded earlier this year, which you erased by putting it in the microwave with a glass of water for a while and then vacuuming up the ink. Yes, really.

Your notes and sketches aren’t stuck in this random app, though: it’s just for scanning. When you snap pictures, it crops and processes the image and then sends it to the cloud services of your choice. 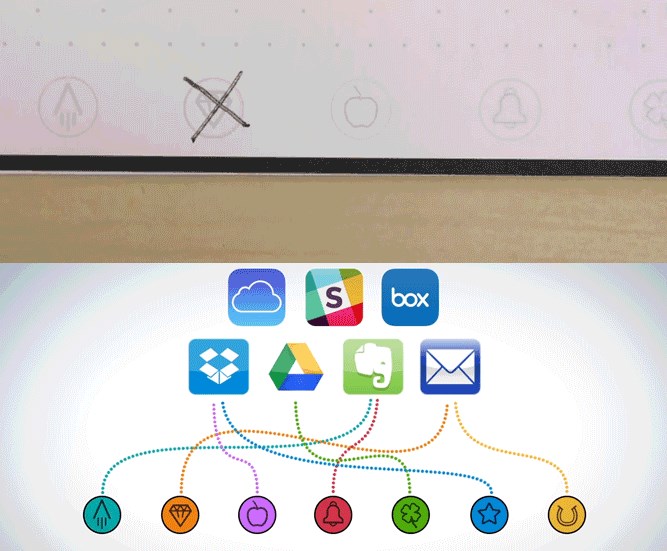 The clever bit is that you don’t even need to fiddle with the app to do that. You select the services each page should go to by marking them at the bottom. The symbols look more like Lucky Charms marshmallows, but you’ll get used to it. You can send stuff to Dropbox, Evernote, Google Drive, Box, Slack, or to an email address.

A couple minor caveats: the creators are honest about the fact that if you’re left handed and tend to drag your hand along what you’re writing, you’ll probably smudge it, since the Frixion ink takes several seconds to bond to the “paper.” And if you leave the ink on the page for more than 2 months, they say, it’ll leave a faint trace.

The Everlast isn’t going to change the world, and it isn’t for everybody, but this is a cool way to do the analog-digital thing these other notebooks do, for cheap ($34 for early birds) and without actually using any paper.