We might finally get to stop asking, “Wait, what’s your Skype name?” thanks to a test of new Facebook group audio calling on desktop. Facebook launched group voice calls on its mobile Messenger app in April, and now it’s working out the kinks to bring the feature to your home and office. It could become a useful alternative to traditional conference calls by piggy-backing on Facebook’s ubiquitous identity platform.

Facebook confirms to me that this is a small test right now. Those with access will now see a phone icon on their group chats that they can hit to instantly invite the members to join the call. 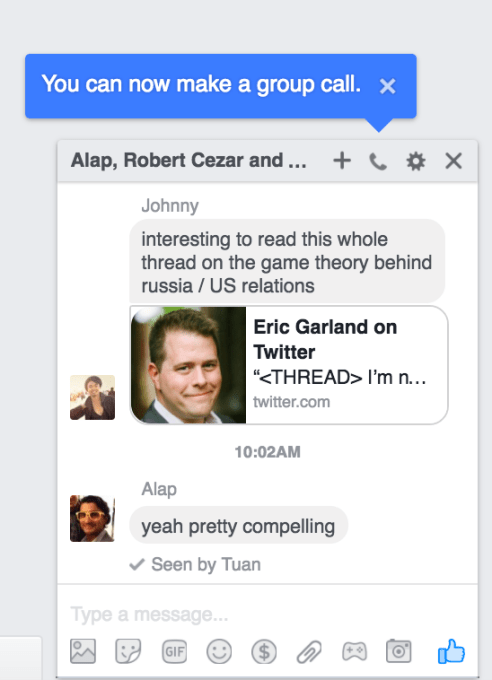 As messaging evolves beyond text and towards rich media, chat apps are racing to embrace voice and video.

Facebook first started offering audio calling on desktop back in 2013, but now it’s making VoIP more social. Group chat has come into the spotlight lately thanks to the rise of Houseparty. We profiled this group video chat app from the makers of Meerkat last month, calling it the place where teens “livechill” instead of having to give exhausting solo performances on broadcasting services like Facebook Live. Then last week, Houseparty hit #4 on the overall iOS app charts and raised $50 million led by Sequoia.

We’ve long speculated that Facebook Messenger should launch its own group video chat feature, but there’s no telling when that will happen.