Ready for your Fire TV to get a makeover? Amazon says it will today begin to roll out an update that will bring new user interface, described as a “more cinematic experience” to Fire TV and Fire TV Stick. The revamped interface, which makes Fire TV look more like Netflix, was previewed earlier this fall, when Amazon released its latest Fire TV Stick.

Where before, navigation was off to the left side of the screen, it’s now at the top. This gives Amazon more room to show off things like video trailers and still images from the shows and films it’s featuring.

The interface takes advantage of this new layout to showcase Amazon’s content at the top of the screen, where it will rotate through video snippets for select titles and apps, says the company.

Like Netflix, there are also rows of thumbnails you can scroll through when you’re browsing for something to watch. However, with Fire TV you can actually take control of one of those rows for yourself. The “Your Apps & Games” row on the homescreen can be customized using your remote, so you can rearrange its content to include your favorite apps. 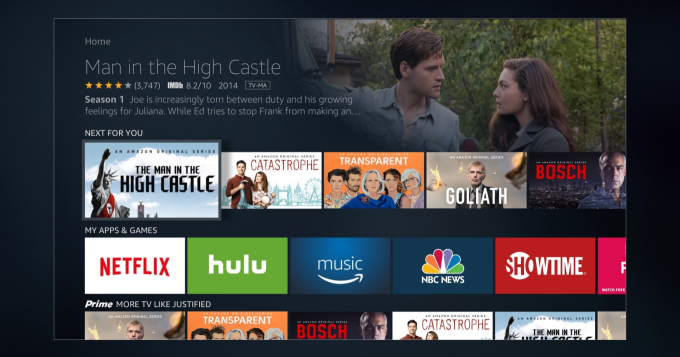 In addition to the improved user interface, the update is largely focused on personalization, a major battleground for all streaming services and streaming media players today. One of the more interesting things Amazon is doing here is pulling in content from third parties like HBO and Netflix, so you can see those companies’ recommendations right on the Fire TV homescreen. Amazon is even giving each of these their own row in the new interface.

That’s not to say the company isn’t going to promote its own content, when it can. Its titles will still be shown in heavy rotation at the top of the screen, and it’s also making Amazon Music, Prime Photos, and Amazon FreeTime pre-installed applications. You can find these in the “Your Apps & Games” section going forward.

The update includes a few other minor improvements, too, like the option to PIN protect apps in the parental controls and accessibility enhancements for customers with hearing or visual impairments.