Along with the launch of updated tvOS software for Apple TV, Apple today also began rolling out the latest version of iOS, which at last brings the expanded lineup of new emoji to all users. In iOS 10.2, there are hundreds more emoji to choose from, including more diverse characters, more emoji representing different professions, more food, sports and animals, as well as several of the more anticipated arrivals like the facepalm, shrug, selfie, clown faces, whiskey glass and more.

The update brings full Unicode 9.0 support — meaning those emoji that have been approved by the standards body that decides how our pictogram-based communications will evolve.

Over the years, the consortium has steadily added improvements to the emoji lineup, including the ability to choose the skin tone for the people characters and hand gestures you send. This time around, you’ll be able to represent more professions via emoji, including teacher, welder, coder, business worker, farmer, chef, student, mechanic, doctor/health worker and even astronaut.

There are also tons of new animals and several more foods, drink glasses (hooray whiskey!), along with a number of sporting-related emoji, including medals, that will help in the future when sending messages about the Olympics.

Among the people emoji is the facepalm gesture and often-used shrug, which we today tend to type using characters like this:¯_(ツ)_/¯. Hand gestures include the extended arm for a selfie, crossed fingers, handshake, “call me” hand, fist bump and raised back of hand. There are also new face emoji, like the green, sick guy and the Pinocchio-nosed liar. (Hmm, that could come in handy.)

In addition to the new characters, Apple has redesigned the emoji in iOS 10 to “reveal more detail.” But this move briefly became controversial when people discovered the new peach emoji — popular for sexting (it’s clearly a butt), looked entirely different in one of the iOS 10.2 betas.

Following some internet backlash about the matter, Apple decided to bring back the classic peach butt instead. Sexting was saved. 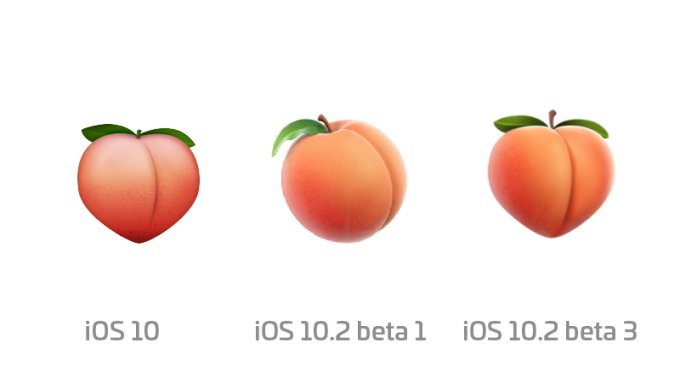 Along with the added emoji, 10.2 brings new iMessage effects, the TV app, new wallpapers and other fixes and enhancements.