If I remember correctly, 2016 was supposed to be the year that VR took off.

While this year undeniably saw the entrance of quite a few major hardware initiatives from the major players (Google, Oculus, HTC, Samsung and Sony to name a few), 2016 still had quite a tough time grappling with some of the virtual reality industry’s most burning questions.

Making VR cheaper and making sure it works on a device you already own have been a couple of those issues. Software wizardry from Oculus in reducing the hardware needs of minimum spec PCs and Google’s work in bringing high-quality VR to Android phones through Daydream have been effective in beginning to solve some of VR’s structural problems.

But what has ultimately been the most difficult task is convincing consumers that 2016 VR is fun. For many owners of Oculus’s Rift systems, the headsets only offered a few weeks of good times before they were shoved to the back of the shelf and left to gather dust.

Part of this was the lack of cool new content but a good deal of it was the headset not meeting the expectations of its users.

Nine months after the launch of the Rift, tomorrow Oculus is shipping its Touch motion controllers to the public. The $199 peripherals are more than just a new accessory for the Rift, they’re a complete system rebrand; the experiences the controllers enable are the most fun I’ve had in VR to date.

One quick thing right off the bat, if you already have a Rift headset and you intend to keep playing with it, you realistically pretty much have to buy Touch. Otherwise you’re going to watch cool new games come and go that you won’t be able to play with the dinky Xbox controller that’s included with the Rift. Luckily these new controllers are great so you should probably buy them anyway.

The more worthy question however is likely whether these new controllers give those who have been on the VR fence a reason to buy the Rift and embrace Oculus’s brand of high-end virtual reality.

What you’re buying really isn’t a pair of controllers, you’re paying for access to the next generation of virtual reality content. Touch is the future of VR at Oculus ergo Facebook ergo the broader VR industry. The 53 Touch titles launching tomorrow offer a glimpse into some of the high quality experiences you’ll soon see.

The Touch controllers bring your hands into VR letting you pick up objects, and use them will pizzazz. The controllers are a wild dream for first person shooters, and kept me playing demos over and over again for hours as I attempted to get the quickest draw and the most precise shot. What Touch offers is the ability to not only observe virtual reality but to manipulate it.

The Touch controllers enable the richest overall experience you can have in virtual reality right now. The tracking may still be better on the Vive but the enhanced ergonomics of the Touch controllers coupled with its diversity in control inputs gives it a strong advantage when it comes to gameplay. Ultimately its most damning weakness is price where the $200 controllers and $79 third camera sensor put the already $599 Rift headset in a distinctively high-end product category. 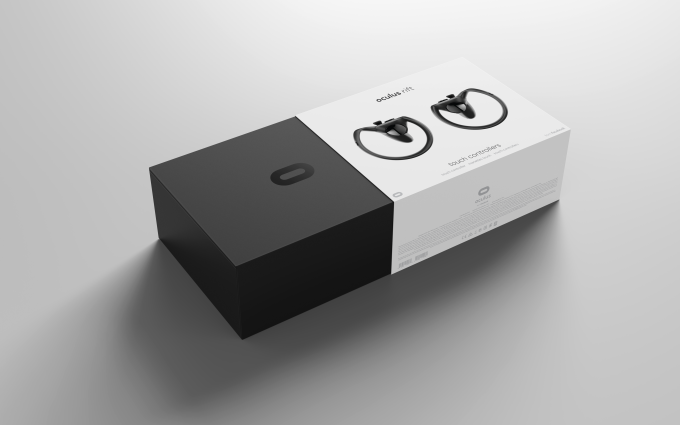 The best that can be said of a gaming controller is that it fades from your view and acts as an extension of your mind.

The Touch controllers are imperfect, but they’re a far better set of VR controllers than we’ve seen in the past and they truly bring the controls needed by this generation of VR titles.

The capacitative buttons on the Touch controllers allow the system to infer things about your finger positions. The controllers can use these cues to infer whether your hand is in a fist or is pointing at something. Of the launch titles I’ve tried, developers haven’t gotten too crazy in attempting to integrate the hand gesture tracking system. There seems to be some good potential here for social interactions however.

Certain things are just perfect. The grip buttons on the HTC Vive are difficult to press and as a result have been largely abandoned by developers as an action trigger. The grasp and trigger buttons on Touch, however, make holding and using tools effortless. It’s clear there are design improvements that can still be made, this year Valve showed off a prototype of a VR controller that attached to a user’s wrist and could allow them to let go of the controllers without dropping them.

The Touch controller’s ring of sensors which wraps around the outside of your hand not only gives the tracking sensors a more visible footprint but they also give you a nice set of plastic knuckles for when you inevitably hit something or someone. I was on the receiving end of this a time or two, so all I can say is if you’re watching someone play Super Hot VR stay out of their way…

Every set of Touch controllers includes an additional camera sensor to improve the tracking quality needed for the breadth of movement that Touch demands. With two sensors, the recommended play space is about 5×5 feet which is pretty easy to push some furniture out of the way to achieve.

Setting up Touch is simple and pretty much just means plugging the other sensor into your computer and setting up your play space. The Guardian system operates almost identically to the SteamVR Chaperone System with a light grid tracking the outer boundaries of your play space so that you don’t run into your wall or punch your monitor while you’re in a particularly intense scenario.

The Oculus Touch controllers come in at a pricey $199, but the fact is that you will likely end up spending $280 to bring the full benefits of motion tracked input to your experience. The addition of the third sensor is ultimately far less optional than Oculus would have you think. It’s likely that no game will ever really require that you possess the third sensor camera (available on the Oculus website for $79) but if you’ve already sunk the costs of a fairly expensive gaming PC, a $599 headset and a $199 pair of controllers, the third tracking sensor really is something you should plop down the cash on.

The reason it’s necessary is twofold.

First, Occlusion, whereby your body blocks the camera sensors from gathering the signal dispatched by the Touch controllers, is a considerable problem if your sensors are only in front of you and when tracking drops it really messes with immersion. The third camera sensors takes care of this space and while I still suffered more dead spots with my setup of three Oculus sensors than I have with the Vive’s two, it was still a largely pleasant experience.

What is perhaps more important is that developers that aren’t being funded directly by Oculus’s efforts are likely going to use the Vive as the system they build for first due to how kickass SteamVR’s tracking system is and the scalability of Valve’s Steam store for supporting multiple systems. While Oculus games like Dead and Buried can ensure that you’re always facing towards the monitor, the most immersive experiences that leave you unsure which direction your body is oriented will stress the limits of the 2-camera setup very quickly.

On a quick note, people will complain that the recommended play space for Touch room-scale is significantly smaller than the Vive but I had no problem accommodating a 12×12 foot area with three sensors after a bit of finagling.

Ultimately, Oculus really isn’t giving you much of a choice on whether to upgrade, given that many of the major titles arriving this week and in the coming months will require Touch and won’t support the Xbox One controller. This kind of planned obsolescence for early hardware is always annoying and while the Xbox One controller will continue to be used on future titles for Rift, you’re really not getting the most out of your system unless you plop down the extra $199 for Touch and the $79 for the third tracking sensor.

Luckily, these new controllers are fantastic and offer the best look yet at highly immersive virtual reality experiences. They’re brilliant, but they’ll cost you.

With console headset systems like the PlayStation VR dancing in the more affordable $500 range and a new line of VR headsets from Lenovo, Acer, Dell and others starting in the $300 territory, it’s unclear what the future of high-end VR looks like, but if you decide that you’re looking for the best possible experience from a consumer VR headset, look no further.