Jolted into existence with a $500,000 Indiegogo campaign back in 2013, followed by a version 2 that was sold in Apple Stores all over the world, Beddit is back with a third generation of its popular addition to the Quantified Self movement: sleep tracking. The product went on sale in September and immediately sold out, and the company is still selling Beddit 3 faster than it can make them.

“I used to be an elite triathlete,” Lasse Leppäkorpi, founder and CEO of Beddit tells me, when I ask him how he ended up dedicating his life to sleep. “I was trying to qualify for the first-ever triathlon at the Sydney Olympics in 2000, but I tried too hard. I was diagnosed with overtraining syndrome, and started a long recovery process.”

So far, we have collected over 3 million nights of sleep data. Lasse Leppäkorpi

Part of the recovery was to pay very close attention to several health metrics, which included wearing a chest band 24 hours per day to monitor the recovery and to keep track of when Leppäkorpi would be able to train again. He soon discovered that trying to sleep while wearing a device was hard.

Fast-forward a few years, and Leppäkorpi was working on a PhD at the Helsinki University of Technology, with the aim to solve this exact problem. 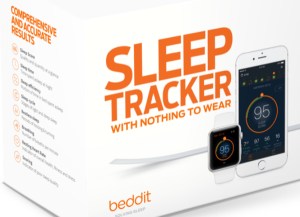 “I started a PhD around the methods for measuring the forces that come from cardiac activity coming from outside the body. The field of medical science is called ballistocardiography,” Leppäkorpi tells me. As luck would have it, a lab mate had invented a sensor that worked particularly well for this technique, and the idea for a company was born.

Beddit originally planned to market their products to hospital bed manufacturers, but given that this was happening in 2008 and the world was reeling from a financial collapse, the company started looking elsewhere. The company discovered that there was a huge movement where people were interested in quantified self, and that helping sleep better at home was a strong idea.

“So far, we have collected over 3 million nights of sleep data, in what is one of the most comprehensive data sets on the topic in the world,” Leppäkorpi explains.

The newest version of Beddit — Beddit 3 — comes with a number of new improvements and innovations. The previous version of Beddit needed to be stuck down to the mattress, which worked well, but meant that the installation was semi-permanent. I tried removing a Beddit 2 from a mattress, and you can tell where the strip used to be installed; not great if you live in rented accommodations and you have to explain to the landlord why it looks like you had a strip of tape across your bed.

The new version is removable and portable, and moves the electronics away from the sensor strip; instead, the brain of the device lives in the USB plug. Smart, because it means that it becomes easier to move the device, and the installation options are more varied, as well. The USB plug itself also gains temperature and humidity sensors to collect additional data points into sleep research.

“Our other big epiphany was that we didn’t just want to track sleep,” Leppäkorpi tells me. “Going forward, there is an opportunity for Beddit to be the Fitbit for sleep. We are making it easier to tag the things you do in life, and it analyzes your sleep against the tags you’ve added, so you can start seeing how the various aspects of your life affect your sleep.”

The company is also working with sleep experts who can offer additional insights into why you aren’t sleeping as well as you should be. Beddit 3’s sensor feels and looks like a strip of cloth that runs across your mattress. It tracks respiration rate, heart rate and movement.

The final innovation on the new product is the use of a capacitive touch sensor to determine whether you’re in bed or not.

“The old automatic tracking didn’t work as well as we hoped,” Leppäkorpi explains, “which means that our customers had to remember to tell our app when they were in bed or not.”

Obviously, people were prone to forget, and missed out on valuable data as a result. The new sensor works far more reliably, but can cause some weird side effects. For example, I plugged the sensor into my USB power hub next to my bed (tech journalists, eh?), but there was some sort of weird interference: Whenever I touched my iPhone 7’s home button, it would activate dozens of times per second. Beddit blames the USB power, saying that “disturbance caused by mains hum coupling through Beddit or some near field loop passing switching power frequency,” and suggested I use the included USB power adapter instead. I’ll readily admit to being slightly grumpy about this: Having my sleep monitor taking up a wall socket while I have a perfectly fine USB power socket right next to my bed feels like a step backwards, but maybe that’s something the company can address in a future revision of the product.

Either way; Beddit 3 is a huge leap forward from the company’s predecessor. If you have one of the older devices, getting reliable automatic tracking is worth the upgrade, I reckon. And if you don’t, but are planning to start tracking your nocturnal Zs, Beddit is the best solution out there. At $149 it isn’t cheap, but it is undoubtedly a deeply impressive piece of kit. If you’re willing to invest in tracking how much exercise you get, it stands to reason to also figure out which factors have an effect on how much you sleep.