Hyperloop Transportation Technologies (HTT), the counterpart startup to Hyperloop One, which is also building a prototype of Elon Musk’s hyperloop system, says it has raised a little over $108 million dollars to build the tech aiming to zip us from San Francisco to Los Angeles in under half an hour.

To be clear, the company has raised a total of $31.8 million in cash from investors and counts the rest — $77 million — from man-hours, services rendered, land rights usage and future in-kind investments.

HTT comes out of JumpStartFund, a crowdsourcing platform for early stage tech companies, and was developed as a project running on the work of volunteers who offer their in-kind services for equity in the company.

According to HTT, several companies have joined to offer their in-kind services, including composites manufacturer Carbures Europe SA; design and engineering firm Atkins; brand and marketing firm Anomaly Communications LLC; European-based AR and VR company Reflekt GMBH, which plans to help HTT with its proposed augmented windows inside the hyperloop system; and Leybold GmbH, a Cologne-based firm specializing in components for building industrial vacuum pumps, which is a key part of the technology involved inside the hyperloop system.

While we have yet to see a prototype and HTT canceled last minute a visit from our team to check out its product, the involvement of these companies could signal HTT is building something real.

HTT claims to have crowdsourced work from more than 603 individuals, including “more than 200 professionals from 44 companies in 38 countries” who’ve contributed their time and talents to developing HTT’s technology.

However, there have been some concerns over the claims from HTT co-founder Bibop Gresta before. In an Australian news article, Gresta was quoted as saying he’d met with representatives from the Queensland State Government about building a hyperloop there. However, RN, the news site which ran the article, updated the article after contacting this government department, saying the department was “not aware of a meeting between department officials and either Gresta or the Hyperloop Transportation Technologies company.”

Update: Despite the report, it appears HTT did meet with at least one of those government officials, Phillip Dalidakis MP, a Labor member of the legislative council in the Victorian State Parliament, representing the Southern Metropolitan Region:

I've met with @BibopGGresta & spoken with him abt the huge potential of @hyperlooptech #innovation https://t.co/pdSfWx3ya1

HTT also tells TechCrunch it has discussed the possibility of building a track for a route between Sydney and Melbourne. And, according to HTT, “The response was very positive but [officials from the Australian government] warned us they were going to face a busy period for the elections and that they were going to come back to us soon. After several attempts to reconnect in the following months everything went silent.”

HTT now says it is checking back in to see if there’s still interest. We’ve contacted Dalidakis and others to see if the proposed track is still a possibility and are waiting to hear back.

HTT also has plans to build a hyperloop in the futuristic town of Quay Valley, California. Gresta told several media outlets at the beginning of this year, including TechCrunch, it was about to break ground there for its hyplerloop system but so far all we’ve seen are some renderings of what it might look like. 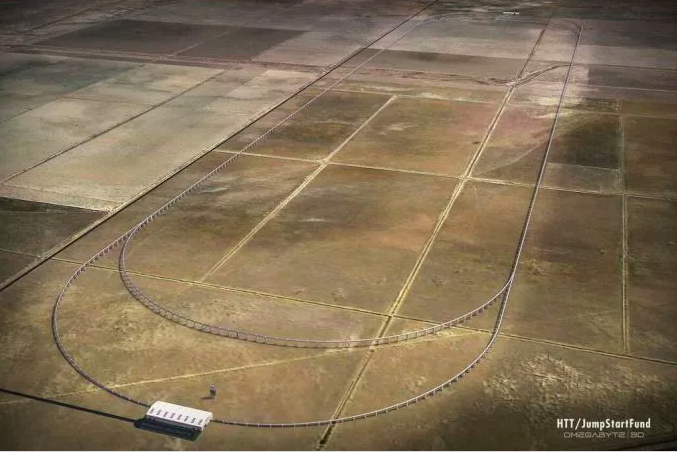 The company later told TechCrunch it would be testing a demo train in 2017 and offered more renderings of what its system would look like.

When we inquired, a company spokesperson told us HTT has done most of the testing, that the Lawrence Livermore maglev system the company is using has already been done full scale and “getting ready to build full-scale passenger systems in multiple areas and in negotiations with several other nations.”

HTT also told TechCrunch it is working with the county for the town of Quay Valley to take steps into building there but said there were certain things “out of our control.”

Of course, any new technology is going to take time to build and sometimes these things take longer than a startup might have initially anticipated. But there’s a race to be first in the space and at least one contender already laying down tracks.

Undaunted, Gresta says the company is “on track” for where it should be. “We plotted a course and maintained it,” he said.

CEO Dirks Ahlborn added, “Hyperloop Transportation Technologies is more than a company, it is a movement. We have many people who followed their passion and joined the company at the beginning, working for equity making the company worth of millions.”