To project or not to project, that is the question.

For a growing number of individuals who are happy using their smartphones, tablets and notebooks for the bulk of their media consumption, a projector makes a lot of sense vs. a traditional TV for occasional big-screen viewing, and Xgimi’s new H1 is an even better fit than most for the mobile generation.

The Xgimi H1 is currently available for pre-order via a funding campaign on Indiegogo, but the review unit the company sent is definitely already production-ready. The projector is about the size of a medium-sized Bluetooth speaker (and it doubles as one as well), but provides a screen of up to 300-inches in size with true 1080p output, better sound than you’ll hear from far more expensive projectors, and a built-in, Android-powered computer that means you really don’t need any other devices to get a full home theater experience.

A simplified screen, with some limitations

Projector setup can be frustrating, especially when it comes to getting the angle right. The Xgimi H1 has automatic keyframe adjustment, and it’s effective enough that I was able to get a clear, aligned picture working pretty much out of the box with minimal fuss. That’s a huge advantage, especially when the total package is small enough that you can see yourself moving the projector around frequently to use it indifferent places (more on this later).

The picture quality is good – crisp and clear, with bright, vivid colors. It’s not the kind of projector that can contend with a whole lot of ambient light, however, so don’t expect to use this in the middle of the day with the windows unblocked by curtains. It’s 900 ANSI lumens are still effective with reasonable measures taken to prevent too much light getting in, like thick curtains or whenever used in the evening, however – which is true even for most home theater projectors that cost $500 to $1,000 more than the H1. 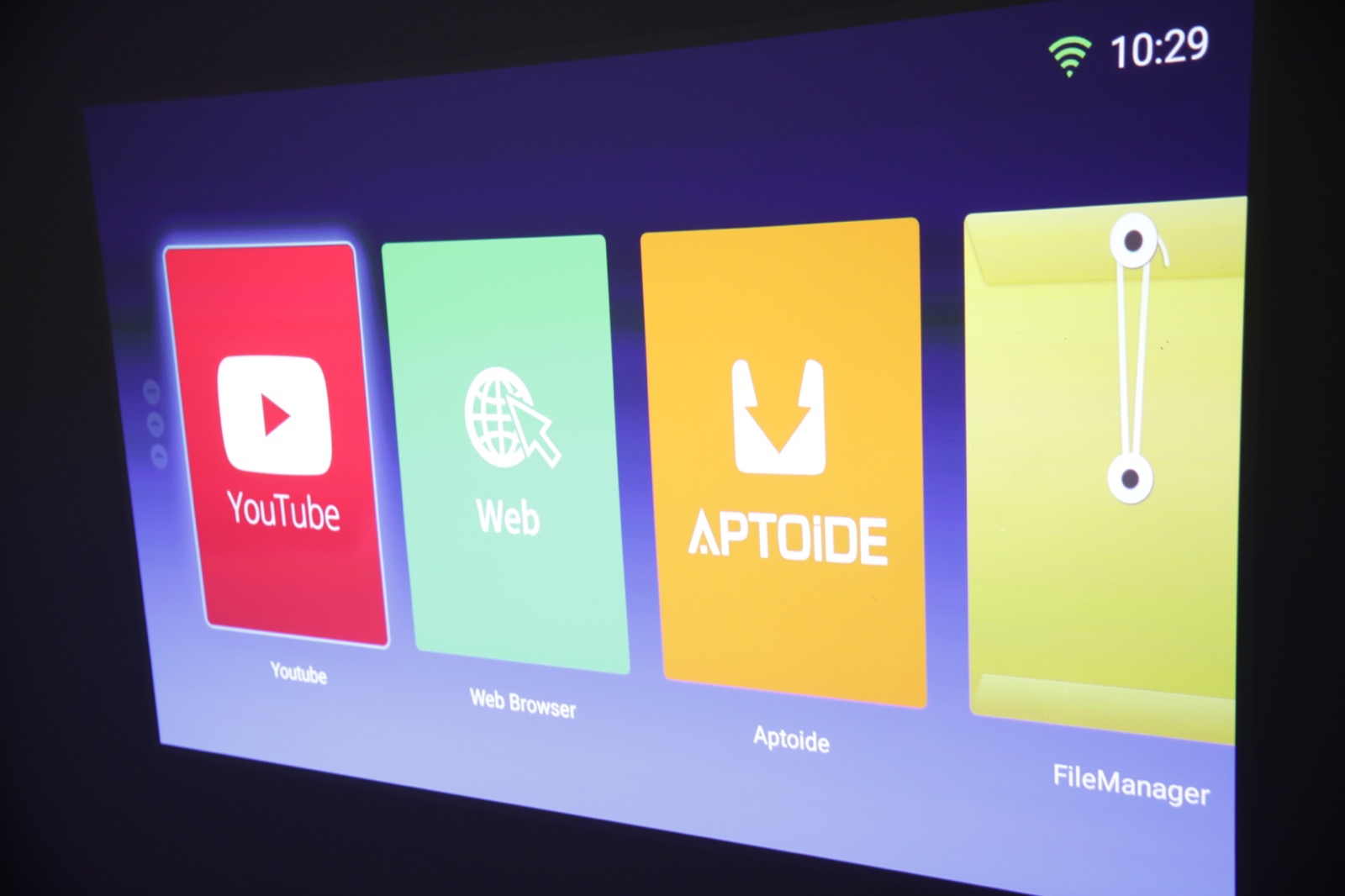 My only real qualm with the Xgimi H1 in terms of its projected image is that size adjustment and vertical angle are entirely manual processes. Unlike other dedicated home theater projectors, the H1’s only means of increasing the size of the picture is what I like to call “foot zoom,” which means you have to adjust its physical distance from the projection surface. Others offer an optical zoom on the projection lens itself. Likewise for the angle of the lens – many competitors will offer physical “feet” which can adjust the tilt, but the Xgimi has to be placed at the proper height to hit the projection surface with a screen where you want it – which can be tricky depending on your available mounting options.

The Xgimi is unlike other projectors in another, much more positive way; while smart TVs have loaded in operating systems, apps and access to services, most mainstream home theater projectors are basically just output waiting for cable connections to other devices. The H1 has its own processor, 3GB of RAM, and an Android-based OS that provides direct access to content-filled apps like Netflix and Plex.

The interface isn’t native Android TV; it’s Xgimi’s own flavor of the mobile OS, reconfigured for big-screen use. Android TV is a little more visually rich and user-friendly, but the Xgimi interface is very usable, especially with the included Bluetooth remote/gaming and motion controller the company includes int eh box. 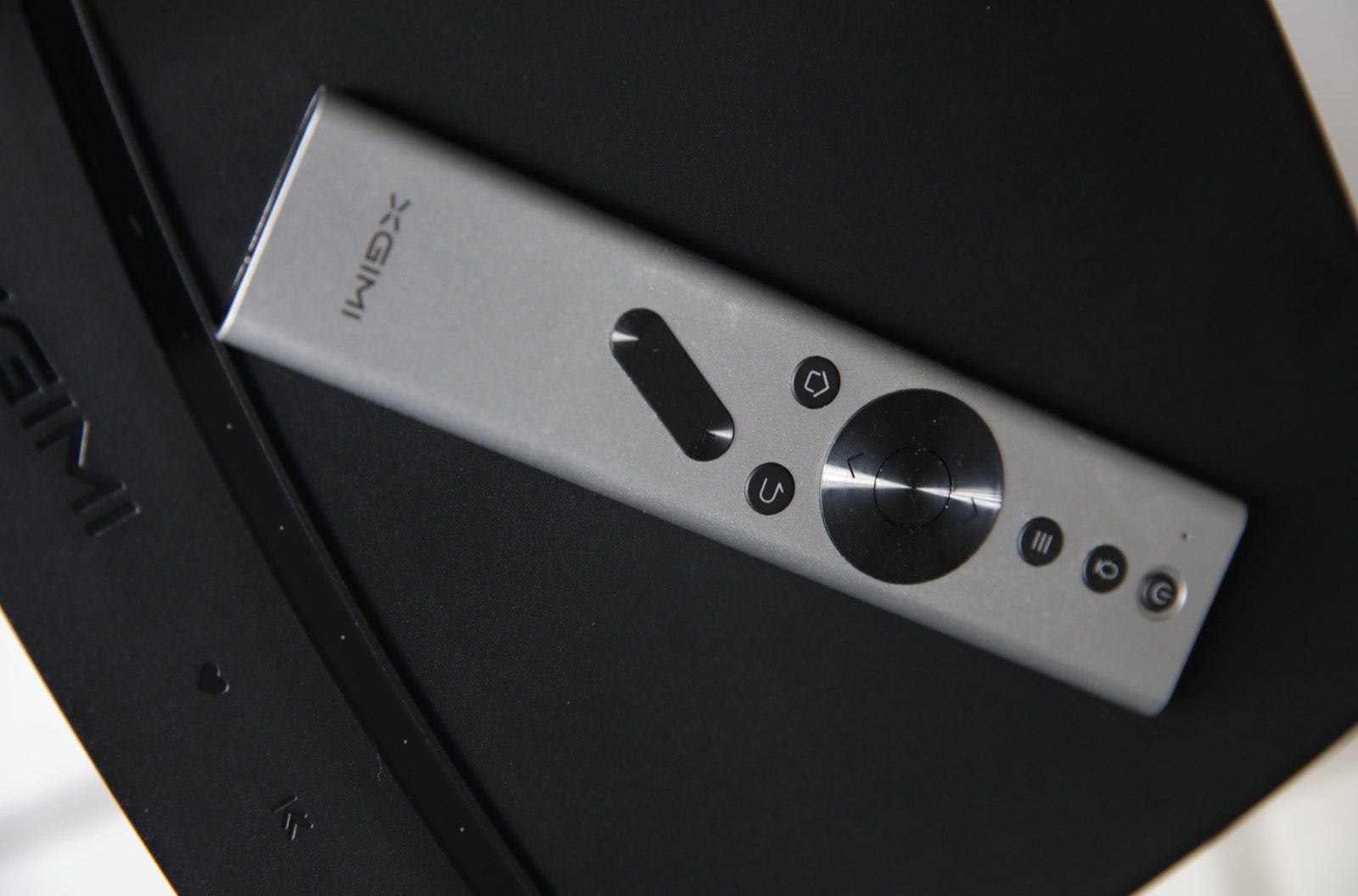 To be clear, the H1 still has plenty of inputs and outputs, including two HDMI ports, one USB 2.0 and one USB 3.0 port, and an Ethernet port, for connecting to external devices. But it’s also completely self-sufficient, with built-in Wi-Fi, meaning you can plug it into power anywhere you have a data connection (or stored local media) and get to viewing, without needing the other components of a typical home theater setup. 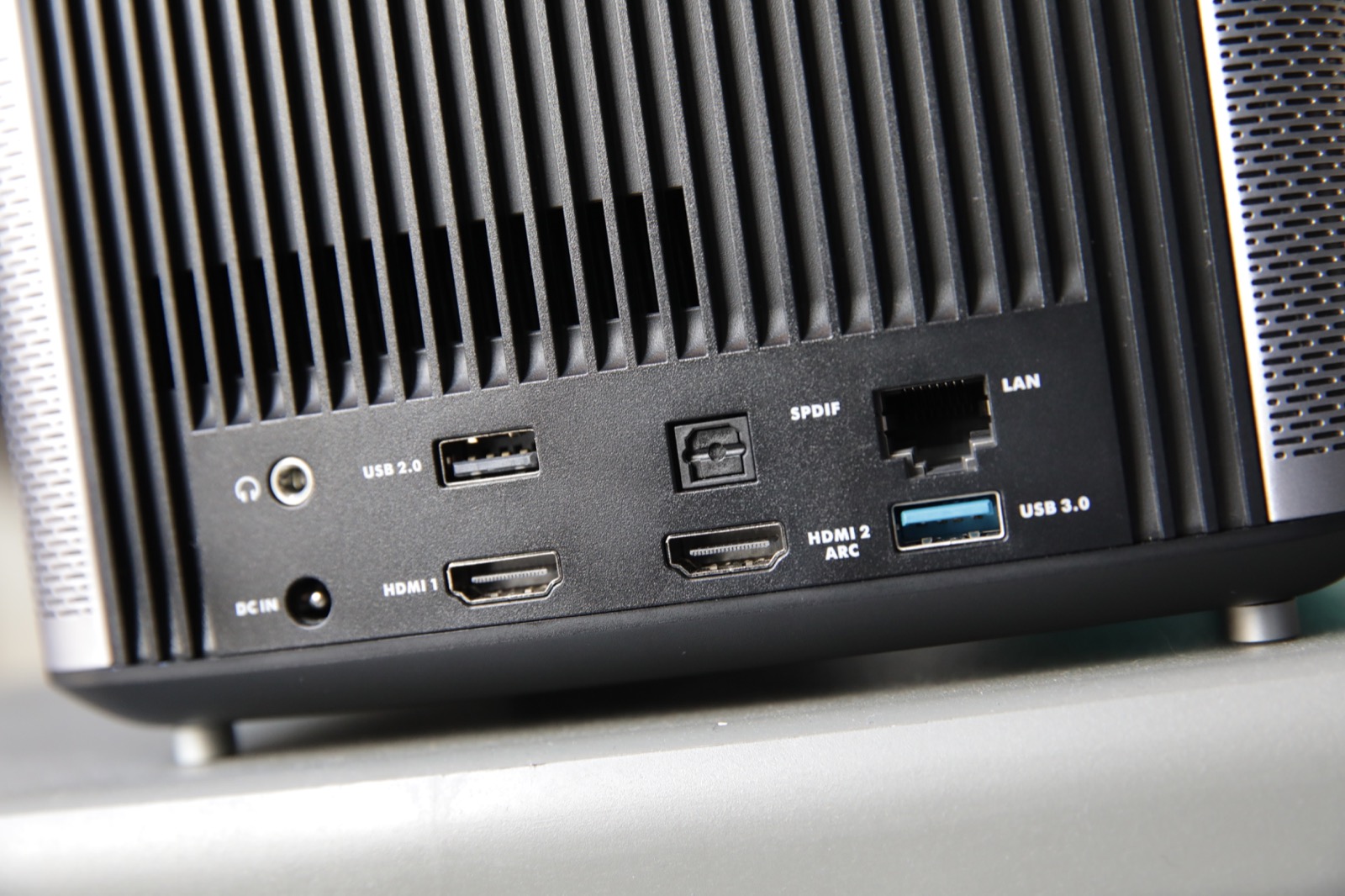 It’s sort of like having a media PC right at your fingertips, but with more out-of-the-box support for mobile games and the apps you’re suing on your smartphone typically anyway.

In addition to being itself media source, the H1 is also a standalone speaker, with Harman Kardon-branded audio. The speaker runs the length of most of the height of the projector, and its grill and the Harman Kardon branding are among the first things you’ll notice about the outside design of the H1. It’s actually very reminiscent of the look of a Sonos Play:1 speaker, which is actually a good thing because it blends seamlessly into most decor, just like the Sonos does. 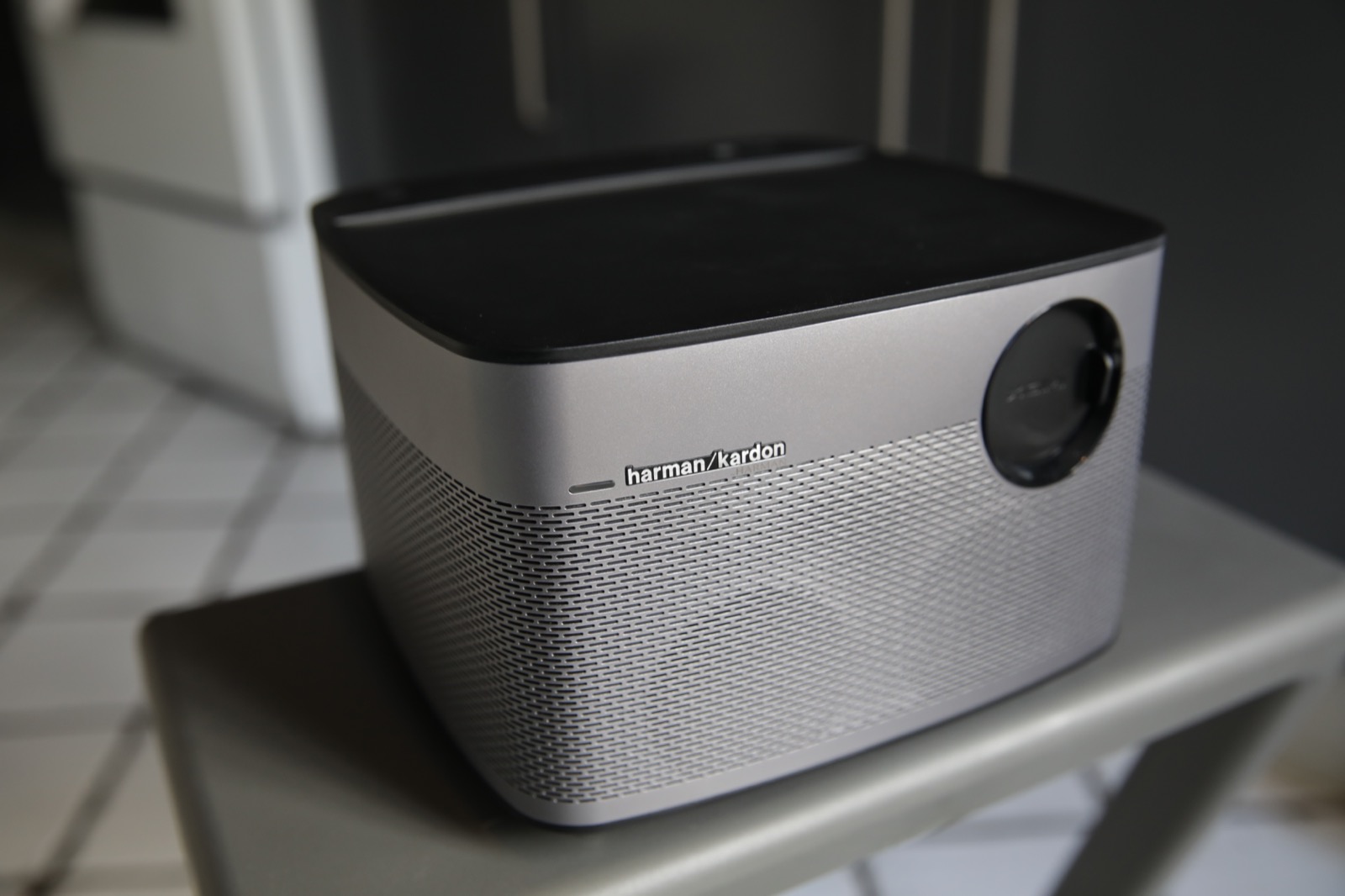 The speaker itself is pretty good, too. I wouldn’t put it quite on the level with Sonos, which manages to deliver terrific sound for its size and weight, but the H1 can definitely hold its own and offers very clear dialogue for TV and films in addition to rich music playback. It’s far better than the typical built-in speakers offered on much more expensive projectors, and it’s definitely capable enough to act as its own Bluetooth speaker for your smartphone – which it can do, with pairing as easy as it is for your average dedicated mobile sound system.

Having a capable speaker onboard is a huge reason why the H1 seems like a complete, portable package. Even your average pico projector typically requires an external sound device to be worth anything in a group setting, and yet the H1 is good for both movies and standalone tunes wherever you set it up.

Take it with you

The Xgimi H1 is a bit big in terms of devices that I’d typically classify as “portable,” but in this case the moniker definitely applies. It’s not heavy, despite its size, and it’s basically the size of a small muffin tray or a large Bluetooth speaker, both things you’d definitely pack for a friendly visit or a road trip.

Xgimi even offers a carrying case through its Indiegogo campaign, but you can probably transport it fairly easily without. And an integrated slide-over lens cover should help ease your mind in terms of damaging the optics.

The H1 is almost small enough that I’d feel comfortable packing it in a suitcase for use in hotels, but that’s a bit extreme. It’s definitely road-trip worthy, however, and paired with an external power source like a backup car battery, and a bed sheet, you could definitely use it to make yourself a mean little camp-side movie theater. 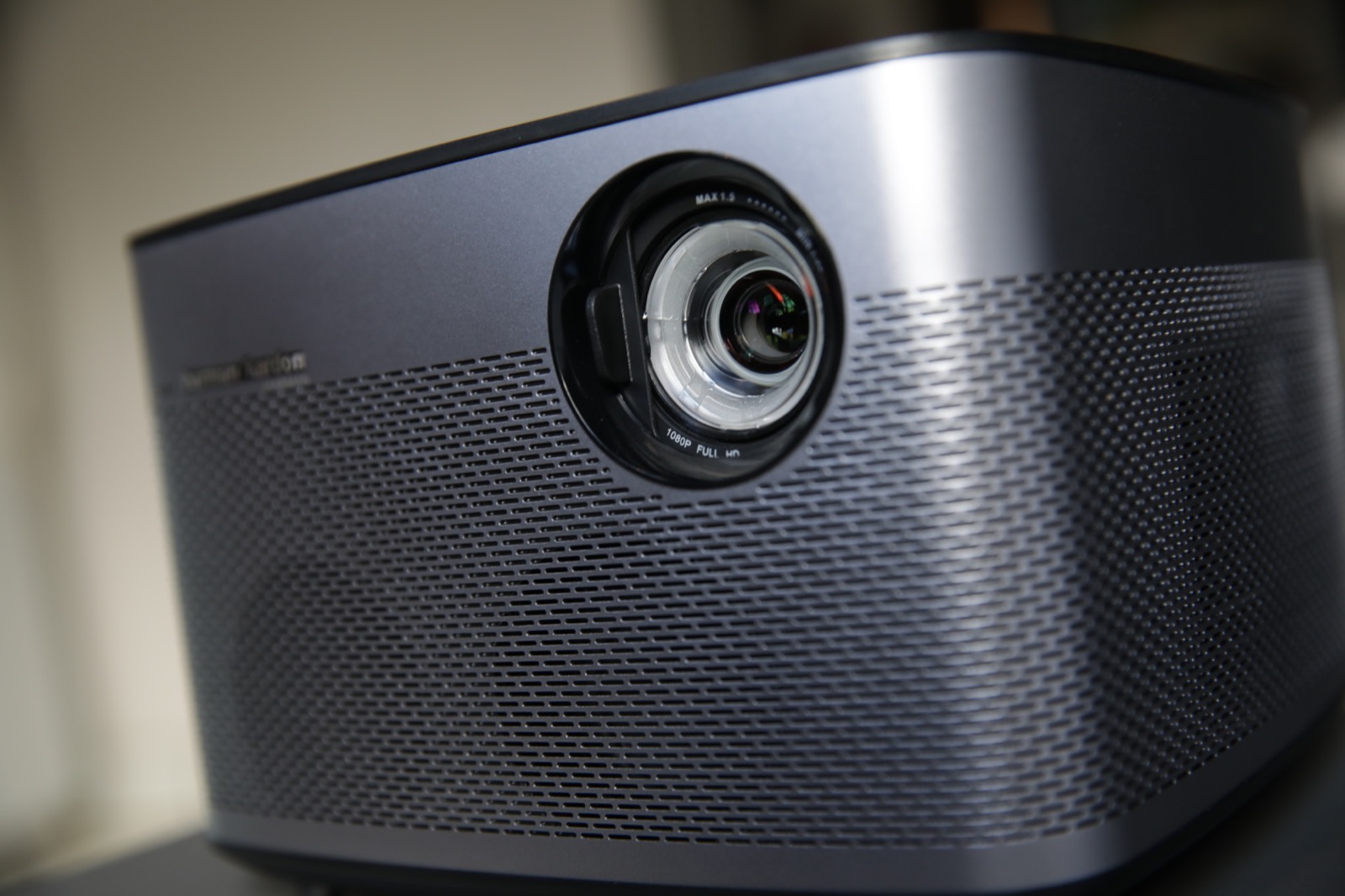 While the H1 isn’t quite as good as some of the more expensive dedicated home theater offerings from big brands like Epson and Benq when it comes to image quality, it’s a far more versatile device, with IQ that’s close enough most people probably won’t appreciate the difference. It’s important to note that while the Xgimi team uses 4K in their marketing materials, that just means it can interpret and downsample a 4K signal intelligently – output is 1080p, but it does manage that with sharp definition even at large sizes.

The choice about whether it’s right for you will probably depend on what you want to do with it; if you’re looking for a flexible, bright big screen you can use in a number of different settings, the Xgimi H1 is a great all-arounder and almost certainly your best bet at this price point.