The fourth quarter is always the busiest for e-commerce businesses, with the biggest sales and more consumers than the year prior turning to the web and mobile devices to complete their holiday shopping. This year proves no different, according to the latest holiday sales forecast, which estimates that nearly half (47%) of consumers will shop online this season, 33 percent of them from mobile devices.

The projections come from Visa, which has a stake in e-commerce through its PayPal and Apple Pay rival, Visa Checkout. The digital payments service today has over 15 million consumer accounts, hundreds of thousands of participating merchants, and support from over 1,400 financial institutions across 16 countries. 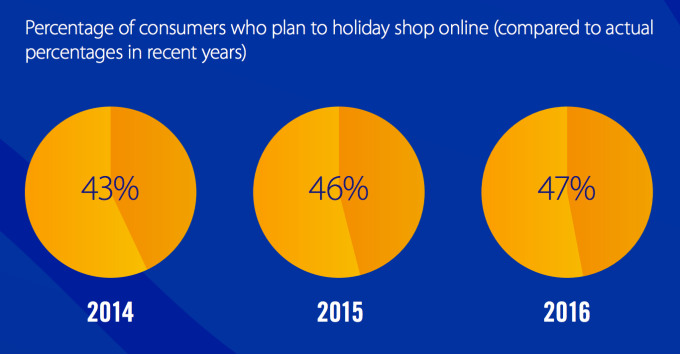 In terms of the percentage of consumers who plan to holiday shop online, as compared with actual percentages from the last two years, there’s only a small increase. With 47 percent expected this year, that’s only up one percentage point over the year prior. There was a larger jump from 2014 to 2015, from 43 percent to 46 percent, respectively.

However, in terms of the projected increase in total online spending, Visa is estimating online sales will rise by 18 percent this year, compared with the 16 percent increase in 2015. 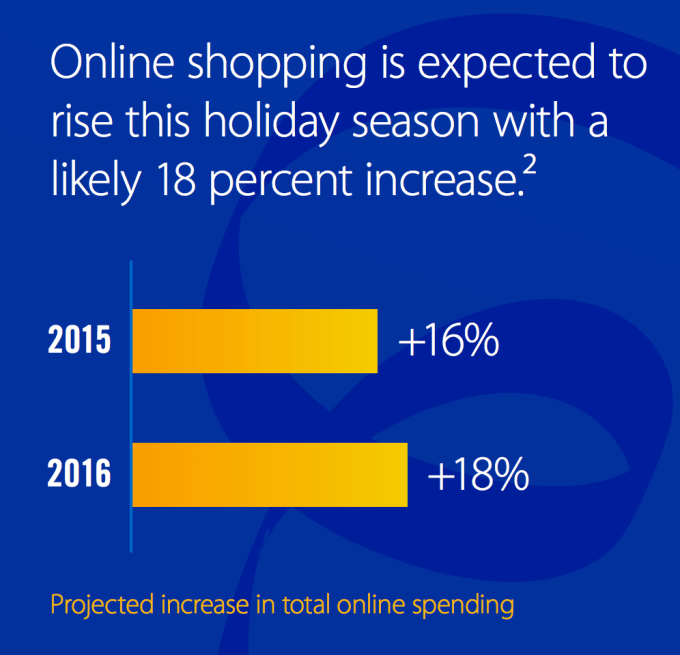 In addition, according to Visa’s consumer study, 33 percent of those shopping online will use their phones and tablets for their holiday purchases, and nearly a quarter of those consumers will be millennials – meaning those ages 18 to 34.

Visa also predicts that, as before, Cyber Monday will continue to outpace Black Friday online, while a second surge of last-minute shoppers will hit the web in mid-December. Interestingly, Visa says that Black Friday is becoming less important – last year, for example, it dropped to 13th in a ranking of the top shopping days by total payment volume (online, mobile and in-store.)

You can already see top online retailers adjusting to this trend, by starting their “Black Friday” sales well before the actual sales event. For instance, Amazon kicked off its Black Friday sales earlier than ever before this year, with sales on toys, electronics and Amazon devices that begun on November 18th. Last year, it started its holiday deals on November 20th.

In response, Walmart announced this morning that it will launch its holiday sales earlier, too, with “Cyber Week deals” that start the day after Thanksgiving, Friday, November 25th.

Also this morning, the National Retail Federation said that more than half of consumers have already started their holiday shopping, thanks in part to these early sales.

It’s worth noting that Visa’s figures are more conservative than some prior forecasts. PwC, for example, said recently that it’s expecting digital sales to increase 25 percent this season, with mobile shopping up almost 25 percent.