Pinterest today is launching a new section of the app that is geared around surfacing trending and top ideas that’ll get additional new content in front of users.

Called “Explore,” it’s a new section of Pinterest that pits its recommendation algorithms against trending content across Pinterest from publishers and other sources that’ll get content in front of users that their existing social graph might not tap into. This is something that a lot of other apps already tap into — such as Instagram’s explore and Snapchat’s discover features.

The main thing here is that, while a lot of this functionality that’s being showcased in Explore exists on Pinterest already, slotting it into a new section on the app to cultivate a new kind of user behavior that other services already tap into is a way to make the app more sticky and get more people coming back every day. While Pinterest’s user base may not be as massive as Snapchat’s or Facebook’s — or as rapidly scaling and comprehensive — it can differentiate itself with advertisers by being a platform with more engagement than those other networks.

Right now, you might consider Pinterest to be a go-to spot for recipes, clothing or DIY ideas. And, to be fair, that’s not far off — the company has collected 150 million monthly active users on the strength of the content it’s known best for. But Pinterest has increasingly tried to expand beyond that tried and true content that’s kept those users coming back over and over every day. The ability to explore additional topics that might help those users expand their overall scope of interest gives Pinterest a way to attract those users who’ll share content outside of what Pinterest is traditionally known for.

Under Explore, users first get a look at “today’s picks,” which is a set of personalized recommendations in addition to the top trending topics on Pinterest during the day based on search trends. Pinterest’s search engine is already “powered” to some extent by the overall search behavior of its user base, so driving that functionality toward an explore section makes a lot of sense — even if it’s a user behavior overlap, sticking it in a discrete section might attract a different kind of mode in a user’s daily behavior.

That also means that Pinterest can tap into topics that are particularly important during a single moment. So if a big product launches that gets popular overnight from some company, it’s sort of up to Pinterest to make sure that gets in front of users. Pinterest’s search function is already powered by the mass behavior of what its users are searching for, so it sort of makes sense for the company to direct that toward a new explore tab.

Pinterest is also launching native video within the app, where videos will auto-play in Explore. That content, like the rest of Explore, is surfaced in a mix of personalized recommendations and trending topics. Again, as a ton of mobile usage shifts over to video and automatically getting the content moving has proved to be successful on other platforms, Pinterest really needed to get a tool like this out there. It already had a variation of video content with cinematic pins — pins that essentially move as you scroll down — but as it’s started to expand more aggressively into video something like this was bound to come eventually. 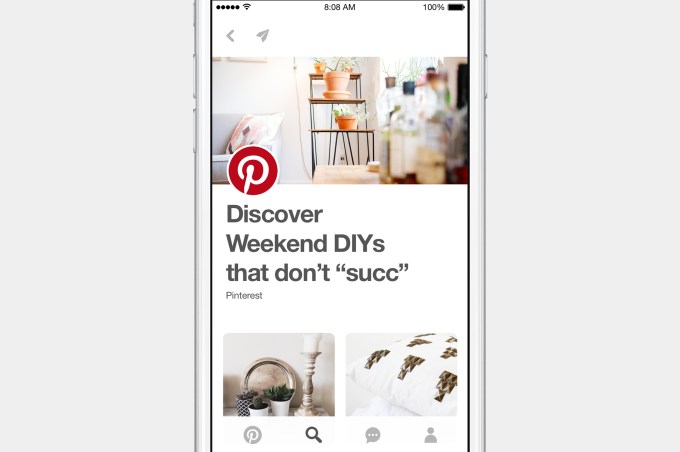 One of Pinterest’s core advantages is tapping into a moment of inspiration for a user, in which they end up diving deeper into a rabbit hole and finding a topic that they are interested in but initially just weren’t aware of. Giving users a way to actively do that as an additional mode of usage for Pinterest increases the opportunity that it may capture that moment of exploration and drive them to eventually start saving those topics and building out a more consistent daily habit.

Of course, there’s always a benefit to the company if they can nudge users into additional interests. It helps build out a more robust social graph, which gives Pinterest a better idea of what they are looking for. When that happens, it opens the universe of potential advertising topics that Pinterest can serve to the users that will be more and more accurate. The more accurate — and valuable — those ads are to Pinterest, the more likely those users are to interact with them, and the more revenue it can generate out of those ads.

And Pinterest in particular has tried to tap into additional ways to collect and drive additional people to Pinterest beyond its core user base lately. The company recently acquired Instapaper, and while it could have easily shut down the app and directed the team to existing functions, the app is still up and running — and its premium service is now free for all users. We can of course speculate on all the reasons why this might be the case, but one natural result is to get additional eyeballs under the Pinterest umbrella and potentially get them on board with the idea of sharing those stories on Pinterest and not just Instapaper.