Facebook is making it easier for users to find voting guides, registration info, news video, and other Election Day planning tools with the addition of a new “Election 2016” shortcut in the Favorites section, which directs you to Facebook’s elections hub. The shortcut, which is rolling out on both web and mobile, cannot be removed from your Favorites – it’s hard-coded.

The Elections 2016 hub, however, first appeared during the three presidential debates this year: September 26, October 9, and October 19. At the time, the company sent out notifications that directed users to the hub for discussion and video.

Now, it has gone live in the Favorites section where it will remain through Election Day. 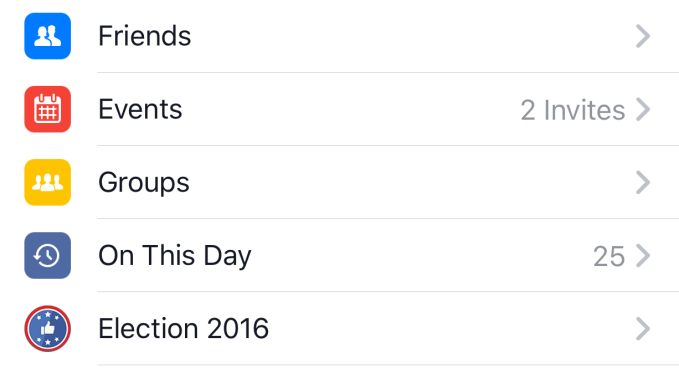 Like many other major tech companies, Facebook has been working to get users registered to vote and informed about their ballot throughout this election season.

For example, its voter registration push helped more than 2 million people become registered voters, according to Facebook COO Sheryl Sandberg. And, more recently, it launched a full voter guide that helps users learn about the candidates, their positions, and even down-ballot propositions and local politicians.

However, finding all of Facebook’s election and voting information in a single spot has been difficult. Often, Facebook builds destinations inside its social network focused on certain events – like the Olympics – or places where you can follow certain types of activities, as with its hub for live sports matches. But the company hasn’t always done a great job at putting these hubs somewhere users can easily find them.

With Election Day 2016, the subsite is getting prominent billing. It’s pinned near the top of your Favorites section on both web and mobile. (To receive the Election 2016 hub on mobile, you may need to first update your app.)

When you click through on the link, you’re taken to Facebook’s 2016 destination site, where you’ll find voting information, news and other election content. 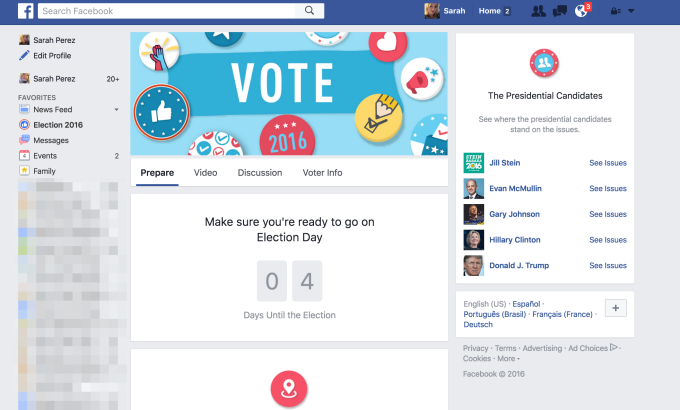 On the right is a list of the presidential candidates with links that will direct you to read more about their issues and platforms on their own Facebook Pages.

The four tabs across the top of the page will direct you to voting information, election news, videos, election-related posts, and more.

The “Prepare” tab offers polling places directions, links to Messenger to “make plans with friends to go together,” info on voter requirements, and the newly launched ballot guide. You can share “I Voted” from this page, too, after you hit the polls. 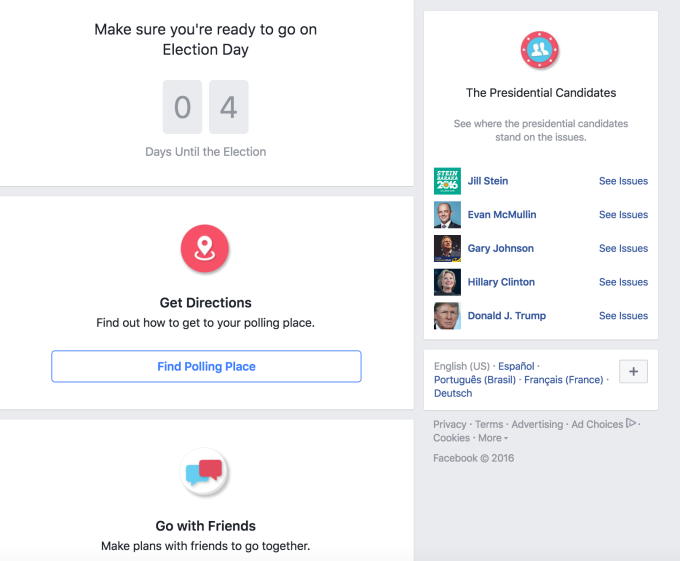 What’s interesting is that, despite its claims that it’s not a media company (funny, since it’s partnering with ABC for its Election Day live news), the Election 2016 hub also features two sections focused on offering aggregated streams of election news.

The Video tab, for instance, directs you to the top and most recent Facebook Live videos related to the election. The Discussion tab is merely a stream of all the content hashtagged with election terms, like #election2016, #election, #vote, #USelection, etc.

These streams are not representative of what the most important election news of the day is, however – one promotes only Facebook Live videos, while the other is filled with random content -including some non-English language content – that carries some sort of election hashtag.

This is an area where Facebook could have better capitalized on its Trends feature, had it not fired its news editors and left figuring out what news matters to its algorithms.

In addition to the Election 2016 hub, Facebook will also send out Election Day reminders – something it has done since 2008. These will point to the hub for information on polling locations, what to take, and the voter guide, among other things.