It seems that after about nine months of irrational exuberance followed by roughly six months of equally as irrational disconsolation, venture investors have gotten their groove back.

At least that’s the conclusion lawyers from Cooley LLP are drawing from their latest analysis of the state of the venture market these days.

The firm’s latest report illustrates that (barring a few BIG outliers — identified by the spike in late stage funding in the chart below), venture investments are coming down from their 2015 trend lines. 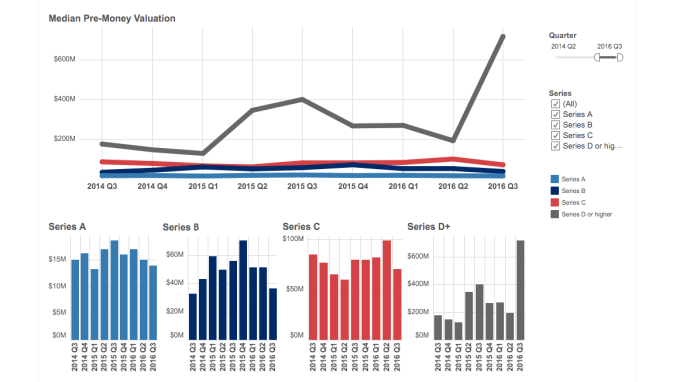 Yaghmaie attributes the stabilization in part to a retrenchment on the part of later stage investors who have by-and-large left venture investing after coming in and wreaking all kinds of havoc last year.

“The conventional wisdom was that the influx of capital by largely valuation agnostic participants was driving up the valuation math — which has a trickle-down effect,” Yaghmaie said. “It trickles down and pulls everything up gravitationally. Prices just go up across the board.”

So early-stage venture backed companies were raising large amounts of cash on the back of later stage investment rounds that were themselves being inflated by an overly enthusiastic public market which was gobbling up tech stocks.

Once the music stopped in public markets, and investors either retreated to safer types of investments than technology companies or woke up to the over-inflated valuations of those companies relative to their short-term growth prospects, the public market declines impacted private market valuations.

Last call for the exuberance of 2015 really came with the revaluation of Fidelity Investments private company portfolio just about a year ago. Dan Primack (gonna miss you over at Fortune, fella) had a great explainer on the impact Fidelity’s moves could (and did) have on the private markets for tech stocks.

However, as Cooley’s new data indicates, things seem to have bounced back.

The firm’s deal breakdown by series indicates a healthy number of Series A, B, and C-stage deals, which all point to a market that’s operating just as it should and firing on all cylinders, according to Yaghmaie.

The Cooley partner also dismissed that large spike in late stage funding as the result of a few monster deals that hadn’t been disclosed yet, but were skewing the numbers (a few later stage companies — the likes of Uber, Snap, Lyft, Airbnb, WeWork, etc. — must have raised ridiculous amounts of money).

However, while things may be rational now, there’s no guarantee that it will stay that way. The window for public offerings and exits seems to be opening again, which could push valuations on the private side up again — and could bring back the investors that moved away from the pre-IPO investment rounds earlier in the year.

There’re also a number of companies who may be facing slowing growth (and reduced expectations for exits) that are still sitting on large cash piles. Those companies may have enough in their vaults to work through the hiccoughs in their current business models and provide healthy exits for investors, which will reinvigorate investors to start chasing riskier (or stupider) deals.

“As the market opens — and all of our expectations are that the tech IPO window will be open in 2017 — you will have greater visibility toward public valuations which will reset valuations in the private setting,” says Yaghmaie.

The Cooley partner thinks that 2017 will see a significant thinning of the unicorn herd as some companies are forced to run through the IPO window will see their horns knocked off — if they can even get through (yeah, the analogy is a bit forced, but work with me).

Still, Yaghmaie doesn’t predict a unicorn bloodbath. “A lot of these companies have raised enough capital to continue to sit out the public market until they reach an inflection point where their internal metrics support the public company valuation they want to see,” he said.

Basically, the late-stage investors that came in and poured good money after bad may have been stupid, but their plan may just be stupid enough to work. At least insofar as they can foist what are pretty shabby bets onto a public market primed to receive them, and make enough cash on the offerings so they don’t look completely dumb.

Mind you these are my words, not Yaghmaie’s.

He says, “many of these companies have the runway and the balance sheet to execute to the metrics that the public markets will require in order to pay the prices they need to command to continue to support the valuation that they’ve raised at.”