With Twitter’s future still in question following failed attempts at finding an acquirer and the recently announced layoffs of nine percent of its workforce, the company today announced it’s shutting down its standalone short-form video app, Vine. According a post, nothing is changing immediately — the website and apps will remain online for the time being, and users will be given a chance to download their Vine videos ahead of its official closure.

The announcement was devoid of any explanations about what led to the decision, only stating that Twitter would share more news on its blog and via its official Twitter account in the future regarding what comes next.

While the plan is to wind down Vine’s operations, Twitter also says the website will remain online because the company thinks “it’s important to still be able to watch all the incredible Vines that have been made.”

However, it’s unclear at this time how long the site will live on, given Twitter’s plans.

In recent days, Twitter has been focusing more on its Periscope product and live streaming rather than the short looping video service Vine, which is home now to a number of creators. It even integrated live streaming into the service, offering to alert users when someone you follow goes live. It has also focused heavily on live TV, via partnerships to stream televised content with organizations like the NFL, Bloomberg and others.

The team had already had a spate of departures and all three co-founders previously left. And it seems there’s still some frustration about the way Twitter has handled the product.

Acquired by Twitter in 2012, Vine started off strong, becoming the No. 1 app on the iTunes App Store only six months after joining the company. At one point, Vine had more than 200 million active users, yet it struggled to maintain traction and saw a decline in popularity in recent months. 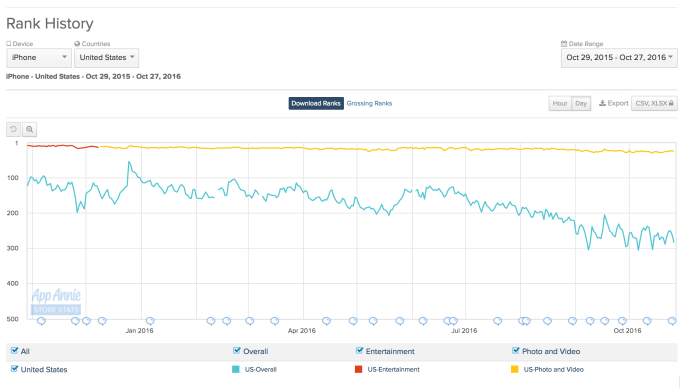 Competition from Instagram, Snapchat and YouTube made it difficult to stand out from the pack. According to data from App Annie, Vine has since dropped to No. 284 in the top charts for free applications on iOS, down from the low 100s at the beginning of the year. It’s still fairly well-ranked (No. 24) in the Photo & Video category, but hasn’t placed on the Entertainment apps top charts since 2015.

Year-over-year worldwide downloads of the Vine app declined 55 percent in Q3 across both the Apple App Store and Google Play, according to Sensor Tower’s data.

This is just the latest social media app to throw in the towel. Selfie app Shots, recently rebranded as Shots Studios and is looking to create YouTube content with former Vine stars.