Content is consumed from the big screen in the corner and you’re probably on your smartphone morning, noon and night. Cramming itself into the gap in-between is Loop, a retro-looking device aimed at a generation that hasn’t quite embraced the clutch-your-device-at-all-times world quite yet. Loop makes communicating, playing media and looking stuff up easier when you have your hands full. 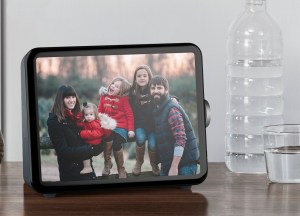 With four hours of battery life, Loop can travel all around the house

The device is a communications-focused screen designed to be portable and usable around the house. It has a couple of smart tricks up its sleeve, including far more powerful speakers than you would typically find on a tablet, voice and gesture control to facilitate hands-free control and easy streaming from GoPro and YouTube. The easy-to-clean control-dial on the side makes it easy to skip forward and back in content, so it remains easy to browse content. Smart stuff.

The problem the company is trying to solve is focused on trying to get people to interact with each other more, rather than being nose-down in their smartphones. Recognizing that the kitchen continues to be the hub of the home, Loop is inspired by the kitchen TV, but multiplies the utility of a hot-room goggle-box with the flexibility of a tablet. 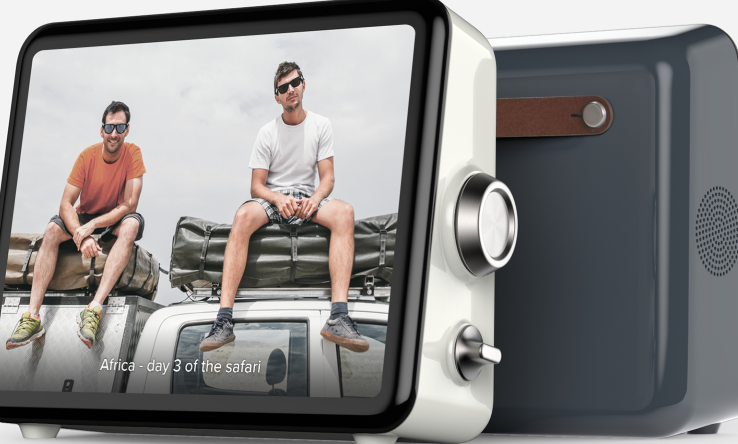 Embracing the idea of connectivity, Loop comes with an app that makes it possible to share photos and videos directly from a smartphone to the device. In practice, Loop is a bit like a hyper-personal social network aimed at keeping your parents and grandparents in the loop, introducing more of a push-based content distribution paradigm. In addition to beaming your images and videos to Loop, the device has built-in easy-to-use video conferencing.

“Take a photo of the grandkids on the beach and push the images directly to grandma’s kitchen counter,” seems to be the product’s core use case — which makes an awful lot of sense in a world where a majority of the current generation of grandparents are still on rocky ground, technologically.

The device has a strap on the back to make it easy to move from room to room. It’s designed to be used when plugged in most of the time, but does have a built-in battery so you can put it in another room for up to 4 hours without having to be hooked back up to the wall.

With a 9.7″ screen sporting a 1024×768 pixel resolution it doesn’t hold a candle to the iPad’s Retina displays, which seems like a shame (going back to a non-Retina display after you’ve gotten used to super-crisp text and images is pretty jarring), but in Loop’s defense, its target audience may not care, prioritizing ease of use over razor-sharp visuals.

Loop is an alumnus of the Highway1 hardware accelerator in San Francisco. The product is available for purchase now, with a $199 price tag and discounts if you buy more than one unit.