Maybe not everyone is convinced they need a smartwatch? According to a new industry report from IDC out this morning, smartwatch shipments experienced “significant” declines in the third quarter, as total shipments were down 51.6 percent from the same time last year. Just 2.7 million units were shipped in Q3 2016 versus 5.6 million in Q3 2015. While IDC offers several explanations as to why sales are dropping – including issues related to launch timings, Android Wear delays, and more – the numbers still indicate how smartwatches are having a hard time finding traction among a majority of consumers.

Of course, we need to keep in mind that Apple Watch is the market leader among smartwatches – its Series One device accounted for the majority of shipments in the quarter (1.1 million units shipped, a 72 percent year-over-year decline). That means its ups and downs will have an outsize impact on the industry’s numbers at large.

For starters, IDC points out that the third quarter of last year was the first time the Apple Watch had widespread retail availability following its limited online launch. That could have helped boost its sales.

Meanwhile, thanks to news leaks and reports, many consumers knew that the second generation of the Apple Watch was going to be announced in September. Those in the market for Apple’s wearable probably held off on buying until the new device arrived. And the watch was only available during the last two weeks of September, IDC says. 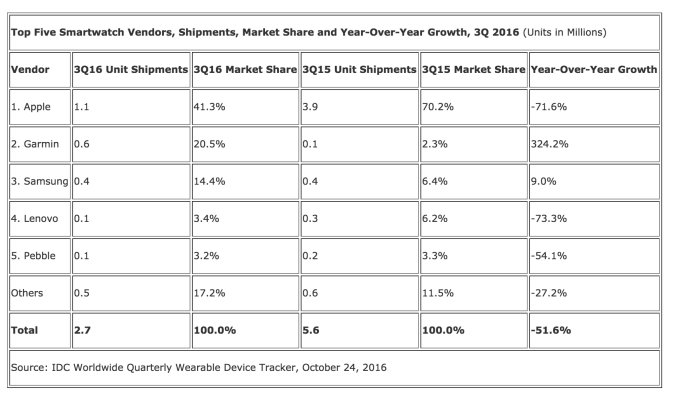 In other words, we haven’t yet seen the impact of the new Apple Watch on the larger smartwatch market. The upgraded device is now water-resistant, which could broaden its appeal. And Apple made a number of improvements to address earlier complaints about its wearable, ranging from faster app launches to a redesigned interface to the addition of GPS, among other things.

And with holiday shopping season now approaching, it’s possible Apple Watch sales will rebound in the fourth quarter, as many will buy the new device for gifts.

In addition, Google’s decision to hold back on Android Wear 2.0 has also come into play here. Vendors are having to decide between launching new devices for the holidays, or trying to satisfy consumers with those running the older OS. IDC also points out that Samsung’s Gear S3, announced in September, hasn’t yet been released.

Though there’s still room for Apple Watch Series 2 to help these smartwatch numbers improve, IDC’s conclusion is that these devices are failing to catch on with a large number of consumers.

“It has also become evident that at present smartwatches are not for everyone,” said Jitesh Ubrani senior research analyst for IDC Mobile Device Trackers. “Having a clear purpose and use case is paramount, hence many vendors are focusing on fitness due to its simplicity. However, moving forward, differentiating the experience of a smartwatch from the smartphone will be key and we’re starting to see early signs of this as cellular integration is rising and as the commercial audience begins to pilot these devices.”