Drones and pilots legally permitted to fly them are here in spades. So American businesses are scrambling to figure out how to use drones to gain a competitive advantage.

Recent examples saw Travelers Insurance using drones to inspect properties after Hurricane Matthew, and Hahn Estate Winery using drones to monitor the health and density of vegetation on their vineyards, and forensic researchers have used drones to find buried bodies.

Now, Hangar Technology, an Austin, Texas startup, has raised $6.5 million for technology that lets corporations get all the business intelligence they want out of drones, without having to pilot them, or crunch the billions of data points that they generate.

A firm that was early to invest in drone tech, Lux Capital, led the investment joined by mobility-focused Fontinalis Partners.

Hangar’s co-founders are no strangers to the drone industry or enterprise software.

Hangar President Colin Guinn was the CEO and founder of DJI North America, and CIO of DJI Innovations. He more recently worked at 3D Robotics as its Chief Revenue Officer, until the company pivoted away from consumer hardware.

And Hangar Chief Executive Officer, Jeff DeCoux, previously founded and was CEO of several enterprise tech companies including an early maker of customer relationship management software, SMART Technologies, which was acquired by i2 Technologies in a stock deal originally valued at $68 million in 1999, which reportedly ballooned to be worth over $1 billion, following the merger. 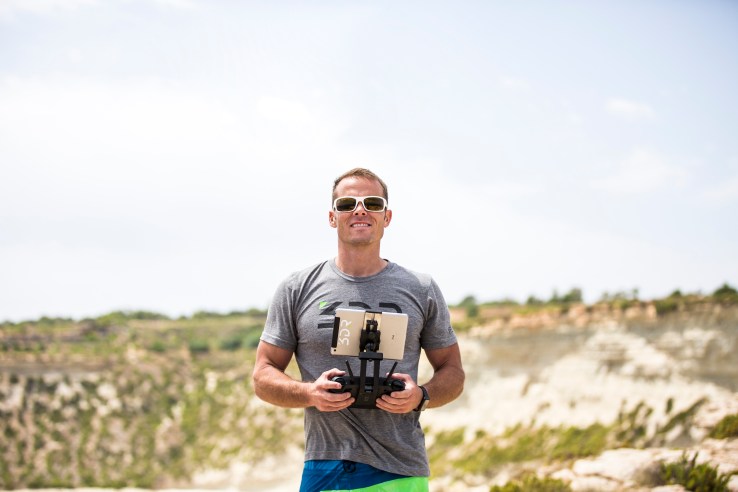 Guinn said, “There’s already so much incredible drone hardware and software out there. We want to help enterprises around the world to easily acquire aerial data. And we want to help people who are drone owners and operators to get out and do more of what they love. They may not love business development and sales as much as flying their drones.”

Several startups promise to give individuals or businesses an easy way to find and book a drone pilot for a given job. Marketplaces like DroneBase, Droners.io, Dronelancer, or the Drone Mapping Directory recently launched by DroneDeploy, are a few options.

But what Hangar is proposing is decidedly higher-tech.

According to Lux Capital’s Bilal Zuberi, “Hangar is not a services business, or another pure marketplace play. They are building a software platform to automate aerial data acquisition as well as analysis for multiple commercial and industrial verticals.

Commercial drone operations today are mostly manual in nature, from mission design and planning to flight control and data analysis. Hangar automates all of this, enabling rapid scalability without needing expert pilots and drone operations managers.”

The idea is that collecting and analyzing drone data for commercial uses would be as simple as showing up to a location with the properly equipped drone, and pressing one button on an app to complete a job in full.

Made to order maps, graphs, photos or videos would simply show up in a Hangar client’s inbox or data gathered by drones would populate a company’s designated systems, with little effort on their part.

Hangar has been testing an early version of its software and platform in a private beta with commercial drone pilots and construction and real estate businesses in Austin, Texas, Guinn said.

Construction companies use Hangar to survey land where they may develop a building, and to track progress made on a given site. Doing so helps with everything from accounting to scheduling delivery of supplies there.

Hangar, which employs 30 full-time today, expects to use its funding for hiring, strategic acquisitions, research and product development, Guinn said.

Zuberi expects the sizable seed investment should last Hangar 18 to 24 months. Investors and executives believe that Hangar may find an advantage in its Austin location as cost of living is lower there than in other tech hubs, but tech talent is still abundant.

Even though the company was only founded this year, Hangar is already revenue- and profit-generating.