Facebook’s Instant Articles — the format that displays publishers’ content in a faster-loading, distraction-free view when accessed by Facebook users on mobile devices — are about to get more interactive. The social network announced today that these articles will now support 360 videos and photos — meaning, publishers can include 360 content in-line, which users can then navigate by turning their mobile device, or tapping and dragging.

360 videos were launched last year on Facebook’s News Feed, and 360 photos arrived this June. Both technologies offer a different way of exploring a scene in a more immersive way, on both mobile and web. Since then, these have been popping up across users’ feeds, offering VR-like experiences where you can tilt and rotate your mobile phone to see more of the action, or click and drag the scene when on the desktop web.

Already, 360 photos and videos have been adopted by major publishers and news media to enhance their reporting and other shared content. For example, NBC’s Saturday Night Live and millennial-focused news organization VICE were among the first to roll out 360 videos, while publishers like The New York Times along with space agency NASA launched some of the first 360 photos.

Now, Facebook will allow journalists and other content creators to include 360 videos and photos directly in their Instant Articles as inline content. When a user sees the media in the story, they can immediately begin interacting with the photo or video by tilting, clicking or dragging.

The USA Today Network and BILD have already been testing these additions in their own Instant Articles, ahead of today’s formal launch, Facebook notes. The former combined a voice-over by Ken Burns with a 360 video to create a narrated tour of the U.S. National Parks, while BILD used the videos in an article that offered a tour of the USS Harry S. Truman vessel, says Facebook. 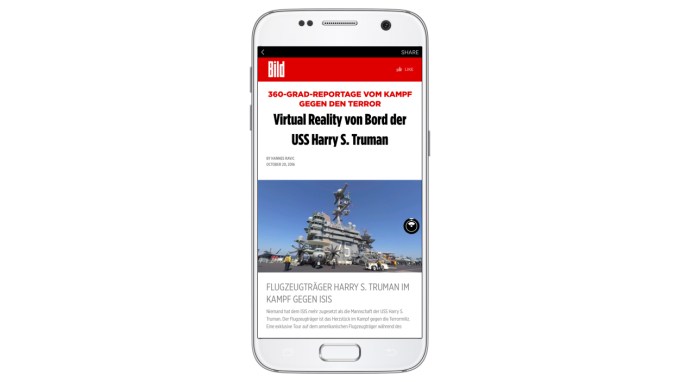 You can view either of these examples for yourself, by searching for Instant Articles on your smartphone, heading to the Instant Articles Verified Page in the search results, then locating the stories from the publishers.

As news articles push toward more multimedia and high-bandwidth media, support for 360 photos and videos in fast-loading Instant Articles may make the format more attractive to publishers.

But on the flip side, it raises questions about how publishers should handle including this content for those readers who access their site in a standard web browser, off of Facebook’s network. It seems that Instant Articles will now have better technology behind them than the publisher’s traditional CMS. That could get messy, as a publisher might reference the 360 photo in their post, but that photo doesn’t appear correctly for all their site visitors.

Publishers may be able to embed the 360 photo or video from elsewhere on Facebook into the post, but then there’s a question of whether or not that content could slow down their regular website or mobile site.

Of course, slowness wouldn’t be an issue for the Instant Articles that appear on Facebook, but despite the fact that many people today get their news on Facebook (for better or for worse), publishers still have a responsibility to make sure their site performs well and is usable by a wider audience.