Despite murmurs of tumult and slowdown in the Chinese economy, the fact remains that China’s economic engine has been on a tear — at roughly 6.5 percent or more for the last six years. Much of this growth has been fueled by China’s emergent tech industry, as even in Silicon Valley, China’s BAT companies (Baidu, Alibaba, Tencent) and hot startup scene have become part of everyday conversation.

According to Harvard Business Review, human capital has accounted for 11-15 percent of China’s GDP growth, and the supply of qualified employees is having a hard time meeting the market demand and growth. This has resulted in high turnover in human capital as companies try to outbid each other for the best talent. For starters, a 20-30 percent increase in compensation package is considered the norm in China. However, there is much more depth to this phenomenon, so let’s examine it further.

Talent moving into big cities for employment opportunities has been a classic global phenomenon — especially in times of growth — and a persistent trend in China during recent years. However, surprisingly, we are now starting to see an exodus from the Tier 1 cities in China (such as Beijing, Shanghai, Shenzhen). Higher standards of living in these cities have become an issue for younger employees (the same has been observed in Silicon Valley).

Let’s take Beijing, not just China’s capital, but the most preeminent internet hub, as an example: Monthly rent for a one-bedroom apartment is approximately RMB¥2,300-5,000 ($340-750 at recent exchange rates) outside of the city and RMB¥5,000-9,000 ($750-$1,300) in the city center. Moreover, prices for housing and rentals have been rising at 16 percent and 12 percent, respectively, annually. These numbers may not seem impressive when compared to rent in Silicon Valley, but they’re not so easy to stomach when you take into account Chinese salaries.

Indeed, many eager young employees who came to Tier 1 cities in search of work and opportunity have returned home in search of alternatives. As a result, employers in Tier 2 or 3 cities are benefiting from the new surge in talent. Tech companies and startups outside of Tier 1 cities may see an advantage in terms of cost-effectiveness and margins when compared with their counterparts in Beijing and Shanghai.

Many large tech companies have their own internal hierarchies and promotion tracks. These myriad combinations of letters and numbers can often be arcane and confusing to potential employees. Below, I show a comparison between equivalent levels at the Chinese BAT tech giants, and some U.S. counterparts — Microsoft and Amazon. 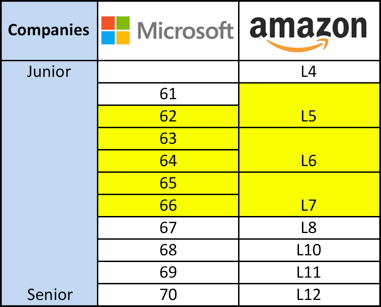 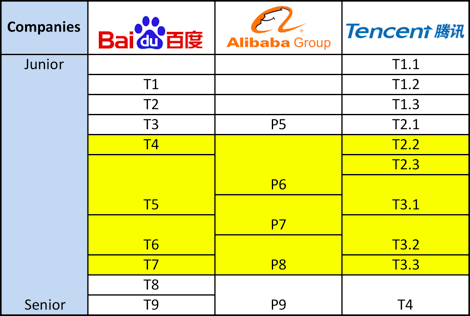 Most of the talent traffic happens in the mid-levels — Baidu’s scale between T4 and T7 and in Microsoft’s scale between 62 and 65. These levels are also chiefly responsible for driving up market standards for compensation packages. If an employee jumps ship from a foreign company like Microsoft, Google or Amazon to a local Chinese employer, it’s possible to negotiate for up to two additional levels of seniority, including compensation. However, this does not apply in reverse. And while U.S. companies in general follow the seniority level limits, compensation ranges for the local Chinese companies are not posted because there are simply too many exceptions.

A key note for Westerners interested in China: For foreigners, the term “expatriate package” is becoming rarer in China. Local pay is the way to go and has become widely accepted, even when relocation to China is required.

For more in-depth data, I refer you to the following article: China Draws Executives from Silicon Valley.

OK, good to know all the phenomena mentioned above. What if I am in the job market or hiring there? Here are a few tips for you. The turnover rate for talent in China has become quite high, even when compared to Silicon Valley. It is not surprising to find candidates switching jobs every one or two years, especially for the most competitive talent.

In addition to salary, corporate titles are considered an important bargaining chip during employment negotiations, and there is a tendency to see higher titles in Chinese local companies compared to foreign companies in China. For example, a Senior Manager in Amazon can be treated as the equivalent of a Director position in Baidu — an important note to keep in mind when recruiting or conducting business with Chinese companies.

Below is a table of popular online recruiting tools in China, with information that may help you find the right candidate at the right platform. Some sites provide their own recruiting services, like hiring consultancies, so popular candidates may be hidden even when subscription to these sites are in place. Yes, this can happen!

What you see here is just a snapshot of today’s Chinese tech industry, but the human capital market in China is continuing to transform quickly! Many of these statistics and trends will shift in the next couple of years, but it’s important to understand some of the challenges faced by companies in China required to spur their aggressive growth. As has been a common trend in China, swift adaption will be the key to stay ahead in the market.