It’s a funny thing: Smartwatches are supposed to be the more accessible alternative to your smartphone, but you can operate a phone with one hand, while the watch takes two. Luckily, Dartmouth researchers are on the case, and have engineered a way to use your wrist as a sort of joystick, allowing you to use your smartwatch one-handed.

It’s a very hacky project; this isn’t some custom app running on an Apple Watch. Xing-Dong Yang and his colleagues built their own smartwatch with a 2″ display, a wristband and a dozen infrared proximity sensors. The WristWhirl prototype is literally duct-taped together. 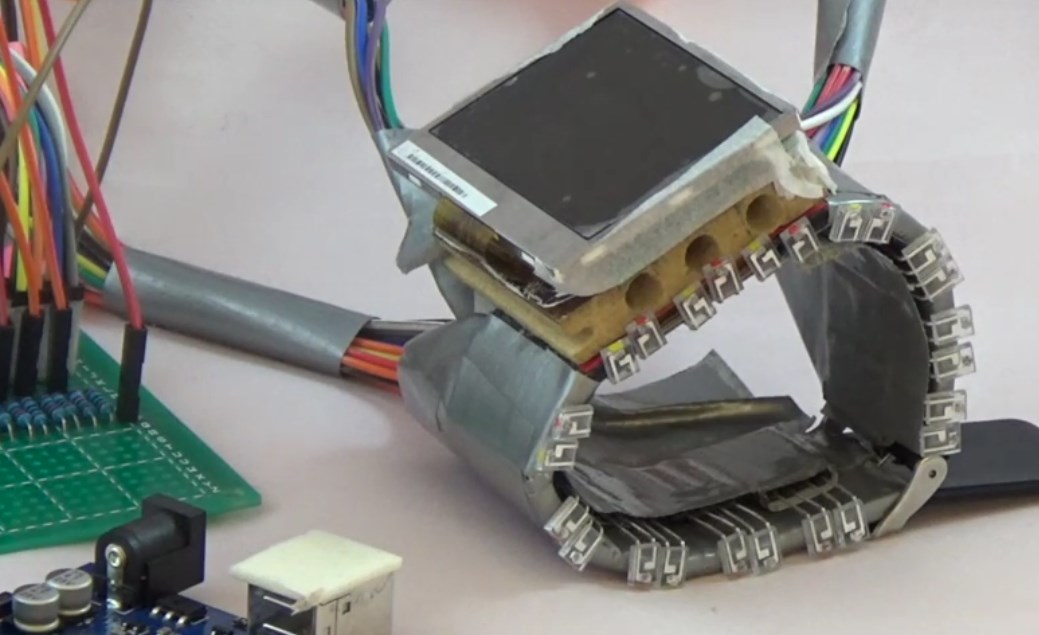 The proximity sensors monitor how far away the bits of your hand are, collating that information into a larger picture of the position of your wrist. This data is sent instantly to the watch, where it drives a virtual cursor. Tilting your hand down moves the cursor down, and so on.

Tilt in a pattern to launch or switch apps, scroll up and down and play games, all without using that second hand of yours. And it only detects gestures when you want it to: another sensor detects the sound made when you tap your thumb and index finger together (!), which turns the recognition software on and off.

There are already gyros and accelerometers in smart watches, but having to move the watch around when you want to zoom in on a map seems pretty weak, especially once you’ve seen WristWhirl in action.

Will you look insane flipping your wrist around while staring at your watch? Yes. But onlookers will soon know the convenience of this form of input and it will become mainstream. Remember how we used to look at people talking into Bluetooth headsets? (Actually, we still look at them that way.)

Now, I don’t think anyone was really hurting for lack of being able to use their smartwatch while carrying groceries (shades of Everything is Terrible in the video) — but this is still a clever solution. Of course, the thing looks like a bomb at present, so it’s not quite ready for deployment.

“Our plan is to build a self-contained version using an Apple Watch,” wrote Yang in an email to TechCrunch. “This way we can test the idea in a more realistic setting.”

Developers would have a field day. It’s very futuristic.

Yong and his co-author, Jun Gong, will be presenting their work at the ACM Symposium on User Interface Software and Technology next week. You can read their paper here.