It’s important for tech companies to have at least one voice at the senior leadership table that advocates for issues around equality, diversity and inclusion. Unfortunately, that’s just not the case for many companies in the tech industry. Salesforce, a company that said a year ago that a major focus for it was “the women’s issue,” recently became an exception to the rule with the hiring of Tony Prophet, its first-ever chief equality officer. Two weeks into his role, Prophet sat down with me to chat about Salesforce’s evolution from a focus on diversity and inclusion to an overall focus on equality.

“The notion of being chief equality officer — now that was very thoughtful and deliberate on Salesforce’s part and on Marc’s [Benioff] part versus being chief of diversity or chief of inclusion because you can have a diverse workplace or a diverse culture in many parts of America that are very diverse but are hardly inclusive and there’s hardly equality,” Prophet told me. “We want to go beyond diversity and beyond inclusion to really achieve equality.”

As the company’s first head of equality, Prophet has the flexibility to design parts of his role. Ultimately, he sees himself as being an advocate for issues pertaining to equality, including equal pay, equal advancement, equal opportunity and equal rights, Prophet told me.

“Equality goes on top of having a diverse workforce and inclusive workforce,” Prophet said. “So [the role] needs to be built on a foundation of making sure we look like the communities in which we operate. We have work to do there, as does the whole tech industry, in ensuring that all feel welcome and their voices heard, and they feel respected and they can bring their authentic selves to work every day, and give their very best.”

As Prophet noted, Salesforce does have a lot of work to do. Salesforce’s diversity numbers fall in line with the average Silicon Valley tech company, with a workforce that is 70 percent male, 67 percent white, 4 percent hispanic and 2 percent black, according to Salesforce’s August 2015 report. 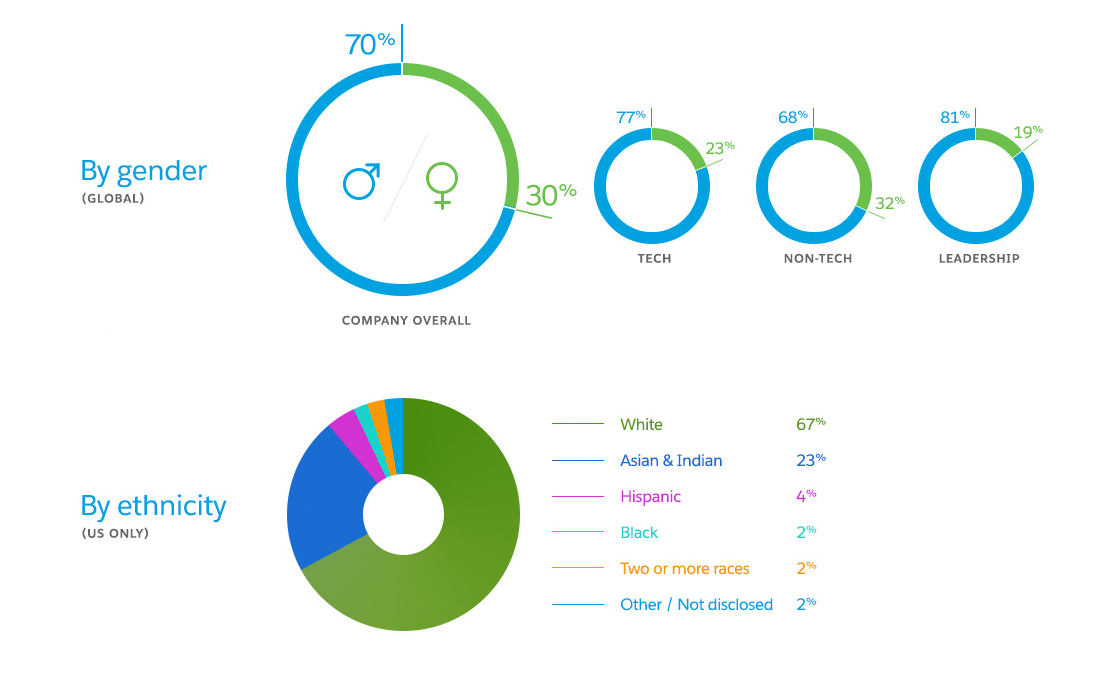 As some people have said in the past, efforts around diversity and inclusion need to start at the top. What’s notable about Prophet’s role is that he’s in the C-suite and has the ear of the other CEO, chief executive officer Marc Benioff, which is pretty rare in the realm of diversity and inclusion. Typically, leaders in those roles fall under the human resources department. On average, Prophet is in touch with Benioff once a day and expects to have one-on-one, face-to-face check-ins with him a couple of times a month.

As the chief of equality, Prophet oversees efforts around diversity and inclusion, so he also has a tight connection with those on the human resources team. Prophet will have his own team, which won’t fully form until February. He says that it won’t be too big in size because he doesn’t think “building a very large team sends the right signals.”

Instead, Prophet’s equality team will partner with some of the people from the system that’s already in place. Salesforce, for example, already has a recruiting program called Future Force that focuses on college campuses.

“Recruiting is absolutely essential,” Prophet said. “You can’t get into a position of equality if you don’t have a broadly diverse organization.”

Just like Salesforce is deliberate about the phrasing of the title and role Prophet now holds, Salesforce is also deliberate in the way it refers to its efforts around diversity and inclusion, which it does not refer to as affirmative action.

“We’re really focused on having a diverse workforce that over time represents the communities where we operate and an inclusive environment and then really striving for real equality in the workplace and in the community,” Prophet said. “That’s really the vocabulary that we’re locking in on, so people are really precise and focused and aren’t connecting it to any things that have past associations that you don’t need to define or explain. With those things in the past, there’s so much baggage and they’re shorthand for things that you can’t unpack what’s in someone’s mind when they hear those words. First thing, we’re about diversity, inclusion and equality.”