Unscrupulous scammers have been pilfering money out of charity donation boxes for as long as they have existed. The rapid rise of crowdfunding platforms has moved this practice into cyberspace. GoFundMe today announced that it is fighting back with a limited guarantee, ensuring that the money you drop in a collection bucket goes where you think it does. 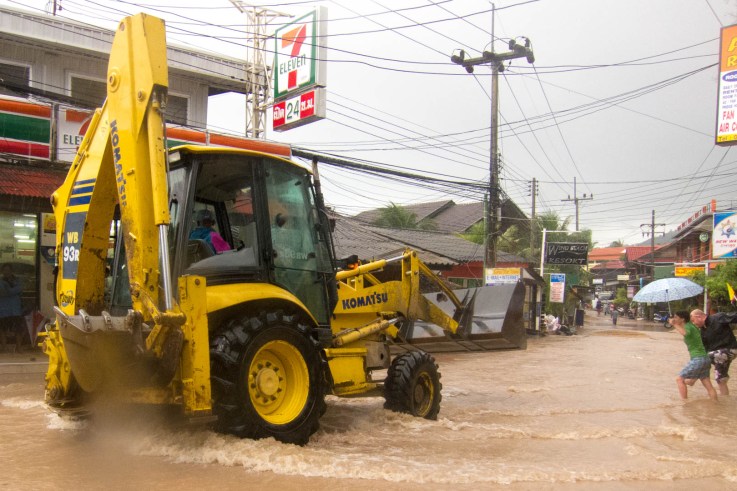 Severe natural disasters — like flooding, in this case — bring out the best and the worst in people.

Fraud does happen on platforms such as Indiegogo and Kickstarter, but given that backers on product-driven crowdfunding platforms usually expect to get a product in return (even though it may not always be the product they expect), it eventually becomes obvious when fraud has occurred. This isn’t the case for platforms aiming at cause- and charity-based giving, such as GoFundMe, where a donor’s involvement with a campaign often ends as soon as the donation is made.

Between the ease of setting up a campaign, the difficulty of detecting fraud and the ability to set up campaigns on someone else’s behalf, rooting out fraud on online donation sites can be tremendously complicated. It is against this backdrop that GoFundMe is adding a second layer of defense, in the form of a guarantee to its donors and recipients.

The guarantee is limited in a few important ways, which I believe weakens the company’s commitment to tidying up its image.

In the aftermath of a natural disaster, a number of funding campaigns tend to pop up. After the recent flooding in Louisiana, for example, the Louisiana Record reported that more than 6,400 campaigns were launched, causing the state’s Attorney General to pay extra close attention.

Let’s be clear: Most of the campaigns on the platform are created with good intentions and the money will find its way to the intended targets. Some of them, however, have all the legitimacy of the wife of a recently deceased prince whose father has left him a $1.5 billion goldmine and who needs your help to unlock an inheritance in six easy steps.

A battle of trust

On crowdfunding platforms — and especially ones that involve charitable giving — trust is the No. 1 currency. This puts GoFundMe and its peers in a difficult position. The media spotlight certainly helps raise awareness of the platforms, and successfully raising $10 million for the Louisiana flood victims is a fantastic story. On the flip side, GoFundMe is also regularly in the media’s spotlight with a slowly rising tide of headlines of fraud on the platform, giving some potential donors pause for thought before they hit the “Donate Now” button.

“GoFundMe wouldn’t exist without the empathy of our donors, and the GoFundMe Guarantee is about protecting their generosity with the industry’s first and only guarantee,” Rob Solomon, GoFundMe CEO said. “We want every donor to know that we have their back. It’s a big deal to give, and we want there to be complete peace of mind when you donate on our platform.”

GoFundMe’s PR team is eager to point out that fraud is exceedingly rare, claiming that less than 0.1 percent of all campaigns awaken cause for concern. In its battle to win over the hearts and minds of the backers and the media, offering a guarantee will go a long way, but the guarantee is limited in a few important ways, which I believe weakens the company’s commitment to tidying up its image.

The guarantee is limited to campaigns starting this week, and is limited to $1,000 per donor and $25,000 per recipient. It is further limited to campaigns where the recipient is based in the U.S. or Canada. The company’s guarantee doesn’t cover U.S. or Canadian donors giving to campaigns in the other dozen or so other countries supported by the platform. GoFundMe cites “technical and logistical” reasons for not extending the guarantee beyond North America, but hints that it hopes to add more countries to the list over time.

It is worth pointing out that the $25,000 limit is per recipient. This matters: In the earlier example of the Louisiana flooding, if we assume 6,400 campaigns created and a 0.1 percent fraudulent campaign rate, it is the difference between $25,000 or $175,000 of funds donated to the cause covered under the company’s guarantee. A spokesman for the company tells me that this is unlikely to happen and that the company has measures in place to prevent fraud, and further points out that the vast majority of campaigns fall well inside those extreme limits.

“More than 99% of all GoFundMe donations are less than $1,000, protecting nearly every donor on the site,” says Bobby Whithorne, director of strategic communications at GoFundMe. “Additionally, it’s worth noting that the $25,000 guarantee for beneficiaries covers the vast majority of campaigns. We want to ensure folks get the help they need, which is why 25,000 is 15x the average campaign size.”

Fine, but that raises an obvious question: If GoFundMe is so confident of its fraud prevention algorithms, why put in a per-donor and per-recipient cap in the first place?

Offering guarantees on a crowdfunding platform is a great headline for the newspapers, but dig deeper and it makes less sense. Guarantees crack open the door to liabilities that crowdfunding platforms have traditionally fought hard to avoid. As such, it’s understandable that GoFundMe decided to limit the guarantees it is offering, but, in my opinion, it raises more questions than it answers. At the very least, “logistical and technical” issues aside, if you run a service that targets Australia and much of the EU, not extending the guarantee to those locales complicates the narrative needlessly.

If GoFundMe is so confident of its fraud prevention algorithms, why put in a per-recipient cap in the first place?

I like the GoFundMe platform and the world is richer for having ways of donating to causes efficiently, and I understand that the company needs to limit its exposure. Nonetheless, I can’t help but feel that the effort launched today falls short of what the company is trying to accomplish. The bottom line is that I am far from sure that donors are all that much safer today than they were a week ago.

UPDATED — This story was updated to include a quote from the company regarding the proportion of campaigns that would be covered by the guarantee.