A study from Cambridge University documents an immense drop in complaints against police officers when their departments began using body cameras. But even more surprising is that the data suggests everyone is on their best behavior whether the cameras are present or not.

The data was collected in seven police departments in the UK and US, and represents over 1.4 million hours logged by 1,847 officers in 2014 and 2015; the researchers published their data last week in the journal Criminal Justice and Behavior.

Officers were randomly assigned to wear or not wear cameras week by week (about half would be wearing them at any given time), and had to keep them on during all encounters. The authors used complaints against police as a metric because they’re easy to measure, an established practice in most police forces and give a good ballpark of the frequency of problematic behavior.

In the year before the study, 1,539 complaints in total were filed against officers; at the end of the body camera experiment, the year had only yielded 113 complaints. 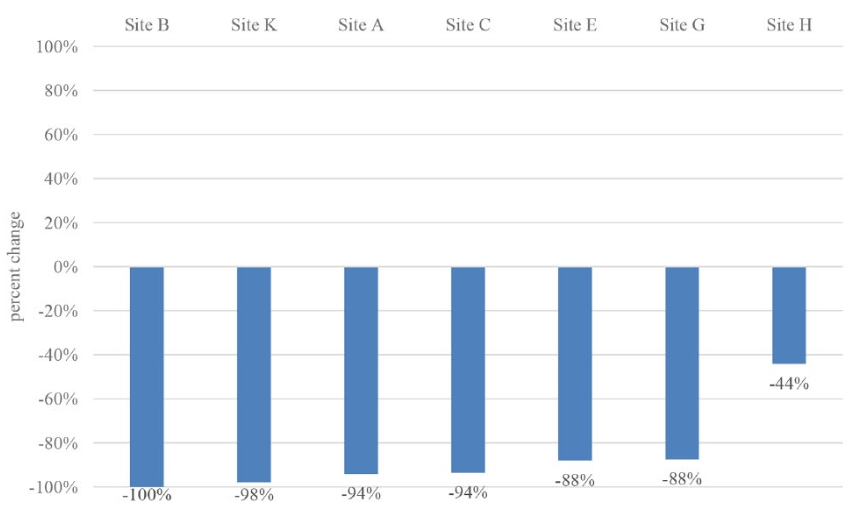 Figure from the paper showing how much complaints were reduced in each experimental site.

This would be enough to warrant further investigation or even deployment — complaints are not just indicative of misconduct, but expensive and time-consuming to address — but the study developed another wrinkle that may be even better news.

Against all expectations, there was no significant difference in complaints between officers wearing cameras that week and those going without.

Strange, right? It seems logical to expect that when the camera was actually present, it would act, as intended, as an impartial witness, cooling heads on both sides of an encounter. But complaints dropped even when officers weren’t using the cameras.

“It may be that, by repeated exposure to the surveillance of the cameras, officers changed their reactive behaviour on the streets — changes that proved more effective and so stuck,” explained the study’s lead author, Barak Ariel, in a Cambridge news release. “With a complaints reduction of nearly 100 percent across the board, we find it difficult to consider alternatives, to be honest.”

The researchers dub this effect “contagious accountability” — learning to do the right thing even when no one is watching.

Specifics on how exactly this is happening are unclear. Is the officer less confrontational to begin with, avoiding escalation? Or are suspects and complainants more wary of their conduct? Is it some combination of the two, or are even more factors involved? To determine these things would be a far more complex and subtle piece of research, but the study does suggest that officer behavior is probably the most affected, and that other effects flow from that.

Future research has plenty of directions to take, but the effect demonstrated here is robust and beneficial enough to take seriously and, for some police departments, it may be enough to tip the balance in favor of deploying cameras.

Ariel and co-author Alex Sutherland will be discussing their research at Cambridge’s Festival of Ideas in two weeks; if you’re in the area, swing by if you’d like to know more.