Typing on small screens can still be challenging, but today’s keyboard apps still focus on text entry over speech, despite the advances in voice-based computing and the increasing accuracy of speech recognition technology. Baidu wants to change that, with a new keyboard app called TalkType that prioritizes voice input over typing. The app was developed by Baidu Research, the Silicon Valley and Beijing-based division of Chinese search company Baidu, and the app will compete with similar third-party keyboards from both Google and Microsoft.

While search apps like Google’s have placed the microphone more prominently in an effort to increase people’s usage of voice input, keyboard apps still generally default to a traditional alphanumeric text input interface.

TalkType is different because it places a large microphone front-and-center in the application. That’s not to say it gives up the keyboard, by any means – naturally, there are still times when it makes more sense to type than talk, but the app’s user interface makes voice the starting point and first option.

“TalkType is the first full-function smartphone keyboard that is ‘voice first,’ not ‘voice also,'” explains Bijit Halder, project leader in Baidu Research’s Silicon Valley AI Lab, in an announcement about the launch. “Unlike conventional smartphone keyboard designs, where voice is targeted for occasional use and delegated to a small mic icon, TalkType is designed to make voice the primary mode,” he says.

Using voice input, you can not only turn your speech into text, you can also use voice commands to add punctuation to your sentences, like “comma,” “period,” “question mark,” and “exclamation point.”

The app also offers word suggestions as you speak. You can select single words or multiple words or sentences, moving either one or two fingers across the app’s trackpad. 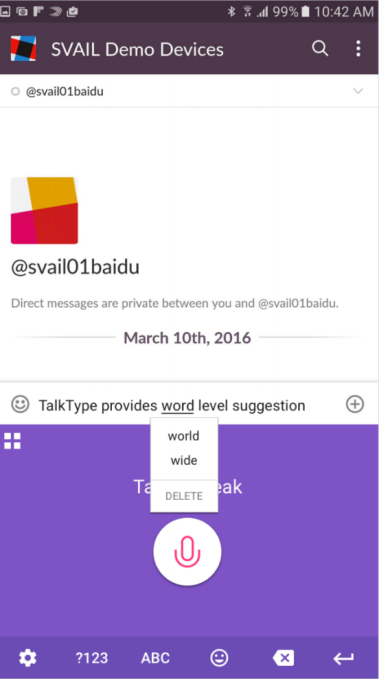 While the traditional keyboard may be de-emphasized in the new app, it’s not diminished. It supports multiple text entry methods, including swipe.

It also includes emojis and a “QuickShare” feature that lets you more easily send rich media through the app, like GIFs (powered by Giphy) or location information, like restaurants or shops from Yelp, among other things.

You can also share your current location with a friend via the app, and the company says the feature will be expanded with more functionality over time. 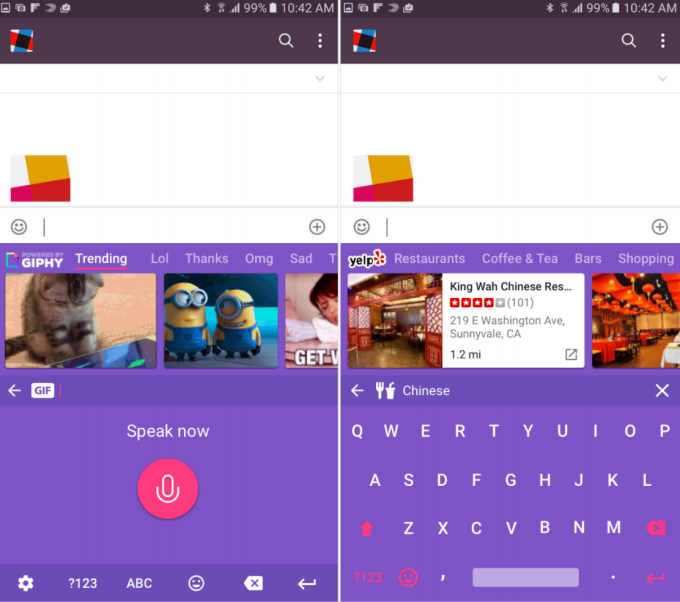 QuickShare brings to mind the integrated search and sharing capabilities found in Gboard, Google’s first mobile keyboard application. Similar to TalkType, Gboard lets you pull up restaurants, and other business info, then text it to friends. Integrated GIF sharing is included as well, as is a Google search engine for sharing other news, flight info, weather, and more.

But both Microsoft and Google’s apps focus on touch-based input – Microsoft with an innovative “wheel” interface for one-handed typing, for example.

Baidu’s TalkType instead starts you with voice, then allows you to navigate between different input methods – like speech, alphabet, symbols, and emoji – via its Quick Action bar. Here, you’ll also find other important buttons, like the return and delete keys.

You can also customize the app using built-in themes. 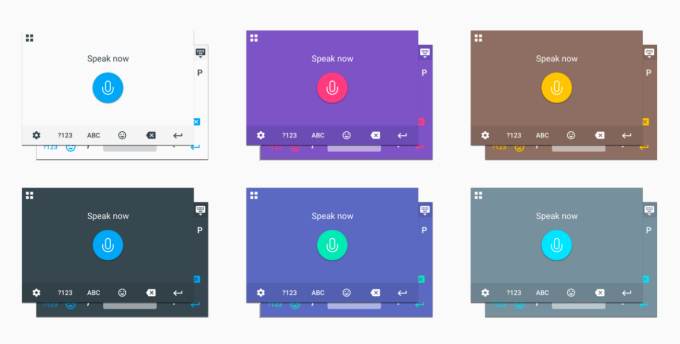 At Baidu since 2014, Dr. Ng has been working on Deep Speech, a deep learning-based speech recognition system. The company says that Deep Speech can be nearly three times faster and even more accurate than typing, citing a recent study from Stanford, University of Washington and Baidu Research. The study pitted Deep Speech’s results against a group of texters ages 19 to 32, who were entering text on their iPhones by hand.

Baidu Research has released other projects, like an AR platform DuSee and AI assistant Duer, but never a keyboard.

With the keyboard, Baidu claims sensitive information like emails and passwords entered via typing never leave the device, but the voice data is sent over a secure connection for transcription, as is a standard practice. This data is never shared, the company says.

TalkType, which was previously available to preview in its unfinished state, is a free download on Google Play.