It appears that Twitch-integrated games are not the only thing Amazon has been working on with the live-streaming site it owns. A small number of Twitch users are now reporting seeing a new section called “Twitch Prime” pop up in their profiles. According to a banner ad spotted by one user, Twitch Prime will include perks like “free loot every month,” as well as exclusive discounts on new-release games, ad-free viewing and more.

Update: an hour after we posted this, Twitch officially announced Twitch Prime

Well this is… interesting.

Apprently you get it as Amazon Prime member and gives you ad-free viewing. pic.twitter.com/8hzDQJhfjb

It appears the user, Dennis Sädtler, who’s based in Germany, was accidentally shown a test of Twitch Prime, as he encountered a “test game” that popped up with placeholder text along with a few more details about joining Twitch Prime. He says the content was only shown briefly, around 1 PM EST on Friday (17:00 UTC).

The screen also informed him that Twitch Prime was included with an Amazon Prime membership at no additional cost. 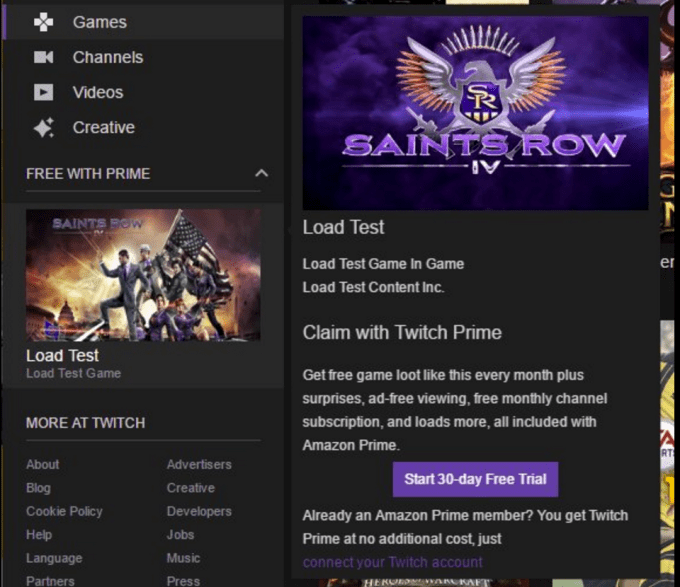 That means, like some of Amazon Prime’s other benefits such as Amazon Music or Prime Video, Twitch Prime will be sold both within the larger $99 per year Prime membership package as well as a standalone subscription. The banner touted a 30-day free trial, but Sädtler was not able to catch the pricing.

In addition to this sighting, another Twitter user, Tyler Kizner, found a non-functional link to Twitch Prime in his Settings section, next to “Channels & Videos,” also for a brief time.

The link replaced the “Turbo” section that was there previously. That would make sense if Twitch Prime was a rebranded Turbo — Twitch’s current paid tier that removes ads and offers other features for $8.99 per month.

Kizner said the “Twitch Prime” link was non-functional when clicked, and redirected him back to the Twitch homepage. (The banner link is https://twitch.amazon.com/prime, and continues to redirect at this time.)

Sädtler told us that he’s been data mining Twitch’s site for a few weeks, and caught a few other references to Prime, which was being referred to internally as “Premium.”

While services tend to test new features all the time, there’s a good chance that Twitch Prime is going to be announced today, given that TwitchCon, the live-streaming company’s annual conference, is currently underway.

Amazon acquired Twitch back in 2014 for over a billion dollars, but the gaming site has operated relatively independently until lately. In recent days, that has changed. For example, Amazon ran some of its pilot TV programs on Twitch, and yesterday it announced the first Amazon Game Studios titles that will feature Twitch integrations.