On the fence about whether your child is old enough for their own smartphone? A new app called Luna Launcher can help you warm to the idea, by offering a simple way to limit access to select apps and actions, including who they can call or text – a list you can restrict to family members, for example. Of course, because of the way it needs to interact with your phone’s operating system in order to restrict access, Luna Launcher is only available on Android.

One of Android’s advantages over iPhone is that it permits the use of launchers, which allow you to entirely customize the Android experience, whether that’s access to apps, as with these kid launchers, or just with new themes and layouts. iPhone, on the other hand, requires parents to look down apps and other activities using parental controls.

Today, there are a good handful of kid-friendly launchers for Android smartphones. However, some are focused on littler children or providing access to educational content or games, instead of just being a smart utility. 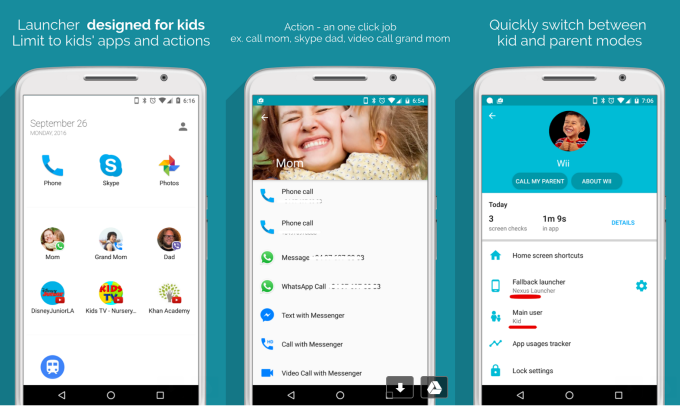 Luna Launcher, on the other hand, is appropriate for toddlers to preteens, as all it does is lock down access to apps and actions, like who they can call and text. In other words, if you don’t want your 10-year old spending all day texting friends, but want them to have a way to reach mom or dad in an emergency, Luna could be a good fit.

To get started, you create your child’s profile, pick the apps you’ll allow them to use, then choose the shortcuts you want to add, like those to message mom, call dad, etc., by selecting from your contact list. These actions can also including calls and texts from third-party apps like WhatsApp, Skype or Messenger.

When setup is complete, you can further customize the launcher experience by turning on or off the weather, picking a color for your theme, or choosing to disable access to the status bar and notification area.  You can also set daily quotes in Luna, and track usage. 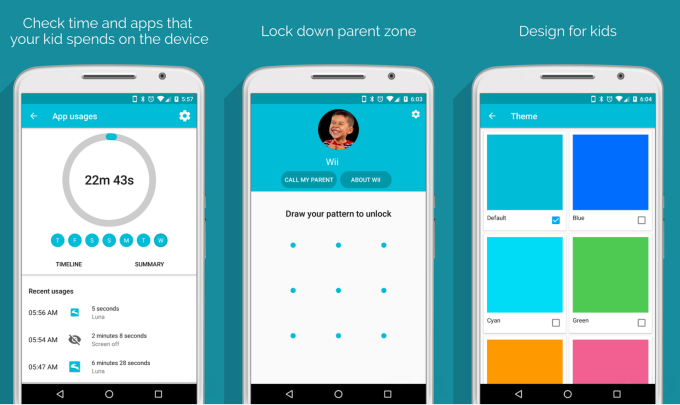 From the settings, you can configure very limited access to YouTube by adding only individual videos to the launcher’s homescreen, playlists, or favorite YouTube channels. This prevents the child from being able to surf across YouTube, where they might encounter more adult content. (You could also add the YouTube Kids app as one of your applications, if you’d rather not take the time to customize access so specifically.)

“The product comes from my real problem,” explains Hoa Le, one of Luna’s two indie developers, based in Vietnam. He says when he bought a new tablet, he decided to hand down his old Nexus 7 tablet to his son since.

“A few months later, I found out that my 5 year-old son spent too much time on the device, mostly playing games. I was struggling to find an app that helps me to set up a kind of ‘parental control’ on the device,” he says.

He and a college friend decided to build Luna as a side project for their own use, which is why the app is currently free.

Unfortunately, during testing, I found that after exiting the parental control screens, Luna would sometimes stop responding to presses. This was only fixed by rebooting the phone. Others don’t seem to have the same issue, so your mileage may vary. Hopefully, it’s a bug that will be addressed in a future update.

Luna Launcher is live now on Google Play and will be available on the Amazon Appstore soon.