Looking in the mirror or stepping on a scale can tell us much about our bodies and wellbeing, but not with the greatest precision.

Now, a Sydney, Australia-based company called mPort is bringing its mPod body scanners to gyms and malls in the U.S., where they think users will be interested in getting granular data about their bodies.

The mPod, which looks like a large photo booth or a small, modular changing room, requires users to step inside, lock the door and strip down to their underwear for a full body scan with infrared sensors.

A basic scan is free and use of the mPods is unlimited. Premium users who pay $5 a month or $40 per year can get a much more detailed report from each scan via the company’s apps.

A single, 7-second scan in an mPod creates a detailed avatar that a user can examine from all angles along with some basic data including height, weight and body mass index.

A premium scan gives users a comparison of body scans over time, and details like body fat composition, hip to waist ratio, and many other measurements that indicate physical fitness or a lack of it.

All together, mPort CEO Dipra Ray said the mPod gathers 200,000 data points about a user’s body to construct a scan and measurements displayed in the app.

People like the mPods, Ray said, because “It’s like a changing room experience. It’s private and comfortable.” That experience compares to going to a personal fitness trainer who may use everything from scales and measuring tapes to calipers to generate a similar report. 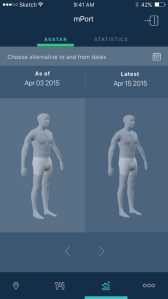 The mPod app lets users see whether or how their bodies are changing over time as they try different approaches to fitness.

MPods are already installed in shopping centers and gyms in Australia, where 85,000 people have already gotten scanned, Ray said.

But mPort now has a new deal to distribute and maintain its mPods at L.A. Fitness gyms across the U.S.

The company competes with hardware makers such as Fit3D, which sells its professional body scanners to fitness trainers, and Naked Labs which makes a 3-D body scanning mirror for home use.

Besides giving users data that could influence their dietary choices and fitness routines, Ray said the mPods are gathering data that could prove incredibly useful in helping users shop for custom-tailored clothing online, or just avoid ordering items they later need to return due to improper fit.