Pearl’s goal as a company is to make modern tech available on older cars, and its first product is the Pearl RearVision, a wireless backup camera system that’s easy to install and uses your smartphone as the display. Convenience comes at a cost, though – $499.99, which is more than your average wired backup camera kit, even including a monitor. But Pearl has some unique features that help it stand alone.

The out-of-box experience for Pearl’s RearVision is really well designed. Even packaging is done right, with a folding two-sided box that provides all your necessary hardware, along with the OBD-II dongle and smartphone mounting device on one side, and your license plate cover/camera combo on the other. With the included instructions, I had my old license plate cover (still the dealer one) removed, and the RearVision installed in under five minutes. 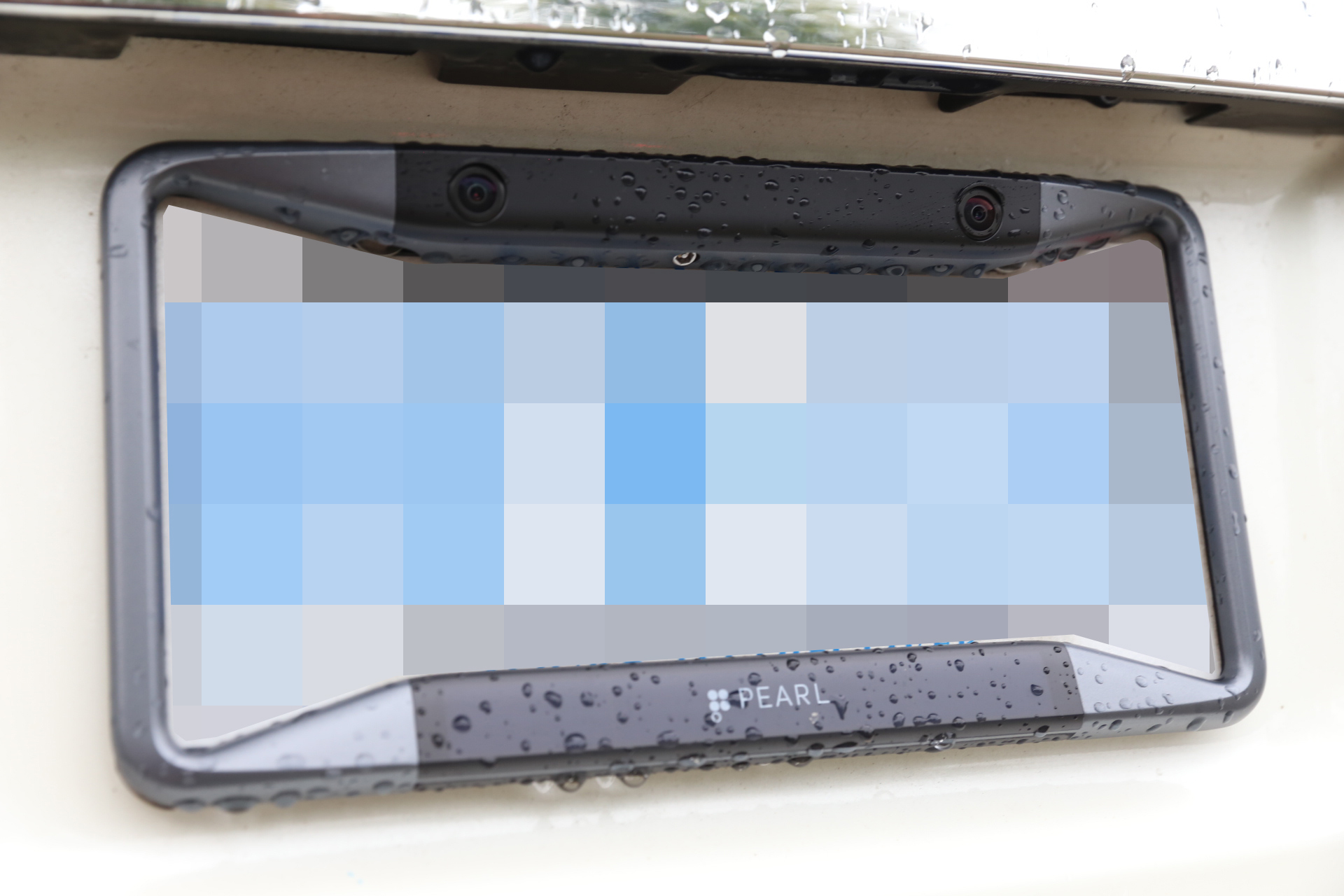 Inside the car, all you really need to do is plug in the OBD-II port, which is usually located somewhere under the dash (just Google your car make, model and year plus “OBD-II port” to find out where yours is located if you’re not sure). The included dashboard mount for your phone is optional, but it’s a fairly well designed one, with a ball-type pivot mount for viewing at various angles, and both vent and stick-on dash mounting options.

RearVision also ships with stick-on plates that you affix to the back of your smartphone to get them to attach to the mount. These worked well in some cases (Galaxy S7), but in others had trouble sticking to the smartphone reliably, as with the new iPhone 7 Plus in matte black. If you have an existing mounting option, or if you attach the plates via more permanent adhesive to a case, you should have no problem.

As for the app, once installed it routes you through sign-up, and then connecting to the local Wi-Fi network generated by RearVision, and gets you connected via the backup Bluetooth 4.0 transmitter designed to supplement the Wi-Fi on iPhone devices.

A whole new world back there

Once connected, the RearVision app in landscape will show you a full-screen view of what the cameras in the license plate holder is seeing, with a 175-degree viewing angle. You can toggle between the full fish-eye experience, or a warp-corrected view that fills the display corner-to-corner with the space behind your car. You can also pivot the view up or down to get a better look at more of the sky, or more of the ground as needed. 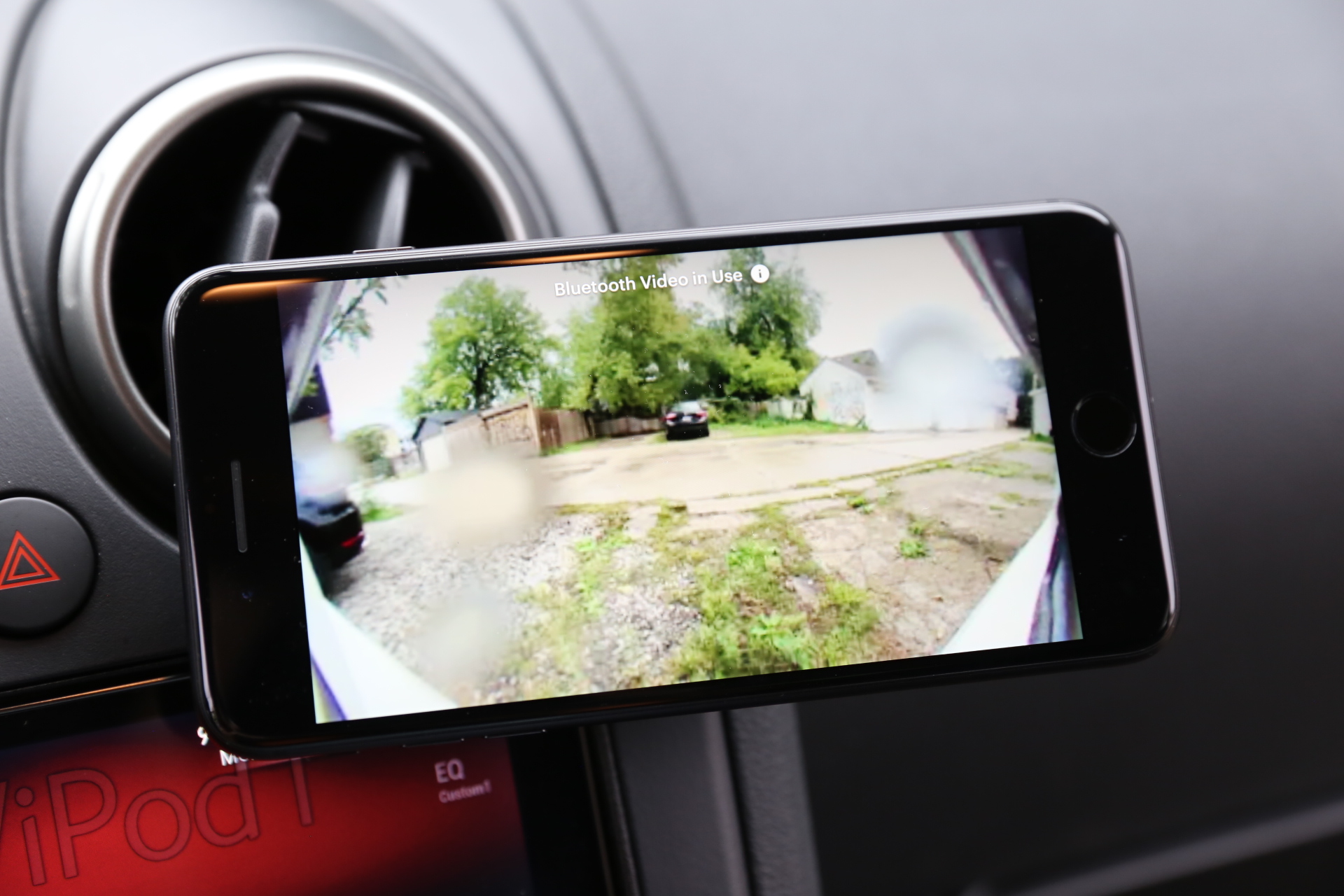 In portrait, the top half of your screen shows a cropped look immediately behind you, and the bottom shows the full wide-angle shot. The image is crystal clear, especially on modern smartphone devices, and with no noticeable lag in my testing despite the Wi-Fi connection. When it fails back to Bluetooth, the image is considerably degraded by still usable, but on my iPhone 7 Plus at least, it also dropped out on occasion. Bluetooth is designed as a backup, however, and not the main show. 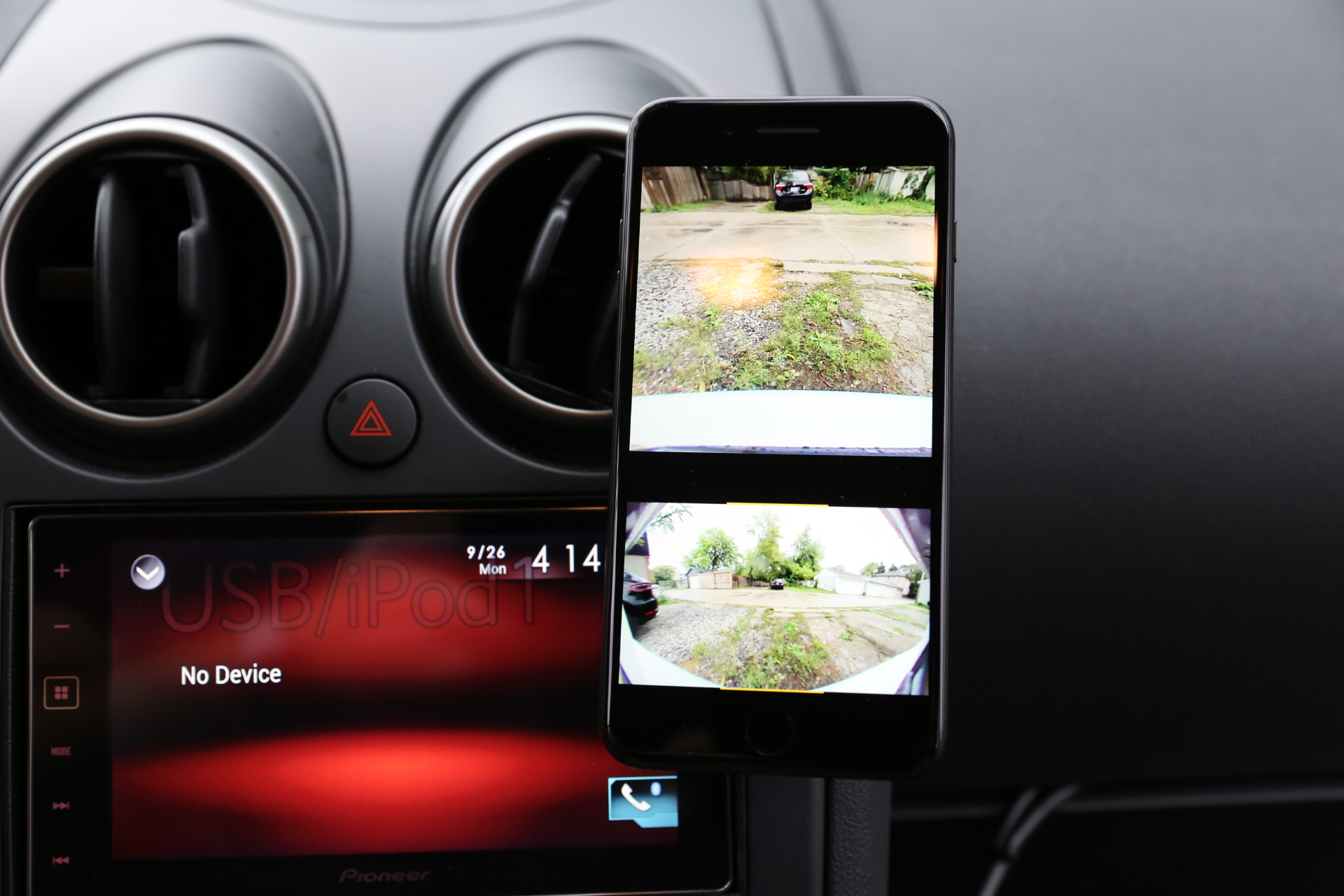 The view is equally impressive at night, where one of the cameras equipped with IR sensors easily illuminates the scene. From an optics perspective, thanks to RearVision’s use of 1/3″ CMOS sensors, with large pixels and an f/2.0 aperture, the view is better than what you’d get from any OEM backup cam system I’ve used thus far, let alone inexpensive aftermarket options from Amazon.

When you accelerate forward, the video cuts out once you reach 10 mph, which makes it feel more native. And remember, all of this is powered via solar, so there’s nothing to charge or wire into your vehicle.

App experience polished in places, with room to grow

Using the RearVision app is great in some places, but frustrating in others. The use of visual ripple effect notifications to alert you when something is near to your back bumper, which get stronger as you get closer, is a nice touch, for example. And even with the app not open, you’ll get audio alerts from the OBD-II dongle from the RearVision’s integrated backup sensor.

A built-in app launcher that you can activate at any time with a double tap, and which comes up automatically when the video feed cuts out after 10 mph is also smart, and you can preload up to four selections (like Waze or Google Maps for navigation) that you then tap to launch directly. It’s almost like having a pared down version of Android Auto or CarPlay built right into the app. 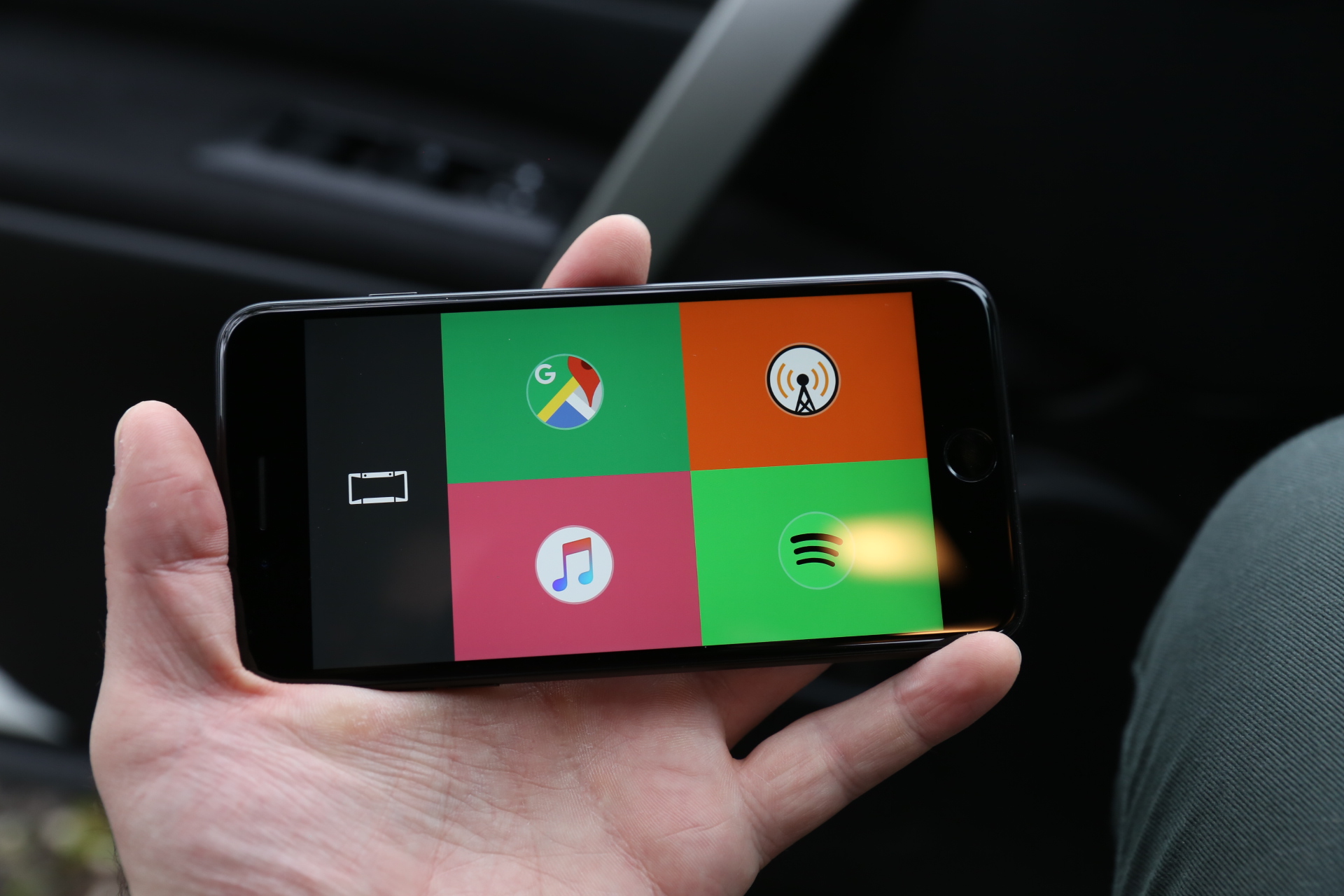 The main issues I have with the app as it works currently are a lack of notifications, and the absence of any kind of auto-launch capability. No notifications mean it’s a manual process of launching the app every time you get in the car, either on Android or iOS. This also means on iOS that you have to manually switch networks to the dedicated RearVision one, or be okay with the sub-par Bluetooth connectivity experience. On Android, the device will automatically switch to Pearl’s network when in range, but it still doesn’t do anything as fancy as auto-launching the app.

Pearl CEO Bryson Gardner tells me that on iOS, they plan to introduce push notifications that alleviate some of this, though the Wi-Fi connection issue is system-level and can’t be worked around right now. On Android, the plan is to actually have the app launch automatically. The company also hopes to improve Bluetooth video reliability and image quality, so you might not even need to use WiFi on an iPhone.

The planned updates are part of the value offering, according to Pearl – one of its selling points is that the team intends to support it with more features and improvements over time, which is not something you typically get from a backup camera. Another thing on the road map are Path Lines, which it intends to introduce once it has more data back from real-world use.

Placing a high value on hindsight

The Pearl RearVision is definitely a premium device, with a great industrial design, and software that’s minimal (fewer distractions in the car are always good) but still effective. It has some shortcomings that do make using it less convenient than throwing the shifter into reverse and looking at a video feed that pops up automatically, but it also requires no installation, which saves you either time or money, and it’s portable vehicle to vehicle, with a broad list of compatible cars.

Promised updates are the key ingredient here, as Pearl does seem fully intend on this becoming a continually improving product. But it’s still for a specific subset of users – those who value quality and craftsmanship and are willing to pay for it, but who also don’t have a modern vehicle with its own backup camera, and don’t plan on getting one anytime soon. Still, if that describes you, there are no aftermarket backup camera solutions that have the technical chops or the (pun inbound) vision of the Pearl RearVision.